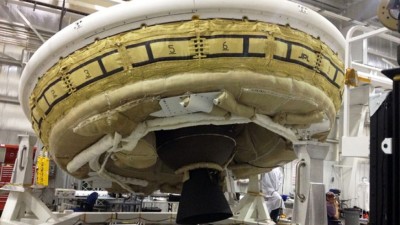 In this undated file photo provided by NASA, a saucer-shaped test vehicle known as a Low Density Supersonic Decelerator is shown in the Missile Assembly Building at the US Navy’s Pacific Missile Range Facility at Kekaha on the island of Kauai in Hawaii.AP/NASA
Share:

After several weather delays, NASA on Saturday launched a helium balloon carrying a saucer-shaped vehicle high in Earth’s atmosphere to test technology that could be used to land on Mars.

Since the twin Viking spacecraft landed on the red planet in 1976, NASA has relied on the same parachute design to slow landers and rovers after piercing through the thin Martian atmosphere.

The $150 million experimental flight tests a novel vehicle and a giant parachute designed to deliver heavier spacecraft and eventually astronauts.

Viewers around the world with an Internet connection followed portions of the mission in real time thanks to cameras on board the vehicle that beamed back low-resolution footage.

After taking off at 11:40 a.m. from the Pacific Missile Range Facility on the Hawaiian island of Kauai, the balloon boosted the disc-shaped vehicle over the Pacific. Its rocket motor should then ignite, carrying the vehicle to 34 miles high at supersonic speeds.

The environment this high up is similar to the thin Martian atmosphere. As the vehicle prepares to drop back the Earth, a tube around it should expand like a Hawaiian puffer fish, creating atmospheric drag to dramatically slow it down from Mach 4, or four times the speed of sound.

Then the parachute should unfurl and guide the vehicle to an ocean splashdown. At 110 feet in diameter, the parachute is twice as big as the one that carried the 1-ton Curiosity rover through the Martian atmosphere in 2011.

The test was postponed six times because of high winds. Winds need to be calm so that the balloon doesn’t stray into no-fly zones.

Engineers planned to analyze the data and conduct several more flights next year before deciding whether to fly the vehicle and parachute on a future Mars mission.

“We want to test them here where it’s cheaper before we send it to Mars to make sure that it’s going to work there,” project manager Mark Adler of the NASA Jet Propulsion Laboratory said during a pre-launch news conference in Kauai in early June.

The technology envelope needs to be pushed or else humanity won’t be able to fly beyond the International Space Station in low-Earth orbit, said Michael Gazarik, head of space technology at NASA headquarters.

Technology development “is the surest path to Mars,” Gazarik said at the briefing.