Lebanon has a ‘prince’ ( Emir’) and Muslims have an ‘Islamic Caliph’ 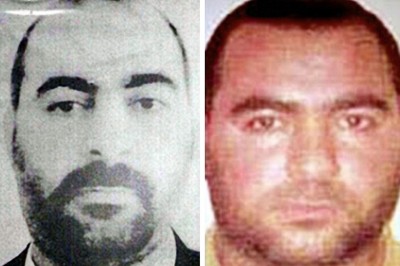 The Islamic State of Iraq and Levant or al-Sham ( ISIL or ISIS) has appointed a man who was identified as Abdel Salam al-Ordoni as the organization’s Emir or “prince,” for Lebanon, LBC TV reported on Sunday.

And what a peaceful prince !!!!

According to the report , Ordoni gave orders to Al-Monther al-Hassan ( the middle man between the ISIL and the two suicide bombers who were behind the explosion at the Duroy Hotel in Raouche , western Beirut ), to provide them with explosives. LBCI said.

And what a very promising future indeed !!

According to the same report ISIS has also established a training camp for youths in a border area between Syria and Turkey to be sent to Lebanon for suicide attacks.

Al-Monther al-Hassan is on Lebanon’s most wanted list . General Security circulated his photo. He was born in 1990 in Lebanon’s Akkar region and carries also a Swedish citizenship. The agency warned that al-Hassan is in possession of two vehicles—an old beige Nissan or a gray 2005 Mercedes—that might be rigged with explosives.

“According to the plan devised for the suicide bombers by al-Hassan, the attack on al-Saha Restaurant (in Hezbollah’s stronghold in Dahieh) required one of them to enter the restaurant and open fire from a machinegun at the biggest number of customers at the time of iftar before blowing up his suicide vest,” LBCI’s report said.

“The second suicide bomber would blow himself up when medics and citizens gather for rescue operations,” it added.

In another development ISIS announced Sunday the establishment of a “caliphate,” or Islamist state and in an audio recording that was distributed online, ISIS declared its chief Abu Bakr al-Baghdadi as “the caliph” and “leader for Muslims everywhere.”

ISIL said it would impose the caliphate on areas already conquered in Syria and Iraq.

“The Shura (council) of the Islamic State met and discussed this issue (of the caliphate)… The Islamic State decided to establish an Islamic caliphate and to designate a caliph for the state of the Muslims,” said ISIL spokesman Abu Mohammad al-Adnani.

“The words ‘Iraq’ and ‘the Levant’ have been removed from the name of the Islamic State in official papers and documents,” Adnani said, describing the caliphate as “the dream in all the Muslims’ hearts” and “the hope of all jihadists.”

Adnani demanded that “all Muslims pledge allegiance to the caliph.”

An activist in Raqa, the bastion of ISIL, told AFP via the Internet: “Large convoys of ISIL members arrived in the city just as the declaration was issued, to celebrate their caliphate.

“There was very intense gunfire. ISIL supporters were shooting in the air with joy,” Hadi Salameh said.

According to Wikipedia , a caliphate ( khilāfa, meaning “succession”) is an Islamic state led by a supreme religious and political leader known as a caliph – i.e. “successor” – to Muhammad. The succession of Muslim empires that have existed in the Muslim world are usually described as “caliphates”. Conceptually, a caliphate represents a sovereign polity (state) of the entire Muslim faithful (theUmmah, i.e. a sovereign nation state) ruled by a single caliph under the Constitution of Medina and Islamic law (sharia).[citation needed]

In its earliest days, the first caliphate, the Rashidun Caliphate, exhibited elements of direct democracy (shura).[1] It was led, at first, by Muhammad’s immediate disciples and family as a continuation of the religious systems he had introduced.

The Sunni branch of Islam stipulates that as a head of state, a caliph should be elected by Muslims or their representatives. Followers of Shiite Islam, however, believe a caliph should be an Imam chosen by God (Allah) from the Ahl al-Bayt (the “Family of the House”, Muhammad’s direct descendents). From the end of the Rashidun period until 1924, caliphates, sometimes two at a single time, real and illusory, were ruled by dynasties. The first of these was the Umayyad dynasty, followed by the several other sometimes competing claimants and finally the Ottoman dynasty.

The caliphate was “the core leader concept of Sunni Islam, by the consensus of the Muslim majority in the early centuries”.

It was abolished when the Ottoman empire collapsed in 1924.