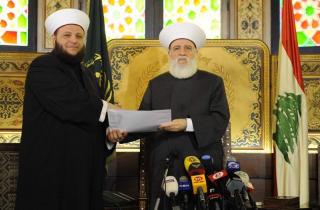 There was confusion in the city of Sidon in south Lebanon over a statement that was issued by the municipality of Abra, calling on people who do not fast during the Muslim holy month of Ramadan to abstain from eating in public in the city.

But Sidon’s legitimate Mufti Salim Soussan denied being behind the statement , according to a report by NOW news website

“The Abra municipality statement is rejected by the legitimate mufti of Sidon and its outskirts, Sheikh Salim Soussan. Sidon’s Dar al-Fatwa has nothing to do with this statement,” a well informed source told NOW.

The source also said that “the illegitimate” Mufti of Sidon, Sheikh Ahmad Nassar, had asked the municipality chief in Abra to issue the controversial statement.

“Nassar asked the municipalities of all Christian villages in Eastern Sidon to issue this statement, in accordance with an order made by Qabbani,” the source said.

“Hezbollah has called [for such step] to portray cooperation among Muslims,” he added.

The controversial statement was condemned by Lebanese Christians all over the country as well as by many Muslims, who deemed it oppressive towards non-Muslims and non-fasting Muslims.

The then-caretaker Prime Minister Najib Miqati, former prime ministers Omar Karami and Fouad Siniora, and then-PM-designate Tammam Salam discussed the results of the Higher Islamic Council elections after the Grand Mufti announced at Dar Al-Fatwa that members had won the elections by acclamation.

The former prime ministers decided that the HIC election results will not be published in Lebanese newspapers and that they will keep meeting to discuss the measures that “need to be taken to confront illegal practices and preserve the Sunni sect through the institution of Dar al-Fatwa.”

Miqati had previously informed the Grand Mufti that any election of members to the council would be considered null and void as they contradict a decision of the judiciary that stipulated the suspension of the Higher Islamic Council’s elections.

In November 2012, Qabbani called for a new election for the HIC, but clerics in the body allied with the Future Movement opposed the move, after which the Grand Mufti reversed his decision and called for a new election in late February. The mostly Sunni Future Movement and Qabbani are at loggerheads over the management of the Dar al-Fatwa religious body.

The mufti later condemned the calls made by caretaker PM Najib Miqati for the extension of the term of the current council.