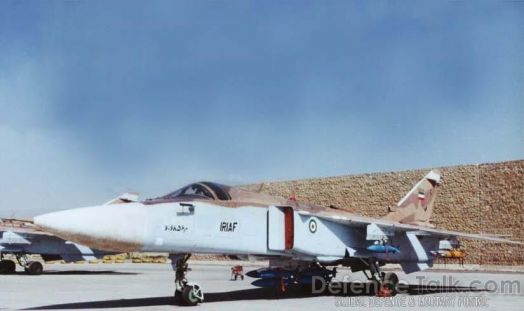 Frustrated with the pace of U.S. jet and attack helicopter deliveries, the Iraqi government has resorted to negotiating the return of decades-old planes from Iran as it desperately tries to cobble together air power to turn the tide against al-Qaeda-inspired insurgents.

Iran has been “receptive” to the demands and is working on refurbishing an unspecified number of jets, Ammar Toma, a member of the Iraqi parliament’s defense and security committee said Friday. Government and military officials and two other lawmakers confirmed the negotiations.

The planes are among more than 100 Iraqi jets, including Soviet-made Sukhoi bombers and MiGs, which were flown to Iran by fleeing Iraqi pilots during the 1991 Gulf War. If delivered, they would join secondhand fighters from Belarus and Russia to create a ragtag air force that Prime Minister Nouri al-Maliki is hoping can help reverse insurgent gains.

Iraq is desperate for air power to strike militants from the Islamic State of Iraq and Syria (ISIS) and has expressed annoyance that long-awaited U.S. contracts for F-16 fighters and Apache helicopters are yet to be fulfilled.

The United States is flying armed drones over Iraq in case the 300 military advisers it is dispatching there need protection, Rear Adm. John Kirby, the Pentagon press secretary, said Friday.

He acknowledged that the drones also could be used for airstrikes if President Obama decides to take military action against ISIS targets — a possibility the White House is still contemplating.
But with the United States holding back on strikes and no jets of its own, Iraq has been forced to rely on fixed-wing-propeller planes and helicopters armed with U.S.-supplied Hellfire missiles.for aerial attacks.

Despite its limited air power, the Iraqi military has managed to go on the offensive against ISIS in some areas in recent days, launching a commando attack to retake Tikrit and securing the road from Baghdad to Samarra this week.

With its first U.S.-supplied F-16s not expected to arrive until fall, the planes from Iran and secondhand jets from Russia and Belarus are an unsatisfactory stopgap, officials say.

“These planes are over 20 years old,” said a senior military officer, who spoke on the condition of anonymity because he is not authorized to discuss the negotiations. He voiced concerns that using the outdated technology could mean large numbers of civilian casualties. “Even when you get them, you still need training for pilots. They aren’t just taxis that one can just jump into and drive,” he added, pointing out that many of the Iraqis who were trained to fly them are now too old.

Iran impounded about 130 planes after fleeing Iraqi pilots sought sanctuary in the country during the 1991 Gulf War, Iraqi officials say. The aircraft include 24 Soviet-made Su-24s, 24 French Mirage F1s and 12 MiG-23s.

The Iranians argued that the aircraft amounted to reparations for the 1980-1988 Iran-Iraq War.

Despite the sensitivities, Iran now appears likely to return them, said Toma and one senior military official.

“Iran is worried that the state might fall, so they will help any way they can,” said the military official, who spoke on the condition of anonymity because he is not authorized to discuss the negotiations. He said regular visits by Qasem Soleimani, the commander of Iran’s elite Quds force, were evidence of their firm backing.

Some of the planes have been junked, but the Su-24s are serviceable, and some have been absorbed into the Iranian air force and kept in working order, said analyst Michael Knights of the Washington Institute.

“It could be a sneaky way of using Iranian air power,” he said. “They could keep Iranian pilots flying that stuff — all you are changing is what’s painted on the wings, really.”

An Iraqi government official, who spoke on the condition of anonymity because the negotiations are not public, confirmed that the planes had been requested but would not give further details.

Kirby said U.S. military aircraft — including the drones — are conducting about 30 to 35 reconnaissance missions over Iraq daily. He declined to identify what types of drones are flying over Iraq or say where the aircraft are based. The Air Force has Predator and Reaper drones based in Turkey, Qatar and the United Arab Emirates, although it is unclear which of those countries may have given permission for the U.S. military to use its territory for armed operations in Iraq. Predator and Reaper drones are primarily used for surveillance but can be armed with Hellfire missiles and other weapons.

“If we had air support, none of this would have happened,” Maliki said in a BBC interview Thursday. He said that Iraq was “deluded” when it signed contracts with the United States, and that secondhand planes from Russia and Belarus should arrive in the next few days.

Under pressure on the battlefield, Maliki is also desperately attempting to cling to power after his political bloc won the biggest share of the vote in April elections.

But with many blaming him for helping bring about the divisions cleaving the country, even parts of his own political bloc are refusing to back him as a candidate. Politicians are locked in negotiations ahead of the first session of Iraq’s newly elected parliament Tuesday.

In a sermon Friday, Iraq’s most senior Shiite cleric, Grand Ayatollah Ali Sistani, urged political leaders to unite and form a government in accordance with the timeline laid out by the constitution.

“Maliki’s chances are low,” said Toma, a lawmaker with the Shiite Fadhela party, adding that the loss of backing from both the United States and Iran had weakened Maliki’s position.

“The Iranians are being pragmatic, just like the U.S., about the importance of the stability of Iraq. If that requires replacing a person in their post, they wouldn’t mind it.”