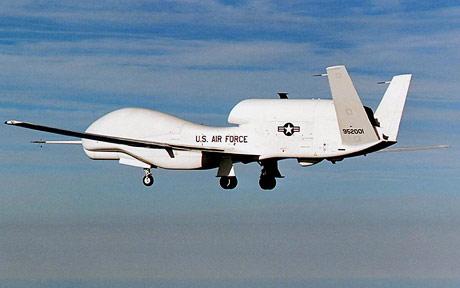 Armed US drones are flying over Iraq to protect American military advisers on the ground, US media report.

They support other manned and unmanned aircraft making 30-40 surveillance missions each day, as US military assessment teams begin work below.

The news comes as Iraq’s most influential Shia cleric called for a prime minister to be appointed soon.

Grand Ayatollah Sistani said that key government positions should be agreed by the time the new parliament meets on Tuesday.

There have been calls inside and outside Iraq for a national unity government but the various political factions have been unable to reach a deal.

Large parts of Iraq were seized by Sunni militants earlier this month.

US President Barack Obama said last week he was ready to take targeted military action in Iraq if necessary.

He said 300 military advisers were being deployed in Iraq and in neighbouring countries to help the Iraqi security forces.

Half of that contingent arrived earlier this week, their primary job being to assess the capabilities of the Iraqi forces and advise on what should be done.

They are in a position to call in air strikes against the militants if it is deemed necessary.

On Friday, US officials told Reuters a joint Iraq-US operations centre in Baghdad staffed by about 90 military personnel will open next week.

When asked about the drones, Commander Bill Speaks at the Pentagon told the BBC: “I can only confirm that we are continuing to fly both manned and unmanned ISR [intelligence, surveillance and reconnaissance] missions over Iraq.”

Earlier this week, the Iraqi government said that Syria was conducting airstrikes against militants on the Syria-Iraq border.