Iraq crisis: Maliki’s call for unity may be “too little too late “ 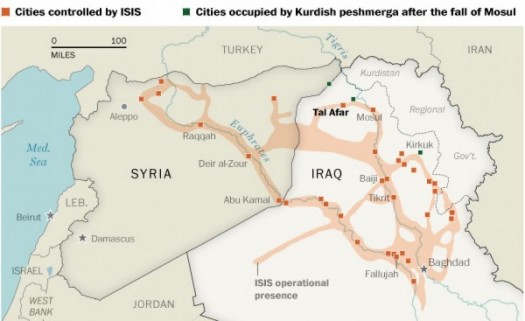 How ISIS is carving out a new country
Share:

Embattled Iraqi Prime Minister Nouri al-Maliki appeared to bow to U.S. pressure on Wednesday, striking a conciliatory tone as he called for political unity to tackle al-Qaeda inspired militants as they swept forward in the western province of Anbar.

Maliki called on political parties to lay aside differences before the first session of Iraq’s newly elected parliament, expected to take place next week. Secretary of State John F. Kerry described the comments as “precisely what the United States was encouraging.”

But while Maliki’s comments may have gone some way to appeasing the United States, for most of his political rivals it is too little, too late. With conflict threatening to tear apart the country, some are trying to rally support around alternative leaders, raising questions as to whether Maliki can cling on.

As the prime minister spoke Wednesday, insurgents from the Islamic State of Iraq and Syria (ISIS) pressed forward in Anbar, closing in on the provincial capital of Ramadi and on Haditha, home to a huge hydroelectric dam that is crucial to the country’s power supply.

“The situation in Anbar is on the edge of a cliff,” said Mohammed Fathi, a spokesman for the local Sunni al-Wafa political party based in Ramadi, which lies 80 miles west of Baghdad. “It won’t improve until we have a real political process. We are all partners in this country.”

The push toward the dam on the Euphrates river, the second largest in Iraq, raised fears that the floodgates could be opened by insurgents, or the army in order to repel them. Earlier this year, swathes of land west of Baghdad was flooded and tens of thousands of people were displaced after militants seized the Fallujah dam.

But it’s also possible it wants to take control of the power plants it powers, said Khalid Salman, head of the Haditha local council. While ISIS has made strides in gaining territory, it is struggling to provide services, which risks alienating the local populations that it relies on for support to maintain its gains. In the northern city of Mosul, overrun by militants earlier this month, residents complain of frequent power and water outages, combined with severe fuel shortages.

“Of course they want to control the dam, which is very important, not only for Anbar, but for all of Iraq,” he said. He said that government soldiers were being dispatched to help reinforce a contingent sent earlier to protect the dam.

As the United States mulls strikes, ISIS has consolidated its control in western Iraq, striding toward its aim of creating an Islamic caliphate. It now has a clear run across the western border deep into Syria, with its territory stretching to the Jordanian and Saudi frontiers.

The fighting has quickly developed into a regionalized conflict, with Syria carrying air raids on a town near the border on Tuesday.

Salman said ISIS militants had seized most of the al-Jazira area north of Ramadi. The gain was confirmed by a Ramadi security official, who declined to be named because he ewas not authorized to speak to the media.

Secretary of State John F. Kerry conferred with Kurdish leaders in northern Iraq as fighters from local Sunni tribes wrested control of at least part of Iraq’s largest oil refinery after battling for days with government troops over the key facility.

Amid the chaos, Washington has urged Baghdad to push forward with forming an inclusive government before it provides military support.

President Obama has dispatched 300 military advisers to Iraq and has not ruled out airstrikes. But in Washington on Wednesday, questions were raised over the legality of strikes without congressional approval, which the Obama administration says it does not need to seek.

No doubt mindful of U.S. demands, Maliki’s speech on Wednesday, which came just two days after he met with Kerry in Baghdad, was in contrast to his public declarations earlier in the crisis, which have appealed to religious motivations and called for citizens to protect the country’s shrines.

The prime minister stressed instead that Iraqis “desperately need a united national stance to defy terrorism.” He rejected a proposal by Ayad Allawi, a rival secular Shiite, for a “national salvation” government, saying such a power-sharing agreement would be unconstitutional.

Maliki said he was committed to moving forward with forming a government as laid out in the constitution.

“In the prime minister’s remarks today he did follow through on the commitments that he made in our discussions,” Kerry told reporters in Brussels. He stressed that it is up to Iraqis to decide if Maliki would lead the new government.

Though Maliki’s party won the largest share of seats in April elections, he needs to make a majority to form a government. It remains unclear if he can do so, having alienated former political allies.

Baghdad is locked in intense political horse-trading ahead of the first session of parliament, which is expected July 1.

Ameer al-Kenani, a parliamentarian with Shiite cleric Moqtada al-Sadr’s political party, said that unless Maliki’s bloc come up with an alternative candidate for the premiership by Thursday, it would put forward its own alternative. He said his party has an agreement with another Shiite bloc led by Ammar al-Hakim, to back a single candidate.

From Ramadi, Fathi, the Sunni politician, also expressed strong opposition to Maliki’s continuing in office. “We need new faces,’’ he said. “We don’t deny that there is ISIS here, but there is also an uprising against oppression by Maliki. There can’t be reconciliation until he goes.”