Syria, Iran step up their involvement in Iraq as conflict intensifies 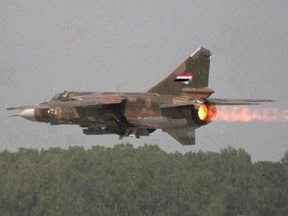 The news comes as the first U.S. Special Forces arrived in Baghdad Tuesday, with 40 troops assigned to Iraq as part of a group of 300 military advisers President Obama said he would deploy to the country.

According to local officials in Anbar province, at least 57 Iraqi civilians were killed and more than 120 wounded on Tuesday after the Syrian regime bombed the area, CNN reports. Local officials said the planes bore the Syrian flag and attacked markets and fuel stations in the region.

The Washington Post reported that the Syrian government bombed Sunni militant targets in Iraq, while initial Iraq media reports said the attacks near Iraq’s western border were carried out by U.S. drones.

The attack marks the first serious involvement in the current Iraq crisis by President Bashar Assad’s regime. The Syrian air force has been accused of widespread bombings of civilians within the nation’s borders.

Citing anonymous military officials, the New York Times reports that Iran has been sending two daily flights of 70 tons of military equipment and supplies to Iraq, in addition to launching a small fleet of drones over the country. Both Iran and the U.S. oppose the Sunni militia waging an offensive in Iraq.

The Pentagon said late Tuesday that it is scheduling 30 to 35 surveillance flights over Iraq each day. About 90 troops have been assigned to Baghdad’s joint operations center.

Sunni militants allied with the Islamic State in Iraq and Syria (ISIS) surrounded one of Iraq’s largest air bases on three sides Wednesday and were mounting a major attack after seizing several oilfields in the north of the country, Reuters reports.

Meanwhile, a diplomatic solution to the conflict seems unlikely in the short term, with Iraqi Prime Minister Nouri al-Maliki refusing Wednesday to form a broad-based government to placate the Sunni insurgency, the Wall Street Journal reports.