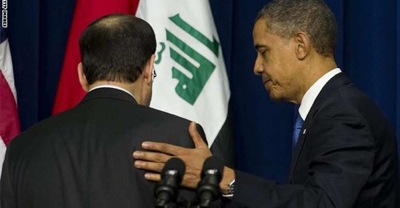 “It’s not our job to choose Iraq’s leaders,” said President Obama in statement from the White House today, as whatever’s left of the country’s stability continues to crumble. With his frustration at Prime Minister Nouri al-Maliki barely concealed, Obama added, “Above all, Iraqi leaders must rise above their differences and come together around a political plan for Iraq’s future.” The AP reports that the U.S. continues to weigh a call for Maliki to resign in an attempt to prevent an all-out civil war.

Obama announced he would be sending “a small number of additional American military advisers, up to 300,” but reiterated, “American combat troops are not going to be fighting in Iraq again.” Air strikes, though, are not out of the question, and the U.S. “will be prepared to take targeted and precise military action if and when we determine that the situation on the ground requires it.”