40 more Hezbollah fighters killed in Syria, including a commander

A file photo of the funeral of a Hezbollah fighter killed in the Syrian war
Share: 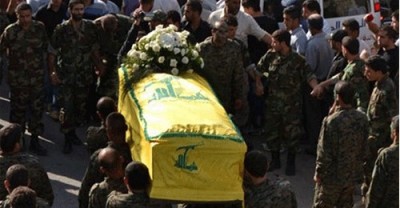 Forty Hezbollah fighters were killed Thursday in an ambush in the Syrian flashpoint town of Rankous, near the Lebanese border, according to a report by Lebanese news website NOW

A Free Syrian Army member who identified himself as Abu Omar Shatout reportedly told NOW that the ambush was carried out in farmland on the outskirts of the town.

The report added that a Hezbollah commander who was identified as Abu Abbas, who was responsible for coordination between the party’s troops and Iraqi Shiite militias operating in Syria, was one of the dead.

This development comes just five days after Twenty-nine Hezbollah fighters were reported killed in the the same town, during clashes with Syrian opposition forces.