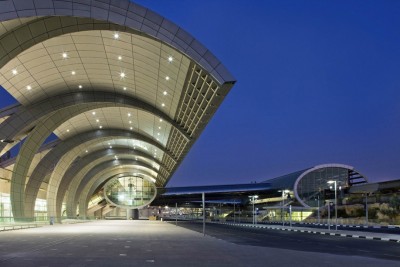 By Graham Boynton
Dubai International Airport has surpassed Heathrow as the world’s busiest global hub, while three Gulf airlines—Emirates, Qatar Airways, and Etihad—are scooping up passengers. Boarding a lavishly appointed Airbus A380 at Dubai’s $4.5 billion Terminal 3, Graham Boynton examines the tectonic shift in aviation that threatens to leave the West’s cramped, bare-bones carriers in the dust.

Two o’clock in the morning and I am standing at the crossroads of the modern world. Like a pinball machine, the arrivals-and-departures board clicks off the names of international cities—Dhaka, Colombo, Damascus, Male, Perth, Manchester, New York, Bangkok, Ho Chi Minh City—and wave after wave of citizens of the 21st century move this way and that through this massive marble-and-glass terminal.

One can’t help staring in wonder. Denim-clad construction workers from the Indian subcontinent are slumped over seats waiting for their flights to be called; Armani-draped businessmen carrying Gucci leather briefcases head for the first-class lounges; young, loving couples sleep entwined on the sofas that line the walkways. The final call for the Emirates flight to Jidda summons a posse of women in burkas, who scurry to the gate. Walking in strict formation in the opposite direction, behind a young man hoisting a yellow flag, is a group of neatly dressed, middle-aged Japanese women.

The only near-stationary beings in this enormous cavern of activity are the shoppers poring over items in 100 or so stores that run the length of the terminal, stacked with everything from the usual electronic gizmos and perfumes to $11,000 bottles of 1947 Cheval Blanc. (At Le Clos fine wines, the salesperson tells me she has already taken in $100,000—in a single sale—that evening.)

And so the well-oiled people-moving machine keeps turning, 10 gigantic elevators shifting travelers up and down the terminal’s 11 floors, a subterranean train shuttling them between concourses, 82 moving walkways. Perpetual motion, 24–7, 365 days a year.

This is Dubai International Airport’s $4.5 billion Terminal 3, the exclusive province of Emirates airline. Covering nearly 18.5 million square feet, it is the largest air terminal on the planet. Dubai International also ranks alongside Singapore’s Changi, Hong Kong International, and Beijing Capital International as the most passenger-friendly. Every week from this airport’s Jetways, 130 international airlines operate more than 6,000 flights to some 260 destinations on every continent except Antarctica.

In January 2013, Dubai International opened Concourse A—aviation’s first facility dedicated entirely to Airbus A380 superjumbos. Located in Terminal 3, it is a magnificent building. Huge first- and business-class lounges connect directly to the A380 upper decks; economy-class passengers board from the lower level. The new concourse has already increased Dubai’s traffic to 75 million passengers a year, moving it past London’s Heathrow as the world’s busiest international airport. By 2018 that number is expected to pass 90 million, overtaking vast domestic hubs such as Atlanta and Beijing.

And yet this is just the beginning. A few miles across the tiny emirate another enormous, five-runway airport is under construction. For now, Dubai World Central serves partly as a cargo airport. But late in the next decade Emirates airline plans to transfer its operations there. The result: by 2025 more than 220 million travelers will be passing through the city’s airports annually. For Dubai, world domination is literally on the horizon.

Now follow these passengers onto one of the Emirates Airbus A380s. Emirates, owned by the government of Dubai, is one of the world’s fastest-growing international airlines and is a game changer in global travel. Together with the two other nouveau Gulf carriers, Qatar Airways and Abu Dhabi’s Etihad, the national airline of the United Arab Emirates, it has already made the European and North American warhorses of aviation seem down-at-heel and out of date. There are many reasons for their unlikely emergence out of these arid desert communities—oil first and foremost. But beyond this, there is the allure of the voyage. A passenger’s trip through the airport inspires a measure of wonder. And the magic-carpet experience on one of these aircraft is rather like checking into a small luxury hotel on the wing.

I join the stream of travelers transferring from the concourse to a shining new aircraft, around 400 boarding on the lower level into economy class and some 90 on the upper floor to business and first. On both tiers the passengers are greeted by a phalanx of attractive young air hostesses recruited from all over the world. (Though Emirates employs male stewards, none is in evidence today.) The cabin announcements reveal that the crew on this flight can speak English, French, German, Arabic, Spanish, Swahili, Mandarin, Italian, and Xhosa.

Although this is not my first A380 flight, I am still somewhat awestruck at how this 550-ton aircraft, after an almost silent and apparently effortless surge of its four Engine Alliance GP7200 engines, seems to float into the air after what appears to be a rather sedate rumble down the runway. Previously, my most vivid aviation experience had been on the Concorde, which, by dramatic contrast, rocketed across the tarmac at breathtaking speed and tinnitus-inducing decibels and scythed its way into inner space with all the romantic, devil-may-care optimism that defined life in the booming late-20th century. But this is commercial air travel in the credit-crunch 21st, and the A380 is a high-tech piece of aerospace pragmatism. Carrying 525 passengers up to 8,500 nautical miles nonstop (the Dubai-New York leg takes about 13 1/2 hours), the plane hums along in relative quiet—with astounding eco-correctness. Airbus claims that the A380 uses 20 percent less fuel than the Boeing 747, and that when fully laden and flying long-haul it is more fuel-efficient per passenger than a Toyota Prius.

The A380 is not a particularly pretty aircraft by the Concorde’s aesthetically pleasing standards; some airline buffs say it looks as if one bus has been squashed on top of another. But the space inside—the interior volume—is very impressive. The first-class cabin comprises 14 suites that are equipped with sliding doors for complete privacy as well as a vanity table, personal mini-bar, wardrobe, desk, 23-inch television screen, and what is effectively an armchair that converts into a bed. And if you want to take a shower at 40,000 feet, there are two of those on board. The food-and-wine menu is also appropriately lavish, with caviar, Dom Pérignon, Cakebread chardonnay, and 1989 Gruaud-Larose all standard fare.

At the back of the upper-deck cabin, directly behind business class, is the pièce de résistance: a fully operative stand-up bar that has been the social hub on every Emirates A380 flight I have taken. To make space for this in-flight lounge, Emirates president Tim Clark says, he has had to sacrifice six premium seats, but declares, “It’s the most popular thing we’ve ever done. They have a real party down there.” On this flight a group of Italian contractors join two British couples around the bar soon after takeoff. And they’re all still there six hours later as the plane starts its descent. It is, indeed, some party.

Even the humble masses in coach are able to partake of the A380’s in-flight video-and-audio system, which offers more than 1,500 channels featuring movies, television shows, news, games, and music from around the world, all delivered through high-end, 13-inch seatback monitors.

For anyone who has endured the post-deregulation austerity of U.S. airlines over the past few decades—uncomfortable, overcrowded, bare-bones bus journeys in the sky—the experience of flying on Emirates, Etihad, or Qatar comes close to recapturing the joy of jet travel from Pan Am’s heyday. There is a sense of fun on board, and that has come down from the top. Tim Clark says he wants to bring a bit of glamour back into flying.

The sudden ascendancy of the Gulf airlines and their hub airports is partially a result of geological fortune but mainly due to good planning by the Emirati leaders. Emirates was founded in 1985 after Sheikh Mohammed Bin Rashid Al Maktoum hired a British Airways executive, Sir Maurice Flanagan, gave him $10 million, and told him to build an airline. (Many start-up aviation firms begin by leasing most of their fleet.) Aware that Dubai’s oil reserves would run out in the early 21st century, Sheikh Mohammed had decided to transform his country from a petro-dependent mini-state to a diverse business powerhouse with tourism and aviation at its center.

Today the airline has some 218 aircraft, with another 374 on order. What Flanagan and Clark, another exile from the British aviation industry, have created is an airline that links the emerging countries in Asia and Africa to Europe and the Americas. As Clark points out, the U.A.E. is within eight hours’ flying time for half the world’s population. And just as Emirates was connecting Africa and the East to the rest of the world, so Emirates was joined by Qatar Airways in 1997 and then by Etihad in 2003 in its bid to shuttle this new generation of business and leisure travelers around the globe.