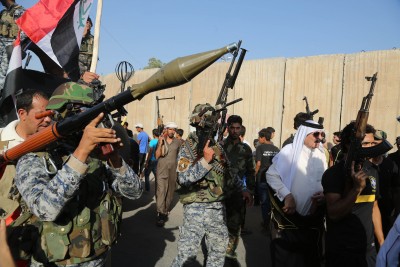 Shiite tribal fighters raise their weapons and chant slogans against the al-Qaida-inspired Islamic State of Iraq and the Levant (ISIL) in the northwest Baghdad’s Shula neighborhood, Iraq. (Karim Kadim/AP)
Share:

NO ONE one can say for sure how many men the Islamic State of Iraq and Syria (ISIS) killed in cold blood as it solidified its hold over northern Iraq last weekend. The insurgents boast of murdering 1,700; photographs they published suggest that ISIS machine-gunned at least several dozen people after forcing them to lie face-down in a ditch. Whatever its extent, the ISIS atrocity proves the organization’s nature in two respects: ISIS threatens human rights and human life; and it seeks to ignite an all-out sectarian war in Iraq between the Sunni Muslims it purports to represent and the Shiites who are aligned with Prime Minister Nouri al-Maliki in Baghdad — and who make up a majority of the massacred.

To some, this suggests an opportunity for wider U.S.-Iranian collaboration in support of Mr. Maliki, given that ISIS is the common enemy of Washington, Tehran and Baghdad. It’s a superficially appealing but dubious idea. The United States and Iran may be against ISIS, but, unlike Iran, the United States is not for Shiite hegemony over Iraq. Indeed, Mr. Maliki’s obdurate refusal to share power with Sunnis helped fuel the rebellion against him by ISIS and other Sunni extremists, which is why the Obama administration is “adamant that Prime Minister Maliki and his government must do a better job of reaching out to all of the representative entities in Iraq and bring them to the table,” as Secretary of State John F. Kerry reiterated Monday.

Perhaps Mr. Maliki would be content to see Iraq fragment into three parts: an Iranian-backed Shiite rump state, ruled by him, plus an ISIS-run caliphate and a Kurdish republic. Such an outcome would engender constant instability and violence and, as such, would be utterly incompatible with U.S. interests and values.

As Mr. Kerry noted, the just-completed elections in Iraq, which Mr. Maliki won but not overwhelmingly, created an opportunity to assemble a broader-based government — which is probably why ISIS chose this moment to launch its polarizing attack. “The question now,” Mr. Kerry added, is whether Baghdad, with well-calibrated U.S. help, can stop ISIS long enough to “give the government the opportunity to take stock of what it needs to do to present the people of Iraq with a comprehensive reform package and the confidence that there will be a different kind of governance.” It’s a long shot, but, as Mr. Kerry said, “the best way forward.”

Even at this late date, President Obama is right to press for a more inclusive Iraqi government, along with the country’s territorial integrity and sovereignty within existing borders. Achieving these goals in the middle of a war, while other powerful interests and emotions are tugging Iraq apart, will not be an easy task, to say the least. It will require a sustained interest in Iraqi affairs, as well as a clear and credible willingness to use force, without which U.S. diplomacy will lack impact. But either of the alternatives — a strategic alliance with Iran, or acceptance of a jihadist statelet stretching from Syria into Iraq — would threaten regional and U.S. security.