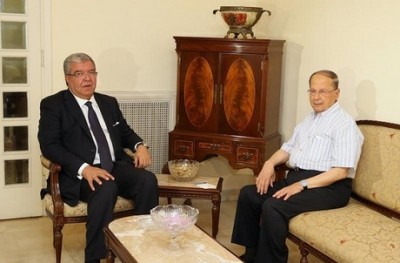 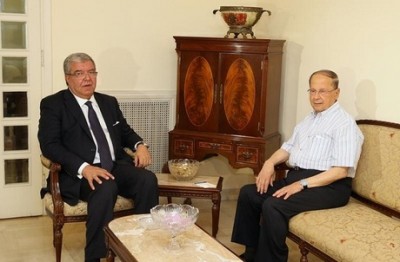 He stressed that that consultations and dialogue with Aoun are aimed at maintaining stability in the country.

“Dialogue is ongoing between us. It has so far achieved cabinet stability and facilitated the success of the security plan,” Mashnouq said after talks with Aoun

Mashnouq, a key member of the Future Movement stressed on the other hand that his bloc will not abandon the March 14 alliance and that Samir Geagea remains its only presidential candidate.”

“We will not abandon on our alliance with the March 14 coalition and (Lebanese Forces leader) Samir Geagea is still our (presidential) candidate.”

Mashnouq also denied reports claiming that he urged Prime Minister Tammam Salam to form a small-member cabinet. “The reports are unfounded, I only called for the formation of an emergency cell.”

Last week the Lebanese parliament failed for the sixth time in a row to hold a session to elect the country’s new president to replace Michel Suleiman whose terms ended on May 25.

Aoun has not announced his candidacy but he aspires to become a consensual nominee and has reportedly been waiting for former PM MP Saad Hariri to back him , but so far the Future Movement leader along with his March 14 allies is sticking with Geagea.