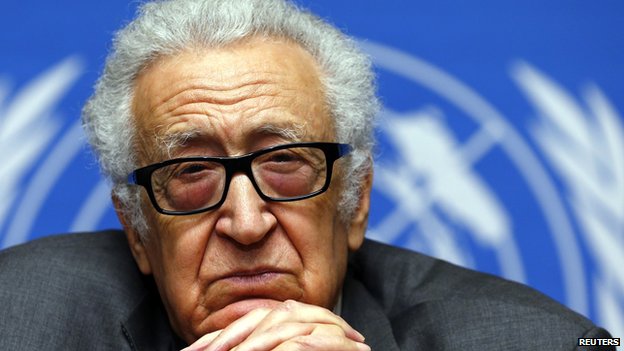 brahThe unrest sweeping Iraq is a direct result of the world’s indifference to the conflict in neighbouring Syria, former peace envoy Lakhdar Brahimi told AFP in an interview on Sunday.

Jihadist-led militants launched an offensive six days ago and swiftly advanced to within 80 kilometres (50 miles) of Baghdad’s city limits, bringing Iraq’s security forces to the brink of collapse.

Brahimi, who resigned in May as the UN-Arab League mediator for Syria, said the international community’s inaction on the conflict in Syria had precipitated the crisis in Iraq.

“It is a well known rule: a conflict of this kind (in Syria) cannot stay confined within the borders of one country,” Brahimi said.

The international community “unfortunately neglected the Syrian problem and did not help to resolve it. This is the result,” said Brahimi.

The Algerian statesman briefly served as UN special envoy for Iraq in 2004, following the US-led invasion that toppled the regime of dictator Saddam Hussein.

He stressed that he had told the UN Security Council in November that the Islamic State of Iraq and the Levant, the powerful jihadist group spearheading the offensive in Iraq, was “ten times more active in Iraq than in Syria”.

“The jihadists’ action in Iraq is taking place against a backdrop of a civil war between Shiites and Sunnis,” Brahimi said.

This meant Iraq’s minority Sunni Arab community was likely to “support the jihadists, not because they are jihadists but because my enemy’s enemy is my friend”.

Brahimi said Iraq “is like a deep wound that became infected” by the war in Syria.

“We have no right to be surprised because Iraq has never really recovered from the 2003 US invasion,” he said.

“In April 2004, I said in Baghdad that all the ingredients for a civil war were present… In fact a civil war started when Saddam’s regime fell. I am not defending Saddam, it was an odious regime, but the way it was done through an invasion had no justification.”

Sectarian division in Iraq runs very deep and Sunni Arabs have felt marginalised by the Shiite-dominated government since the overthrow of Saddam’s Baathist regime.

Brahimi added that Iran, a key ally of the government in Baghdad, had “its place” in the region, pointing to the “de facto cooperation between the United States and Iran” on the crisis in Iraq.

Responding to the crisis in Iraq, the Pentagon said on Saturday the United States had ordered an aircraft carrier, the USS George H.W. Bush, into the Gulf.

The deployment of the aircraft carrier was ordered by US Defence Secretary Chuck Hagel and comes amid calls for air strikes to blunt the insurgents’ lightning offensive that caught Iraq’s security forces on the hop, with many soldiers throwing away their uniforms and fleeing.

Iran warned on Sunday that “any foreign military intervention in Iraq” would only complicate the crisis.

Iraqi commanders have said security forces were now starting to push the militants back, and that soldiers had recaptured two towns north of Baghdad.

“Ideally, all countries in the region, including Iran, should sit together to say that we do not need a civil war between Sunnis and Shiites and that we must learn to live together,” Brahimi said.

He insisted that there could be no military solution to the conflict in Syria.

“The Syrian regime, which is making military gains, concluded that it will achieve a decisive victory,” Brahimi said.

“But I am not all certain that this is the case. Soon everyone will agree on seeking a political solution, which is the best for everyone.”