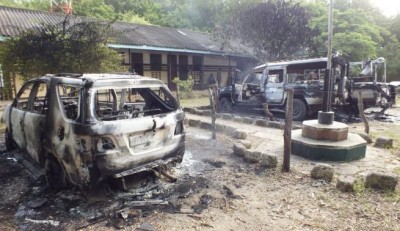 Wreckages of burnt cars are seen outside the Mpeketoni police station after unidentified gunmen attacked the coastal Kenyan town of Mpeketoni, June 16, 2014. REUTERS/Asuu Asuu
Share:
At least 50 people were killed when gunmen in two minibuses sped into a town on Kenya’s coast, shooting soccer fans watching a World Cup match in a television hall and targeting two hotels, a police post and a bank, officials and witnesses said on Monday. Police said Somalia’s al Shabaab Islamist group was most likely to blame for Sunday night’s assault on the town of Mpeketoni, which lies on the Indian Ocean coastline that runs north from Kenya’s main port of Mombasa to the Somali border.

Kenya’s interior minister referred to the attackers as “bandits” and there was no immediate claim of responsibility for the assault, the latest in a spate of gun and bomb attacks in recent months that have hurt the struggling tourist industry.

Kenya, which has blamed al Shabaab for previous attacks, had said it would be on alert during the World Cup to ensure public showings of matches were kept safe.

“The attackers were so many and were all armed with guns. They entered the video hall where we were watching a World Cup match and shot indiscriminately at us,” Meshack Kimani told Reuters by telephone. “They targeted only men but I was lucky. I escaped by hiding behind the door.”

The attack could heighten existing worries in other African nations such as Nigeria, which is battling the Boko Haram Islamist insurgency, that bars and other venues drawing crowds by hosting World Cup match screenings could become targets.

After Westgate, Al Shabaab warned of more attacks, saying they were determined to drive Kenyan troops out of Somalia. Kenya, whose soldiers are deployed as part of an African peacekeeping force battling militants, says it won’t pull out.

The gunmen raced into Mpeketoni in two minibuses, the kind used as public taxis in Kenya, and attacked their targets with guns and at least one explosive device. The government said they also raided the nearby settlement of Kibaoni.

Witnesses said there were about 30 gunmen. A police officer said all the victims were men with no women and children killed. “After they attacked the area, they went round the town in the vehicles shooting in the air and chanting slogans in the Somali language,” said 28-year-old Issah Birido, who survived the Mpeketoni attack by climbing a tree, hidden by the darkness.

He said two cousins were killed and their homes set on fire. Some 20 buildings were gutted and the charred wreckage of more than 20 vehicles littered the streets, witnesses said.

Kenya has a large number of citizens of Somali origin, so the fact that the attackers spoke Somali does not confirm an al Shabaab link. Tribes of Somali origin and other ethnic groups have in the past fought over land and other issues, though that has mostly occurred in Kenya’s lawless northern border area.

Kenya Red Cross regional director for the coastal area, Muiruri Kinyanjui, said the death toll was at least 50, but said it could rise because many residents were still unaccounted for, while others had suffered serious injuries.

Many people fled to nearby forests for safety.

Interior Minister Joseph Ole Lenku told a news conference the security forces would find the perpetrators, whom he called “bandits” and “criminals”, making no reference to al Shabaab.

In an apparent swipe at political opponents, he said the government was cautioning “political leaders … to desist from destructive politics and ethnic profiling that may be responsible for this heinous act”. He did not elaborate.

Police said no arrests had yet been made and said an investigation was underway to identify the perpetrators.

“Right now it is still premature to say who is behind the attack until investigations are done, but the initial suspicion is al Shabaab,” Mwenda Njoka, spokesman for Kenya’s internal security, told a Kenyan television channel.

Al Shabaab bombed crowds watching World Cup soccer matches on television in the Ugandan capital Kampala in 2010, killing 77 people. Uganda also has troops in Somalia. There were no immediate reports of foreign visitors being hurt in the attack on Mpeketoni, which is not a major holiday destination. But the assault could still further damage the tourist industry as it lies just 30 km (20 miles) from Lamu, a historic Arab trading port that is a popular attraction.

Kenyan hotels say bookings have dropped sharply because of recent attacks and warnings by Western governments about travel to Kenya. Some hotels on the coast say they face closure, while some hoteliers inland who offer safari trips say reservations are down by 30 percent or more.