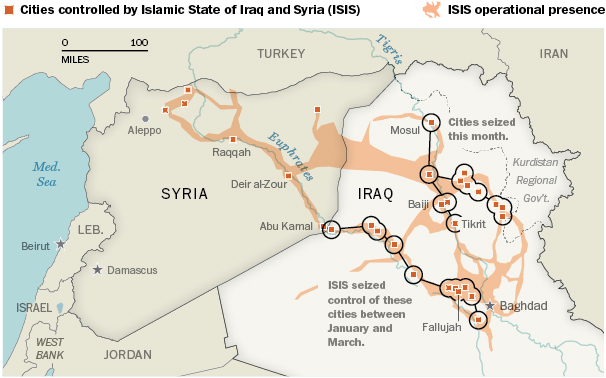 By: Fareed Zakaria
It is becoming increasingly likely that Iraq has reached a turning point. The forces hostile to the government have grown stronger, better equipped and more organized. And having now secured arms, ammunition and hundreds of millions of dollars in cash from their takeover of Mosul – Iraq’s second-largest city – they will build on these strengths. Inevitably, in Washington, the question has surfaced: Who lost Iraq?

Whenever America has asked this question – as it did with China in the 1950s or Vietnam in the 1970s – the most important point to remember is: the local rulers did. The Chinese nationalists and the South Vietnamese government were corrupt, inefficient and weak, unable to be inclusive and unwilling to fight with the dedication of their opponents. The same story is true of Iraq, only much more so. The first answer to the question is: Nouri al-Maliki lost Iraq.

The prime minister and his ruling party have behaved like thugs, excluding the Sunnis from power, using the army, police forces and militias to terrorize their opponents. The insurgency the Maliki government faces today was utterly predictable because, in fact, it happened before. From 2003 onward, Iraq faced a Sunni insurgency that was finally tamped down by Gen. David Petraeus, who said explicitly at the time that the core element of his strategy was political, bringing Sunni tribes and militias into the fold. The surge’s success, he often noted, bought time for a real power-sharing deal in Iraq that would bring the Sunnis into the structure of the government.

A senior official closely involved with Iraq in the Bush administration told me, “Not only did Maliki not try to do broad power-sharing, he reneged on all the deals that had been made, stopped paying the Sunni tribes and militias, and started persecuting key Sunni officials.” Among those targeted were the vice president of Iraq and its finance minister.

But how did Maliki come to be prime minister of Iraq? He was the product of a series of momentous decisions made by the Bush administration. Having invaded Iraq with a small force – what the expert Tom Ricks called “the worst war plan in American history” – the administration needed to find local allies. It quickly decided to destroy Iraq’s Sunni ruling establishment and empower the hard-line Shiite religious parties that had opposed Saddam Hussein. This meant that a structure of Sunni power that had been in the area for centuries collapsed. These moves – to disband the army, dismantle the bureaucracy, and purge Sunnis in general – might have been more consequential than the invasion itself.

If the Bush administration deserves a fair share of blame for “losing Iraq,” what about the Obama administration and its decision to withdraw American forces from the country by the end of 2011? I would have preferred to see a small American force in Iraq to try to prevent the country’s collapse. But let’s remember why this force is not there. Prime Minister Maliki refused to provide the guarantees that every other country in the world that hosts U.S. forces offers.

Washington is debating whether airstrikes or training forces would be more effective, but its real problem is much larger and is a decade in the making. In Iraq, it is defending the indefensible. ■

Fareed Zakaria is a columnist for the Washington Post