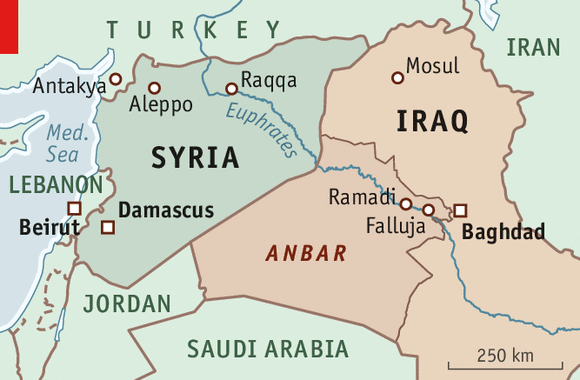 Working in secret, European diplomats drew up the borders that have defined the Middle East’s nations for nearly a century — but now civil war, sectarian bloodshed and leadership failures threaten to rip that map apart.

In the decades since independence, Arab governments have held these constructs together, in part by imposing an autocratic hand, despite the sometimes combustible mix of peoples within their borders. But recent history — particularly the three years of Arab Spring turmoil, has unleashed old allegiances and hatreds that run deep and cross borders. The animosity between Shiites and Sunnis, the rival branches of Islam, may be deepest of all.

The unrest is redefining Syria, Iraq, Lebanon and Libya — nations born after the fall of the Ottoman Empire. Already quasi-states are forming.

For the al-Qaida breakaway group that overran parts of Iraq this week, the border between that country and Syria, where it is also fighting, may as well not even be there. The group, known as the Islamic State of Iraq and the Levant, wants to establish a Shariah-ruled mini-state bridging both countries, in effect uniting a Sunni heartland across the center of the Mideast.

Other potential de facto states are easy to see on the horizon. A Kurdish one in northern Iraq — and perhaps another in northeast Syria. A rump Syrian state based around Damascus, neighboring cities and the Mediterranean coast, the heartland of President Bashar Assad’s minority Alawite sect. A Shiite-dominated Iraq truncated to Baghdad and points south.

Fawaz Gerges, a professor at the London School of Economics, sees an ongoing, violent process to reshape government systems that have been unable to address sectarian and ethnic differences and provide for their publics.

“The current order is in tatters,” he said. “More and more and more people are coming to realize that the system as it is organized, as it is structured, is imploding.”

The new frontiers, backed solely by force of arms, may never be formally recognized — it’s not easy to actually create a new country — but given the weakness of central authority that may not make much of a difference.

The Islamic State’s campaign is helped by Sunni discontent with Assad’s Alawite-dominated Syrian government and the Shiite-led government in Iraq, two states whose borders were drawn by Britain and France after World War I.

The militants’ capture of Iraq’s cities of Mosul and Tikrit makes their dream of a new Islamic state look more realistic. It already controlled a swath of eastern Syria along the Euphrates River, with a spottier presence extending further west nearly to Aleppo, Syria’s largest city. In Raqqa, the biggest city it holds in Syria, it imposes taxes, rebuilds bridges and enforces the law — its strict version of Shariah.

Historically, Raqqa and Mosul and the surrounding areas that make up Northern Mesopotamia — a region known as the Jazira — have had more in common with each other than they did with distant Southern Mesopotamia centered on Baghdad and Basra. The desert wadi routes that the Islamic State uses to smuggle its weapons, fighters and money back and forth across the border are the same trade routes established five millennia ago when the first cities arose in the Upper Tigris and Euphrates valleys.

And the Islamic State is not the only group with ambitions.

Iraq’s Kurds, who run an autonomous region in northern Iraq, seized control of the city of Kirkuk, ostensibly to defend it from the militant group’s advance. But they may not want to leave. The ethnically mixed city historically holds a revered status among Kurds and they claim it as their own. Holding it will only further stoke the longtime hopes among many Kurds of declaring outright independence.

Syria’s Kurds, meanwhile, have taken advantage of the turmoil of that country’s civil war — now in its fourth year — to take control of the pocket of northeast Syria where they predominate.

In North Africa, Libya is grappling with its own centripetal forces since the 2011 fall of Moammar Gadhafi. The authority of the central government in Tripoli has collapsed as multiple local militias take power in cities and regions around the country. In the eastern half of Libya — historically a distinct entity centered around Benghazi — there are calls for autonomy.

The contours and regimes of the Mideast are rooted in the 1916 Sykes-Picot accord, named after the two British and French diplomats, Mark Sykes and Francois Picot, who negotiated it in complete secrecy.

Under the deal, London and Paris carved up Ottoman Empire’s Middle Eastern lands into spheres of influence. A series of later treaties after the end of World War I set the final boundaries, eventually creating Lebanon, Syria, Iraq, Jordan and a British mandate in Palestine that paved the way for the creation of Israel. The lines were drawn according to British and French interests with little regard to realities on the ground.

For example, mainly Sunni Mosul — along with Kurdish areas further north — was thrown together with Baghdad and the overwhelmingly Shiite south to form Iraq.

Syria was cobbled together from what had been the Ottoman provinces of Aleppo and Damascus, along with the long-separate coastal areas dominated by Alawites, an offshoot of Shia Islam.

Lebanon was broken away as a French-protected Christian protectorate, and Sunni and Shiite Muslim areas were added, creating a sectarian mix that has erupted into civil war and constant turmoil.

Cities like Acre, Haifa, Nazareth — which by administration, trade and clan were long connected to areas now in Lebanon and Syria — were instead looped into Mandate Palestine and now are in Israel.

Perhaps the most artificial creation was Jordan. An old joke has it that a strange zigzag in Jordan’s border with Saudi Arabia was the result of a tipsy Winston Churchill hiccupping as he drew the line on the map. Its main population centers like Amman had historically been a hinterland for Syria and Palestine, but they were broken off and handed stretches of desert to the east and south to form a new entity under a king installed by Britain.

Ironically, for all its arbitrariness, Jordan looks at the moment like the most stable of the post-World War I creations.

Despite the foreign-drawn lines, the countries that resulted were relatively stable for the next century. In part, that’s due to the grip of autocratic regimes. But also, people developed true identities as Jordanians, Iraqis, Lebanese or Syrians — even if at the same time they considered the borders illegitimate colonial creations. 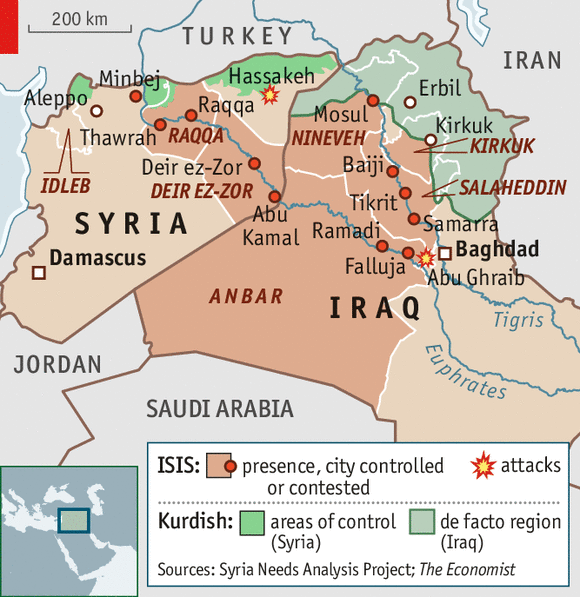 That makes the sense of nationhood more durable than it looks.

Take Lebanon, for example. During its 1975-1990 civil war, some predicted it would break up into Christian, Sunni or Shiite mini-states, but it never happened. Syria dominated it for years, and Hezbollah still bridges both countries, making the border hazy. Yet, “odd and dysfunctional as it is, it still is a border that is real and meaningful,” said Paul Salem, vice president of the Washington-based Middle East Institute.

World powers have no desire to see borders rearranged. The United States and Turkey would both sharply oppose any Kurdish declaration of independence in Iraq, for example, Salem said.

But informal and de facto enclaves are entirely possible. The lines being drawn by Islamic State fighters are “unrecognized but real,” he said. “Taxes are levied, an armed force is in control, there’s just no formalization.”

Gerges said the dissatisfaction over the current order is generating debate over what the new Mideast should look like.

For the Islamic State and other extremists, there should be a caliphate — a ruler implementing Islamic law. Others want the Levant unified as it was under the Ottomans, but under Arab rule. Others dream of something resembling the European Union, he said.

Creating federalist systems in the existing states has been touted as a cure. Effectively, it’s controlled decentralization: Give ethnically or religiously distinct regions enough autonomy to meet yearnings for self-identity while still being part of a cohesive state.

The Americans infused that idea into Iraq’s post Saddam Hussein constitution, and some have called for it in Libya as well.

But there is also resistance among governments and some in the public who fear “federalism” is a code word for dismembering their country.