File photo of a Hezbollah funeral . Many Hezbollah fighters have reportedly been killed in Syria in defense of Syrian dictator Bashar al Assad , but the party has not revealed any official figures
Share: 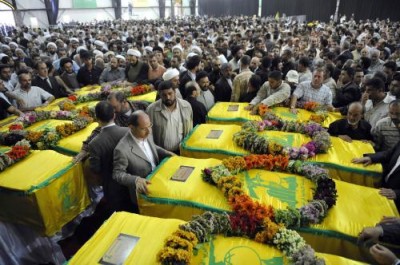 Twenty-nine fighters of the Iranian backed Shiite Hezbollah militant group have been killed in Syria’s Rankous in the last two days, during clashes with the Free Syrian Army ( FSA) , FSA Commander Abu Omar Alloush was quoted as saying by NOW news website.

Alloush also denied “claims” made by Hezbollah officials that extremist Islamists were fighting Hezbollah and regime troops in Rankous.

“We assure [you] that what is happening in Rankous is an uprising led by the town’s residents against Hezbollah and the Baathist army, as a result of their humiliation and hunger,” he was quoted as saying.