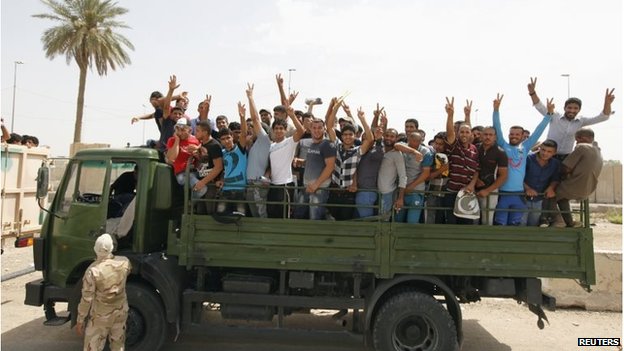 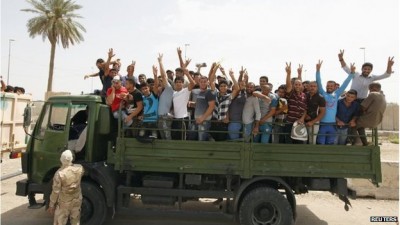 Volunteers flocked to protect the Iraqi capital on Friday from militants inspired by al-Qaeda, as the country’s top Shiite religious leaders issued a call to arms in the face of the insurgents’ rapid advances and the crumbling of Iraqi security forces.

With heavily armed fighters from the Islamic State of Iraq and Syria (ISIS) seizing more territory overnight in a rampage that threatens to tear the country apart, U.S. Secretary of State John F. Kerry said President Obama would act soon to address the surge of violence.

“Given the gravity of the situation, I would anticipate timely decisions from the president,” Kerry told reporters after an international conference in London. “This needs to be a wake-up call for all of Iraq’s political leaders,” he said, adding: “I am confident that the United States will move rapidly and effectively.”

Iraqi officials said tens of thousands of volunteers had answered a call to join security forces and repel advances by ISIS fighters, as the group seized the towns of Saadiyah and Jalawla north of the capital.

Shiite religious leaders, including Iraq’s top Shiite cleric, used Friday prayers to call on the faithful to take up arms against the radical Sunni Muslim insurgents. In the Shiite holy city of Karbala, a representative of Grand Ayatollah Ali Sistani urged anyone who can carry a weapon to “defend the country, the citizens and the holy sites.”

Iraqi state television showed the new unpaid volunteers scrambling to get on packed army trucks at recruitment centers after a call from the Shiite-led government. The mobilization of the irregular forces, as well as Iraq’s notorious Shiite militias, to battle the ISIS insurgents threatened to plunge Iraq into large-scale sectarian bloodletting. The volunteers also appeared to be mostly Shiites.

More than 30,000 people had signed up to defend Baghdad by Friday, said an Iraqi official who declined to be named because he is not authorized to provide the figures.

“There are no salaries,” he said. “It shows just how keen people are to fight this.” The use of civilian conscripts is part of what officials have described as a new strategy to protect Baghdad.

Troops battled ISIS militants Friday in Diyala province, a theater of some of the worst sectarian fighting during the civil strife that followed the 2003 U.S. invasion of Iraq.

The fresh fighting came a day after the al-Qaeda offshoot asserted its authority over Sunni areas in the north and Kurds seized control of the city of Kirkuk.

The discredited Iraqi army scrambled to recover after a humiliating rout in the north this week, dispatching elite troops to confront the militants in the central town of Samarra and claiming that it had recaptured Tikrit, the home town of the late Iraqi strongman Saddam Hussein, whose regime was toppled by U.S. troops sweeping north from Kuwait 11 years ago.

But there was no sign that the militant push was being reversed. With the ISIS fighters now sweeping south toward Baghdad, scattering U.S.-trained security forces, the achievements of America’s eight-year war in Iraq were rapidly being undone. Iraq now seems to be inexorably if unintentionally breaking apart — into Shiite, Sunni and Kurdish enclaves that amount to a de facto partition of the country.

As the scale of the threat to the collapsing Iraqi state became clear, Obama administration officials met to discuss options for a response, including possible airstrikes. An Iraqi official close to the office of Prime Minister Nouri al-Maliki said the United States had committed to carrying out airstrikes against the militants, but U.S. officials said no decision had been reached. 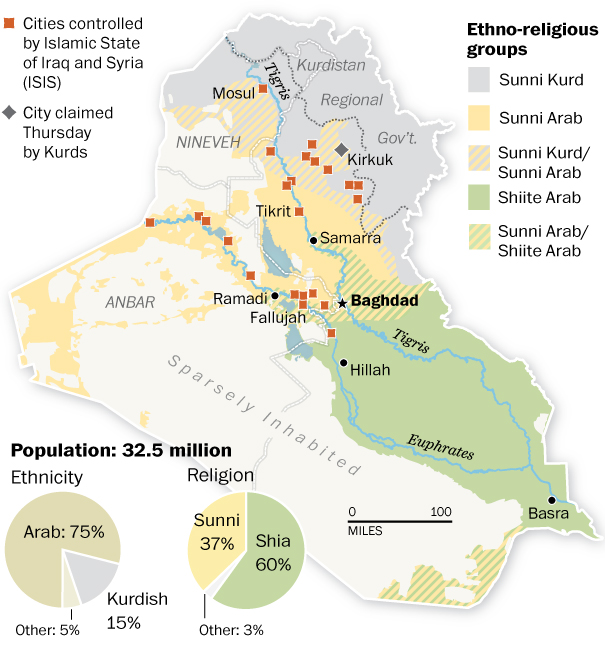