Lebanon: Like everything else World Cup is mixed up with politics 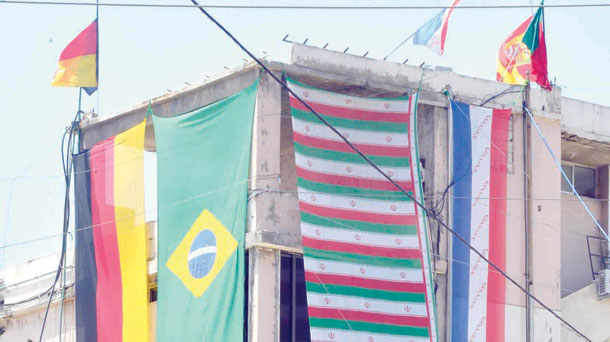 The Iranian flag competes for space with the flags of other FIFA World Cup 2014 contenders in southern Beirut. (Asharq Al-Awsat)
Share:
Like the rest of the world, Lebanon is gearing up for this year’s FIFA World Cup, and they’re raising the flags of each of the 32 participating nations to show their support. Judging from the number of flags displayed in restaurants and cafes, on cars and draped over balconies, you might think Lebanon was playing in the tournament, or indeed hosting it.

Judging from a quick walk around southern Beirut, the Brazilian, German and Italian teams are clear perennial favorites. The big difference this year, however, is the number of Iranian flags hung side-by-side with Western ones in districts with many Hezbollah supporters—especially considering that Iran qualified for the World Cup with a stunning 4–0 victory over Lebanon.

It’s not unusual for the FIFA World Cup to become mixed up with politics, and in Lebanon sharp political divisions have invaded almost all walks of life. Last week, for example, a basketball match in Beirut turned into a new round of sectarian violence. Now, many residents of southern Beirut are showing their support for the Iranian World Cup team, since Iran is a key backer of Hezbollah.

Those who are supporting Iran say it’s a matter of principle—not a personal preference for the Iranian side’s performance on the pitch.

“We sought to show our support to the Iranian team in our own way, by placing the Iranian flag side-by-side with the flag of the nation each of us favor. For us, supporting Iran is unquestionable,” Hussein F., a resident of southern Beirut who didn’t want to give his surname, told Asharq Al-Awsat as he sat in one of the area’s many cafes.

Ali Al-Shami, another Iran supporter who lives in southern Beirut, said: “It is our duty to support Iran, because this is the only way in which we can back the country that has assisted us on all levels. I’m not sure they will win, but I’m hopeful they will qualify for the second round.”

He added: “If the Iranian team loses the competition, God forbid, I’m sure that my friends, especially those who antagonize Iran politically, will tease me. I’m not good at being sportsmanlike, so our friendships could be wrecked as a result.”

Fatima Awad justifies her support for the Iranian team because, as she says, “it is the only Muslim team in this World Cup.” Saying she is “proud” to adorn her car with the Iranian flag, she adds that she previously supported Tunisia the last time it appeared in the competition, in 2006.

Many of the Iranian side’s supporters in Lebanon believe that supporting Iran is the “obvious” choice. Another Beirut resident, Mostafa Salhab, said: “Sports are no different from politics. If Iran left the World Cup, only then I would support the German team. That’s why I’m hanging the Iranian and German flags from my balcony.”

But, asked what he would do if Iran ended up playing Germany, Mostafa said: “I wouldn’t find it confusing. Like I said, Iran is my second home.”

But Ahmed Al-Ahmed was somewhat more skeptical when he said that “the goal of raising the Iranian flag is provocation, rather than support. The motif has a political background and has nothing to do with sport.” He expected that “bullets and fireworks will be fired after each win for Iran—not out of any love for Iranian football, but out of love for the Iranian resistance and the Iranian state’s policies.”