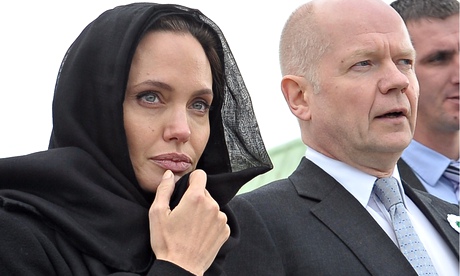 Up to 1,200 government ministers, military and judicial officials and activists from up to 150 nations are attending the June 10-13 summit that is the result of a two-year partnership between Jolie and Hague to combat rape as a weapon of war.

The summit follows a series of violent incidents against women that was expected to raise pressure for action, including the kidnap of 200 Nigerian schoolgirls, the stoning of a pregnant Pakistani woman to death, and the gang-rape and murder of two Indian girls.

Opening the four-day summit in London’s docklands, Jolie, special envoy of the UN High Commissioner for Refugees (UNHCR), said political will was needed globally to treat sexual violence as a priority and tackle a culture of impunity.

“It is a myth that rape is an inevitable part of conflict. It is a weapon of war aimed at civilians .. done to torture and humiliate people and often to very young children,” she said.

“We need to see real commitment and go after the worst perpetrators, to fund proper protection for vulnerable people, and to step in to help the worst-affected countries.”

Jolie’s involvement in humanitarian issues dates back to 2001 when she travelled to Sierra Leone as a UNHCR Goodwill Ambassador and saw the impact of years of civil war when an estimated 60,000 women were raped.

Her link-up with Hague was sparked by her 2011 directorial debut “In the Land of Blood and Honey” that was set against the backdrop of the 1992-95 Bosnian war in which more than 100,000 people were killed and an estimated 20,000 women believed raped.

Last year the unusual partnership led to the launch of a declaration, now signed by about 150 countries, pledging to end impunity and provide justice and safety for victims but Hague said the summit would take this further.

Hague said the conference, to be attended by U.S. Secretary of State John Kerry, would agree a protocol to push for international standards on recording and investigating sex crimes to bring more people to justice.

Other practical steps would include strengthening laws in certain countries, training armies and peacekeepers, and increasing funding to help survivors, some of whose harrowing stories were retold in documentaries on show at a fringe event.

“There is power in numbers and if we unite behind this cause we can create an unstoppable momentum and consign this vile abuse to history,” Hague said, unveiling a six million pound ($10 million) fund for victims from the UK government.

Organisations with stands at the meeting and members of the public attending the fringe event of theatre and discussions said concrete action was critical and that the public and activists needed to ensure governments stuck to promises made.

“The momentum is with this summit, with Angelina Jolie and Hague and the news agenda – now is the perfect time for action on women’s rights. This could be a turning point,” said Nick Harvey, spokesman for healthcare charity Doctors Of The World.

Canadian lawyer Guylaine Grenier, on holiday in London with her niece from Vancouver, said this should be just the start.

“I hope it does not end here, that it goes further. This kind of event should happen every year so we can see what has really happened in the past year,” Grenier, 45, told Reuters.