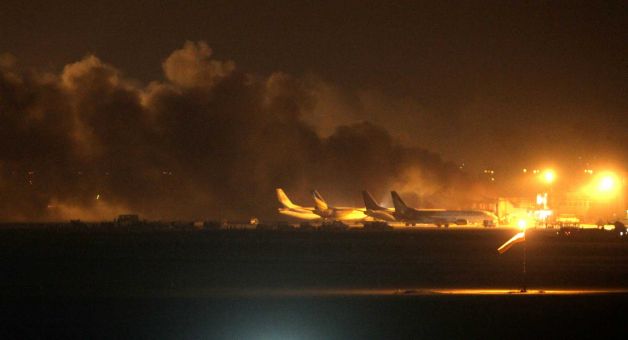 Fire illuminates the sky above the Jinnah International Airport in Karachi where security forces are fighting with attackers Sunday night, June 8, 2014, in Pakistan. Gunmen disguised as police guards attacked a terminal with machine guns and a rocket launcher during a five-hour siege that killed 13 people as explosions echoed into the night, while security forces retaliated and killed all the attackers, officials said Monday. Photo: Fareed Khan, AP
Share:
The Pakistani Taliban claimed responsibility Monday for a ferocious overnight assault in Karachi that stretched into the morning in which gunmen infiltrated Pakistan’s largest international airport and waged an extended firefight against security forces that resulted in 29 deaths and shook the country’s already fragile sense of security.

The attack “was a response to the recent attacks by the government,” Shahidullah Shahid, a spokesman for the Taliban, said by telephone. “We will continue carrying out such attacks.” He insisted, however, that the group was seeking to resuscitate peace talks with the government.

Explosions and gunfire rang out across the airport through the night as the police and security forces battled with the attackers while passengers waited anxiously in a nearby terminal and in airplanes stranded on the tarmac. Just before 5 a.m., after five hours of siege, the military reported that the last of 10 attackers had been killed.

The chief minister of Sindh Province, Syed Qaim Ali Shah, told reporters that in addition to the 10 attackers, 19 other people had died, including 11 members of the Airport Security Force, five local airline officials and three others. “They were well trained,” he said of the assailants. “Their plan was very well thought out.”

Maj. Gen. Rizwan Akhtar, the director general of a paramilitary force that is deployed in Karachi, told reporters that the attackers appeared to be of Uzbek origin. General Akhtar said the attackers came in two groups of five each. Three attackers killed themselves by detonating their suicide jackets, while seven were killed by security forces, he said.

The assault was the most ambitious of its kind in Pakistan since Islamist militants attacked a navy air base in central Karachi in 2011. Although elite commandos moved quickly to counter the assault, many Pakistanis expressed shock that militants could penetrate such a prominent target so thoroughly and raised questions about why the attack had not been prevented by the military’s powerful spy service, the Directorate of Inter-Services Intelligence.

The attack began late Sunday, when the gunmen made it past security checkpoints near the airport’s old terminal, which is mostly used for cargo or private flights for senior government officials and business leaders. Some news reports said the men wore identification saying they were members of the Airport Security Force.

Hurling grenades and unleashing automatic weapons fire, the attackers at least initially moved toward the nearby web of runways as they fought, according to news and witness reports.

News images showed a major fire blazing in the airport complex that filled the night sky with an orange glow and appeared to be near parked jets. But a senior spokesman for the Pakistani military, Maj. Gen. Asim Bajwa, denied news reports that two planes had caught fire. He also denied reports that the gunmen had been trying to hijack an airliner.

All flights to Karachi were diverted to other airports. Television pictures showed ambulances racing from the airport, which is named after Pakistan’s founder, Muhammad Ali Jinnah, ferrying casualties to the hospital.

Although the fighting took place away from the main terminal used by commercial airlines, some passengers were stranded on airplanes that had been about to take off when the assault started.

At one point, Syed Saim A. Rizvi, a Twitter user who said he was on a flight, reported that commandos from the army’s elite Special Services Group had taken control of his plane. Moments later, he reported a “huge blast” and heavy firing outside and a “full panic” on board.

Two hours later, he said that the Pakistani military had safely evacuated all passengers from the plane.

A spokeswoman at Jinnah Hospital in Karachi, Dr. Seemi Jamali, said that in addition to the dead, at least 16 people had been seriously injured.

A senior officer with the Rangers, the paramilitary force that helps secure the airport, told reporters that the attackers had been carrying Indian weapons, in an apparent suggestion of Indian involvement that was greeted with widespread derision on social media.

A tentative peace process with the Taliban, begun by Prime Minister Nawaz Sharif’s government in February, has disintegrated in recent weeks. The militant group has split into at least two factions, in part over disagreements about whether to negotiate with the government. The Pakistani Army renewed a campaign of airstrikes against the militants in North Waziristan two weeks ago, and factions of the Taliban were believed to be behind a deadly attack on a high-security military complex near Rawalpindi last week.

Karachi, a city that was long a haven for militant fighters, financiers and sleeper cells, has in recent years become increasingly contested by the Taliban and other militants. Many have moved in from the country’s northwestern tribal regions and have become embroiled in the violent political turf battles that have racked the city.

The situation is further complicated by political uncertainty. Last week, Karachi was shut down for three days after the British police arrested Altaf Hussain, the leader of the city’s biggest political party who lives in London, on suspicion of money laundering. Mr. Hussain was released on Saturday but remains under investigation.

In a further demonstration of the brittle security situation across Pakistan, at least 23 Shiites were reported killed on Sunday in a coordinated suicide bombing in a remote part of Baluchistan Province, on the border with Iran. The Associated Press quoted provincial officials as saying that the Shiites were attacked while returning from a pilgrimage to Iran.

Although the Taliban have frequently been behind attacks on Shiites and other religious and ethnic minorities in Pakistan, such violence in Baluchistan has more often been waged by other sectarian militias like Lashkar-e-Jhangvi. Human rights officials have accused Pakistan’s military of aiding or turning a blind eye toward those groups, as they are considered its allies in a long war against Baluch separatists.

The attack on the Karachi airport on Sunday was the most audacious militant strike in the city since the coordinated attack against the Mehran naval base in May 2011. At least 10 members of the security forces were killed in the attack, which also destroyed two surveillance planes provided to Pakistan by the United States and deeply embarrassed the country’s military.

In December 2012, Taliban militants struck the airport in Peshawar, the main city in Pakistan’s northwest, killing seven people. That attack was suspected of being aimed at a military facility inside the airport’s boundaries.

General Bajwa, the army spokesman, said that a search and sweep operation at the airport had been completed and that it was to be handed over to the civilian authorities by Monday afternoon.