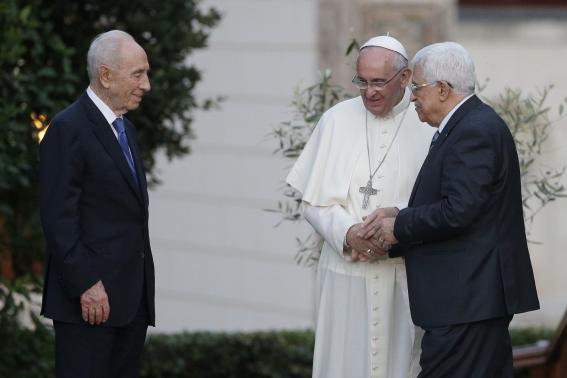 Pope Francis told Israeli and Palestinian leaders they “must respond” to their people’s yearning for peace “undaunted in dialogue” during an unprecedented prayer meeting among Jews, Christians and Muslims at the Vatican on Sunday.

The pope made his vibrant appeal to Israeli President Shimon Peres and his Palestinian counterpart Mahmoud Abbas at the end of a two-hour evening service in the Vatican gardens, an encounter he hopes will relaunch the Middle East peace process.

“Peacemaking calls for courage, much more so than warfare. It calls for the courage to say yes to encounter and no to conflict; yes to dialogue and no to violence; yes to negotiations and no to hostilities,” he said.

The pope spoke after Jewish rabbis, Christian cardinals and Muslim Imams read and chanted from the Old Testament, the New Testament and the Koran in Italian, English, Hebrew and Arabic in the first such inter-religious event in the Vatican.

At times the chanting made it seem that participants were in a synagogue or outside a mosque in the Middle East rather than a primly manicured triangular lawn, a spot the Vatican chose as a “neutral” site with no religious symbols.

In his strong speech in Italian, Francis called for respect for agreements and rejection of acts of provocation. “All of this takes courage, it takes strength and tenacity,” he said.

Francis, who made the surprise invitation to the two leaders during his trip to the Holy Land last month, said that the search for peace was “an act of supreme responsibility before our consciences and before our peoples” and noted that millions around the world of all faiths were praying with them for peace.

“We have heard a summons and we must respond. It is the summons to break the spiral of hatred and violence, and to break it by one word alone: the word ‘brother’,” the pope said as Peres and Abbas listened intently and read the live translations.

He said the children who have been the innocent victims of wars and conflicts made the search for peace an imperative. “The memory of these children instils in us the courage of peace, the strength to persevere undaunted in dialogue,” Francis said.

It was the first public meeting between the two presidents in more than a year and took place more than a month after United States-led peace talks collapsed amid bitter mutual recrimination.

Peres, who is 90 years old and whose mandate expires next month, departed from his prepared speech in English and Hebrew to say that he was an old man who had “seen war” and “tasted peace” and that all leaders owed their children a better future.

Abbas prayed to God “to bring comprehensive and just peace to our country and region so that our people and the peoples of the Middle East and the whole world would enjoy the fruit of peace, stability and coexistence”.

The pope, the two presidents and Patriarch Bartholomew then planted an olive tree and members of each delegation shook hands as music played. The four later held private talks for about 20 minutes before the two presidents left the Vatican.

The Vatican has played down any expectations that the meeting – billed as a “pause from politics” – will lead to any immediate breakthroughs in efforts to solve the region’s tortuous problems and says it is not meddling in regional issues and does not want to get involved in details of negotiations.

Israeli Prime Minister Benjamin Netanyahu, the key Israeli decision-maker, is not attending and he refuses to deal with the Palestinian unity government, backed by Hamas Islamists, that Abbas swore in last Monday.

Netanyahu has made no direct comment on the meeting, but in remarks on Sunday at a paramilitary police base in Jerusalem he suggested that prayer is no substitute for security.

“For thousands of years, the people of Israel have been praying for peace daily. But until peace comes, we will continue to strengthen you so that you can continue to defend the State of Israel. Ultimately, that is what will guarantee our future and will also bring peace,” he told the troops.

But the fact that Francis’s bold move has managed to bring together the two presidents at all shows his desire to engage political leaders, offering inter-religious dialogue as a building block.