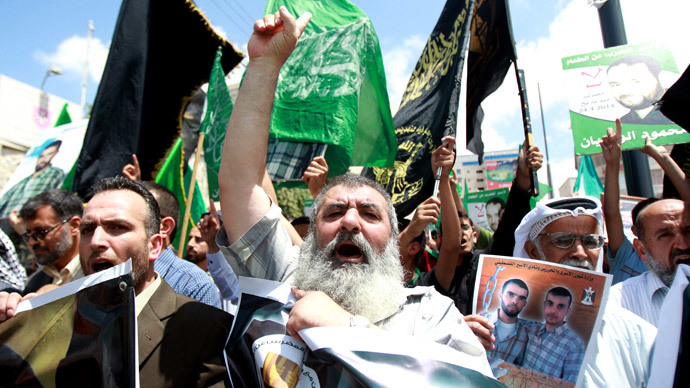 Palestinian men take part in a demonstration in the West Bank town of Bethlehem on June 6, 2014 in solidarity with Palestinian prisoners on hunger strike in Israeli jails. (AFP Photo/ Musa Al-Shaer)
Share:
Israel’s Cabinet has approved a bill that could complicate future Palestinian prisoner releases.

The bill approved Sunday would allow Israeli courts to block the pardon of prisoners convicted of murder. Critics say that will limit Israel’s room to maneuver in negotiations.

Prisoner releases have been central to Israel’s negotiations with the Palestinians and the Lebanese Shiite militant group Hezbollah.

During a recent round of negotiations, Israel released dozens of Palestinian prisoners who had been convicted in deadly attacks. The talks collapsed after Israel failed to release a final batch of prisoners. Israel also has exchanged prisoners for captive soldiers.

The bill still needs to be approved by parliament.

Israel holds some 5,000 Palestinians prisoners. Their fate is a deeply emotional issue in Palestinian society. Palestinians view them as freedom fighters.