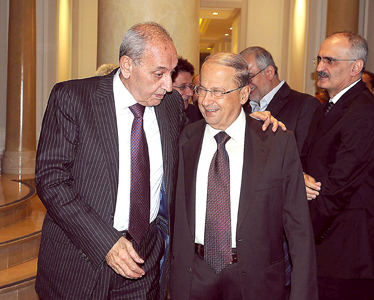 Change and Reform bloc leader MP Michel Aoun predicted on Wednesday following a meeting with Speaker Nabih Berri at his residence in Ain el Tinah that the boycott of the parliament in the absence of a president would be resolved soon.

“Our talks touched on key issues that require mutual understanding; including the election of a president, the work of the cabinet, and the work of the parliament,” Aoun said at a press conference following the meeting.

“Our participation in the parliament’s sessions is being studied, and we will not announce any step before discussing it with our allies.”

Aoun’s comments come after Berri slammed his allies for boycotting the parliamentary sessions.

Berri issued a stern warning against the MPs who are boycotting parliamentary sessions, saying he would take measures against them for “cherry picking from the menu the food they like.”

Berri accused his allies of being “worse than farm owners.”

The majority of March 8 alliance MPs including Aoun’s bloc and Hezbollah have been boycotting the parliamentary sessions aimed at electing a new president resulting in lack of quorum and the failure to choose a head of state.

Aoun added: “We discussed all available solutions with Speaker Berri , and it is certain that next week will provide a solution.”

Former President Michel Suleiman ‘s term ended on on May 25 leaving a void that has halted parliament sessions and raised questions over the role of the cabinet.