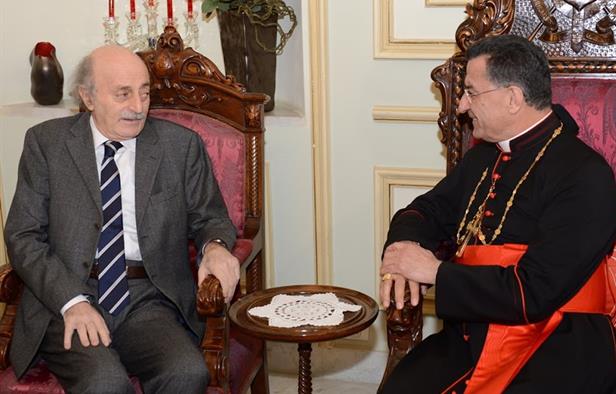 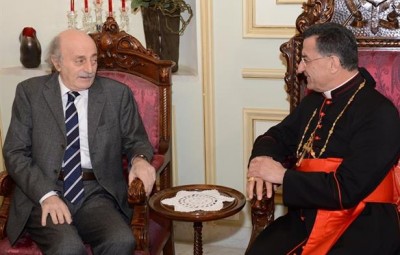 Progressive Socialist Party leader MP Walid Jumblatt defended on Monday Maronite Patriarch Beshara al-Rai’s recent trip to the Holy Land branding it as a bold and brave stand and questioning the fuss created over it and the failure of the majority of the parties to defend him.

In his weekly editorial in the PSP-affiliated al-Anbaa website Jumblatt wrote: “Al-Rai’s trip was inevitable given the negative repercussions the security and political developments in Palestine, Syria, and Iraq are having on the region’s Christian population.”

“The patriarch made very bold and brave stands in this regard,” he stressed and added:

“The trip emphasized the need for the people to remain attached to their homeland regardless of the hardships they are facing”.

“His visit gave Palestine’s Christians and Arabs a glimmer of hope during the critical time they are enduring. He also succeeded in avoiding Israel’s exploitation of the trip,” Jumblatt added stressing that the trip was strictly pastoral and religious .

Jumblatt’s comment appeared to be in response to Hezbollah MP Ali al-Moqdad’s criticism of Rai’s trip and his call for reconciliation with Lebanese who fled to Israel.

“Some people went to occupied Palestine to convince some agents who withdrew with the enemy’s army in May 2000 to return to Lebanon,” Moqdad said Saturday in criticizing Rai’s meeting with the Lebanese exiled to Israel.

The PSP chief questioned the criticism directed against Rai for meeting several members of the South Lebanon Army during his visit, saying: “It should be noted that those members come from all religions and sects.”

“The families and children of the so-called agents were forced by the Israeli occupation to cooperate in one way or the other with the enemy, so they should not be labeled as such,” Jumblatt said.

“The boycott of visits to Palestine over the decades has cleared the way for Israeli practices that have displaced the Palestinian people, created an artificial entity, and eventually led to the current reality due to the Arab defeats over the years,” Jumblatt stressed.

“The Palestinian people have been left on their own to lead the struggle to obtain their legitimate rights,” he said.

More Lebanese than others

Last Friay, the patriarch highlighted the plight of exiled Lebanese living in Israel, called for a reconciliation process, and said that “treating Lebanese in Israel as enemy agents is unacceptable.”

In an interview with LBCI TV, the patriarch said that it is time for “reconciliation” with this part of the population, since they are neither “criminals” nor “traitors”. ” Had they fought against Lebanon? Had they fought against the Lebanese state? Had they fought against Lebanese institutions?” Rai asked rhetorically ” They – he added – are Lebanese like others, in fact maybe more so” because they are not the ones who have “impeded the presidential election”, have not created refugees and poverty, nor have they “created an economic and social crisis in Lebanon”. A possible reference to Hezbollah which has impeded the presidential election and created an economic crisis by driving away the tourists and replacing them with refugees from neighboring Syria.

Reportedly under orders from Iran, thousands of Hezbollah fighters are assisting the forces loyal to president Basher al Assad against the rebels who are trying to end the Baath party and Assad clan dictatorship, resulting in the killing of over 162,000 , the displacement of over 10 million Syrians and the fleeing of nearly three million to neighboring countries. Every 1 in 4 residents of Lebanon is now a Syrian refugee.

What is significant here according to analysts is that FPM leader Michel Aoun who is reportedly extremely close to the patriarch never raised his voice in defense of this trip which is extremely important for the Christian Maronite community in the entire Middle East .

Aoun is closely allied with Hezbollah and the Syrian regime .

“It disregards all Lebanese conventions and principles, and constitutes a breach of the pact of coexistence,” Geagea told Rai during a telephone call, according to a statement from the LF leader’s press office.