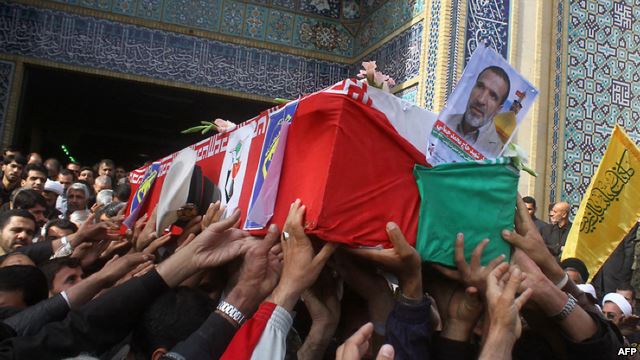 People carry the coffin of Mohammad Jamali Paqale, an officer of the Revolutionary Guards reportedly killed in fighting in the Syrian capital Damascus, during his funeral in the southern city of Kerman in November 2013.
Share:

Iran’s military is mourning another senior Revolutionary Guard officer killed while fighting in Syria, and buried at home with full honors, according to a report by Dubai based newspaper the Gulf News

Abdollah Eskandari is reportedly the 60th Iranian officer to die as a “martyr” in Syria. At funerals that are crowded with officers, the fallen officers are eulogised for “defending” the Shiite shrine of Zainab in Damascus.

Together with its Lebanese Shiite proxy Hezbollah, Iran has provided military and economic support that has enabled Syrian President Bashar Al Assad to turn the tide in a three-year civil war.

For Iran those results boost its two-track strategy of pushing for a negotiated solution in Syria, while doing what it can to ensure the survival of the regime. Tehran wants to guarantee that Al Assad, who is seeking reelection in a June 3 poll that critics call a sham, can negotiate with rebels from a position of strength.

But the cost for Iran has been high, in blood and treasure, as well as in tarnished reputation — certainly among Sunnis in the Middle East — for engaging in a Shiite-vs-Sunni sectarian war in which its Syrian ally targets civilians with barrel bombs and chemical weapons.

The extent of Iran’s material support for Al Assad remains murky. Iran says it has trained more than 50,000 pro-regime Syrian militiamen. But reports that it has mobilised thousands of Shiites from Iraq and Afghanistan to fight alongside regime forces, while providing military advisers to train them, are disputed here.

An Iranian Revolutionary Guard commander boasted this month of 130,000 Iranian reservists being primed for the Syrian battlefield and compared the struggle with Iran’s “sacred defence” of its soil during the ruinous 1980s war with Iraq. He said the Syrian regime was “no longer at risk of collapse”. Meanwhile, militant Iranian websites say a recruitment campaign has yielded 3,000 volunteers.

“Iran is playing a huge role in financing the war machine of the [Syrian] regime, in terms of money, material, oil, whatever the regime needs that they can provide, Iran does it,” says Jubin Goodarzi, an Iran-Syria expert at Webster University in Geneva, speaking in Tehran. “I don’t think they are holding back on anything that they think can be decisive.”

Last week Iranian Brig Gen Hussain Salami, deputy chief of the Islamic Revolutionary Guard Corps (IRGC), applauded Syria for “victory in the field”, saying it had paved the way for the “political phenomenon” of the election. Yet large swathes of Syria are in rebel hands, muddying any mandate Al Assad may claim from victory.

Even in Iran, no one expects Al Assad to ever be able to defeat the spectrum of anti-regime factions backed by the US, Saudi Arabia, and Qatar, which are mostly Sunni and include Islamist and Al Qaida-linked groups that rule brutally.

President Barack Obama last week pledged to “ramp up more support for those in the Syrian opposition who offer the best alternative to terrorists and a brutal dictator”, in addition to existing clandestine training operations.

Amidst the war effort, Iran has also played peacemaker. It takes credit for negotiating an agreement earlier this month for besieged rebels to peacefully depart Homs, the erstwhile “capital of the revolution.” And Iran was crucial last fall in convincing Al Assad to give up Syria’s arsenal of chemical weapons, say Iranian sources.

“Our policy toward Syria has not changed,” says a senior Iranian official who spoke on condition he not be named. “There is no need for the Syrian Army to have [foreign] advisors, to have more ammunition, to have more people to be able to fight. Our role has been as in the past. We have not increased our presence or our activities in Syria.”

In early 2013, Al Assad’s forces were on the defensive. Alarmed by the prospect of his eventual defeat, Iran stepped up supplies of essential inputs, from cash to intelligence to encouraging proxy warriors that helped shore up the regime. Behind Iran’s loyalty to Al Assad is a security calculation, says Nasser Hadian Jazy, a political scientist at Tehran University.

“To be frank, everyone knows that [Al] Assad cannot rule Syria as a unified country, no matter if he is able to suppress all the rebellion,” says Hadian Jazy. “So Iran wants to preserve the regime, because its absence will be chaos [and] insecurity.”

That means that Al Assad’s presence is not as important to Iran as some form of functioning state, ideally one not hostile to Iran.

The senior official said Iran wanted to help Syria find a political solution. “From the beginning we have said that it is not for Iran, for America, for others, to choose for the Syrian people who should be their president.”

One was UN chief Ban Ki-Moon’s offer — rescinded under US pressure — to invite Iran to take part in Syria talks in Switzerland last January. The failure of those talks, and intensive infighting between rebels, tipped Iran’s hand towards extending more military aid to Al Assad.

More than 160,000 people have been killed in Syrian civil war, over 10 million have been displaced within Syria and and over 3 million fled to neighboring countries as refugees.