Putin’s Eurasian Union Looks Like a Bad Deal for Russia 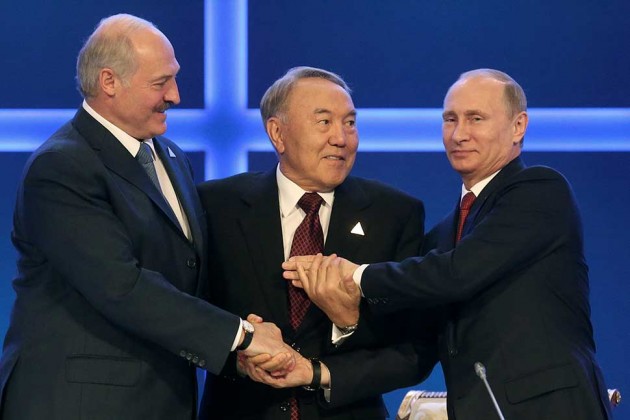 From left: Belarusian President Alexander Lukashenko, Kazakh President Nursultan Nazarbayev, and Russian President Vladimir Putin attend a signing ceremony during the Summit of Supreme Eurasian Economic Council on May 29 in Astana, Kazakhstan
Share:
Vladimir Putin calls it a counterweight to the world’s economic superpowers. On Thursday he agreed with the presidents of Kazakhstan and Belarus to form a new trading bloc, the Eurasian Economic Union, with plans for the former Soviet republics of Armenia and Kyrgyzstan to join soon. “The just-signed treaty is of epoch-making, historic importance,” Putin said at a ceremony in the Kazakh capital of Astana.

Alas for Putin, the new bloc comes nowhere near the big leagues. Even after Armenia and Kyrgyzstan enter, its total gross domestic product—about $2.6 trillion—will be less than one-fifth that of the European Union or the U.S. and less than one-third of China’s. Russia will account for more than 80 percent of the bloc’s GDP and a similar share of its roughly 178 million population. Creation of the union “won’t really register on the radar of the global economy,” says Nicu Popescu, an analyst at the EU’s Institute for Security Studies in Paris.

Russia’s motives appear more political than economic. “The Eurasian Union is a realization of Putin’s geopolitical dream,” Nikolay Petrov, a scholar at the Carnegie Moscow Center, told Bloomberg News, adding that it’s “a demonstration that Russia is not alone.”

But will it be a good deal for the countries that join? Former Soviet republics have deepened their trade ties with Europe and China in recent years. The EU is now the No. 1 trading partner of Russia, Kazakhstan, and Armenia, while China is Kyrgyzstan’s top partner. By contrast, Popescu says, trade flows between Russia, Belarus, and Kyrgyzstan declined about 7 percent last year.

The Eurasian Union will encourage members to trade among themselves by raising tariffs on goods imported from outside. A glimpse of what that could mean can be seen in Kazakhstan, which has already raised import duties after joining a Russian-led customs union that preceded the new bloc. Middle-class Kazakhs now have to buy “substandard Russian cars rather than freely imported ones,” economist Anders Aslund, of the Peterson Institute for International Economics in Washington, wrote in an analysis last year.

Armenia and Kyrgyzstan, which are World Trade Organization members, are asking Russia to compensate them for the probable retaliation they’d suffer from joining the bloc; its tariff regime would likely put them in breach of WTO rules. Even Ukraine’s pro-Russian former president, Viktor Yanukovych, never promised to join the Eurasian Union, although he favored close trade relations with Russia.

So why are the other countries joining? Kazakh President Nursultan Nazarbayev has been careful to maintain good relations with Moscow, in part because his country

exports much of its oil through Russian pipelines. Armenia has a security partnership with Russia, and Kyrgyzstan fears becoming isolated and vulnerable to economic pressure from China. Belarus didn’t really have a choice about joining, as its economy would grind to a halt without heavily subsidized Russian oil and gas.

Aslund contends that the bloc will hurt Russia as much as it hurts its neighbors. “Russia’s relentless aggression to bring countries into its union turns potential friends into foes,” he wrote. “In various ways, Russia has to pay for the costs it causes others, leaving it with the bill.”