Syrian cough syrup “Cemo” addiction on the rise in Beirut 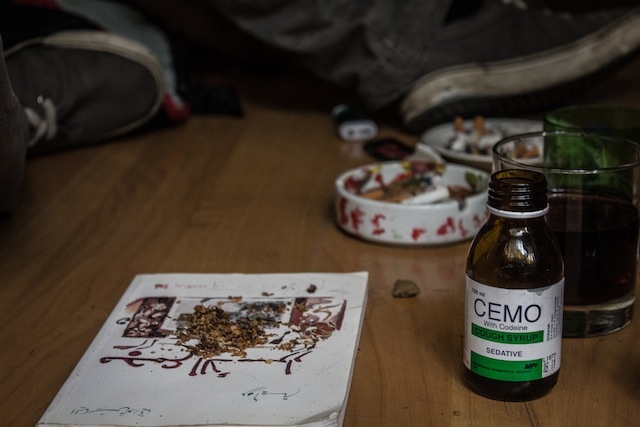 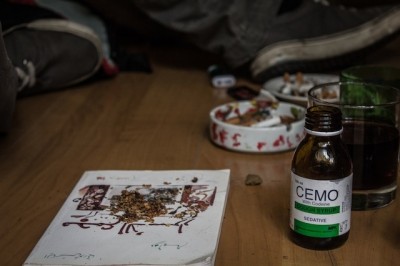 “You drink the whole bottle and go numb for about five hours straight,” Nada, a 22-year-old bisexual woman from Lebanon, told me. “Nothing matters in that moment. It’s just you, your thoughts. All the rest is gone.”

Nada lives in one of Beirut’s only collectives, a shared flat in the city’s tree-lined Geitawi neighborhood. All of her housemates are boys. Her parents know nothing about it. “If they did they would literally kill me,” she says, wearing a grin of defiance on her round face. They also don’t know Nada used to be addicted to Cemo, a Syrian cough syrup that contains high amounts of the opiate codeine.

Nada got addicted to it about a year and a half ago, when sipping syrup became popular among her friends. “It just exploded! Out of the blue,” she explained to me. According to Nada, Cemo first caught on at the Lebanese American University (LAU) in Beirut, a private institution where sons and daughters of wealthy Lebanese often enroll. “At LAU you just pay to get your degree,” Nada explained to me. “That’s why a lot of them have time on their hands and entertain themselves with Cemo.”

It was Fatma, Nada’s ex-girlfriend, who first got Nada into Cemo. One desultory afternoon they rolled a couple of joints, got into a car, blasted “Cough Syrup” by Young the Giant, and drove around looking for Cemo. This meant heading to Dahiyeh, the southern suburb of Beirut controlled by Hezbollah.

It took a few months for Nada to get hooked. “Every time something was wrong or I had nothing to do, I drove to Dahiyeh and bought a bottle of Cemo. I also think it might have been one of the reasons my relationship ended. When you drink the whole bottle and get high off it, you don’t feel like having sex or touching someone.”

On a Sunday morning this April, we drove to Dahiyeh to search for some of Lebanon’s last Cemo bottles. Just over a month beforehand, after an investigation by Lebanese TV station Al Jadeed on Cemo, the government cracked down on the illegal trade. One of the dealers interviewed on the show claimed to sell “100 bottles a day.” According to Nada there are at least 15 to 20 dealers in Dahiyeh. No comprehensive public health study has been conducted on Cemo users in Lebanon, but public scrutiny has forced the trade further underground. As a consequence many of the dealers have become extra careful, and despite the security that a lawless neighborhood such as Dahiyeh guarantees from the police, the army, and the government, new faces are met with mistrust and aggressive precaution.

Cemo is produced by the Mediterranean Pharmaceutical Industries (MPI), a company based in the outskirts of Damascus. It’s trucked into Lebanon in shipments disguised as light bulbs. According to Hassan, a friend of Nada, as the Syrian war deepened after the initial 2011 uprising, it has become increasingly easy for smugglers to bring Cemo into the country, a situation that has indirectly fostered the current boom in consumption.

Dr. Fouad Fouad, professor at the American University of Beirut (AUB), told me that “Cemo is just like any other drug; maybe a less powerful one than cocaine, nonetheless an easy one to get addicted to.” When I told him that many young Lebanese are addicted to it, his reaction was one of surprise: “From what I know, about four or five years ago the Syrian government banned Cemo because too many people started abusing it, so I am not sure how these batches arrive in Lebanon.”

After the government cracked down on Cemo last month, many dealers have changed their locations. So we were told to look for small graffiti on a wall that read “Mamnou’ el woukouf” (“Don’t park here”). That’s where Nada’s Cemo dealer would be waiting.

We saw it and found Azer, a middle-aged, slightly overweight Cemo dealer. He sat with his brother in front of his four-story house. Veiled women cleaned the stairs behind us. As we approached him Nada honked, rolled down the window, and signaled with her hands how many bottles she wanted: three.

“A hundred dollars each,” he stated.

Then Nada said she wanted one one. “It used to be $25,” she said, laughing as we drove away. She turned around. “Do you remember last year when we were high and used to laugh and say, ‘Imagine if Cemo went up to $100? What would we do then?’”

“I know where you can still find it for less, but there is no way I am going to go there,” Hassan answered. About a five-minute drive away along the main road to Bourj el Barajne, there’s a Palestinian refugee camp nicknamed Hay Cemo, or Cemo Neighborhood. But my guides were scared to venture there. “Too risky,” Hassan said.

Hassan used to be a regular at the Palestinian camp, but he stopped going there after an accident. “The last time I went to Burj el Barajne camp,” he recalled, “I was invited to enter a large room and pick up the Cemo. Inside I saw several men wearing balaclavas and holding guns. I am from Dahiyeh and know a lot guys around there, but while we were talking and joking around, one of the guys took out his gun and mockingly pointed it at my head.”

As we drove away I snapped a photo of the street and the “No Parking” sign with my phone. A scooter pulled up next to us. “Shit,” Nada said, and locked the doors of the car. “He is looking. He might call someone from Hezbollah to come check on us. Let’s go—now.”

Spooked, we drove back to Nada’s place to take the Cemo. We poured the cough syrup into glasses and mixed it with cola. Hassan rolled a joint to go with it, and we drank. Nada warned us that it is not a social drug. Everyone in the room went numb, sitting in silence and not really interacting. Nada was the first one to fall back on the bed and close her eyes.