Pressure on FIFA to stop Israeli from obstructing Palestinian football 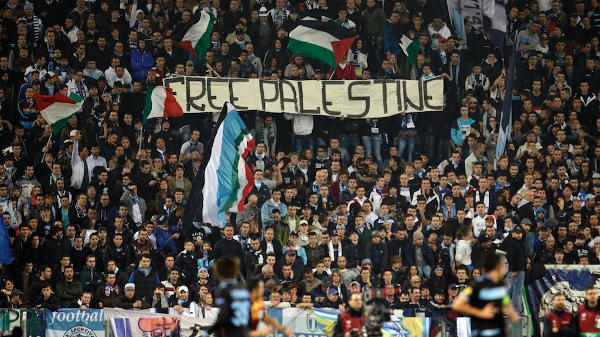 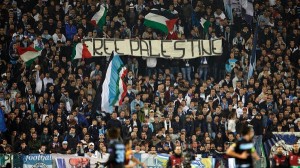 Palestinian leaders have turned to the president of soccer’s leading body to denounce the targeting of Palestinian athletes and their visitors by Israel — which the head of Palestine’s football association called the “bully of the neighborhood.”

FIFA’s head Sepp Blatter met with Palestinian and Israeli leaders as part of a three-day visit to the region, during which Jibril Rajoub, head of the Palestine Football Association (PFA), said he will officially seek FIFA sanctions against Israel, unless the government of Prime Minister Benjamin Netanyahu lifts travel restrictions on Palestinian players and their foreign visitors.

“First of all, we want Israel to recognize the Palestinian sports entity,” Rajoub told VICE News a day after his meeting with Blatter. “I was born an optimist. Now the ball is on Israel’s side. We are waiting.”

Rajoub expressed hopes that the international body could successfully mediate on the issue, but warned that, if it doesn’t, the PFA “will have no other option but to ask the FIFA Congress to ask for sanctions against the Israeli Football Association,” he said.

Rajoub said in the past that the Israeli occupation was “destroying Palestinian sports,” and that he would “demand the expulsion of Israel from FIFA and the International Olympic Committee.” Several Middle Eastern countries have already said they will support Palestine in that bid.

In Ramallah, on Monday, Blatter visited Yasser Arafat’s mausoleum and met with Palestinian President Mahmoud Abbas, with whom he discussed how Israeli-sanctioned restrictions of movement in the occupied territories affect Palestinian athletes.

“Unfortunately, Israel places hurdles on this activity, which we are supposed to exercise freely,” Abbas told Blatter, according to Reuters. “At a time when we consider ourselves to be active FIFA members, we see that Israel, the government of Israel, tries to place these hurdles in the path of our activities.”

On Tuesday, Blatter also met with Netanyahu, as well as delegates of the Israel Football Association — including chairman Avi Luzon. The video below, released by Nethanyau’s office, shows some moments of that meeting.

Blatter told Abbas that a mediation on the conflict’s impact on soccer would be an important first step to engage with the region’s wider problems.

“We shall try, we shall find a solution — a solution that sport is not politics, but sport, in this case, can help to solve the problem and if we are able to solve this problem it could be also a good, let’s say step, to solve other problems that you have in this region,” he told Abbas.

Blatter also said he hopes a solution will be reached ahead of FIFA’s congress — which is scheduled to take place in Sao Paulo, Brazil, on June 10 and 11 — right before the World Cup’s kickoff.

“I think at the congress we should try to be in the sporting spirit and not in the spirit of punishment,” Blatter said a press conference. “Let’s hope that tomorrow I can give you some positive information. Before we come to the Congress we will have a situation that will give to Palestinian football and to the visitors of Palestinian football, I would say, a good future.”

Speaking with VICE News, Rajoub expressed frustration that earlier talks with the soccer association had failed to translate into facts — but said he continued to hope that “our FIFA family” would stand up against Israel’s “bullying.” But critics of FIFA said sanctions were unlikely to materialize.

“I do not think in any way whatsoever FIFA would allow that kind of vote to pass,” sports columnist Dave Zirin, who often writes about the intersection of soccer and politics, told VICE News. “FIFA has had many an opportunity to show that they are serious about stopping Israel’s practice of preventing the Palestinian soccer team from actually being able to develop and grow.”

‘What’s this security issue? It’s a pretext for their racism, and fascism against the Palestinian people.’

Travel restrictions have long affected Palestinian players and their guests, Rajoub said, with coaches and players from several Muslim countries regularly being denied entry by Israel, which controls all travel to the Palestinian territories.

“Israel uses security as an excuse,” Rajoub said, citing many examples in which some members of visiting teams would be granted entry visas but not others — apparently arbitrarily. “What’s this security issue? It’s a pretext for their racism, and fascism against the Palestinian people.”

Palestinian soccer players have also suffered the consequences of the Israeli occupation which has affected their fellow Palestinians. But, some suggested, they may have been deliberately targeted by the Israeli army and security forces.

A spokesman for the Israel Defense Forces (IDF) did not immediately respond to VICE News’ request for comment.

‘They have been a national team without a nation.’

“It really does speak volumes that this is even a question, whether or not the team itself has been targeted by the Israeli military,” Zirin said. “But when you consider all the building in the Palestinian territories, or the shootings that recently took place of those Palestinian children, the idea that the Israeli military would prevent the flowering of the Palestinian soccer team does not seem that out of bounds, given what they have shown that they are willing to do.”

Despite the many obstacles it faces, the Palestinian soccer team has been a source of joy, pride, and hope: “They have been a national team without a nation,” he said.

But the occupation’s impact on Palestinian soccer is not only a matter of denied travel permits. 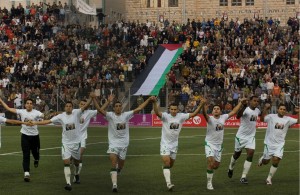 Last January, two Palestinian teenagers were shot by Israeli forces and maimed by the officers’ dogs as they were walking home after a training session. Israeli officials claimed the two were about to throw a bomb. The boys — one of whom received seven bullets to his foot — were forced to quit the game, with doctors wondering whether they would be able to walk again.

That was not an isolated case, as Palestinian youth — athletes or not — are a regular target of attacks.

The conflict also took a toll on Palestine’s national team. Three of its members were killed during the 2009 bombing of Gaza, within a few hours of each other, and several have been jailed. Blatter himself spoke out for the release of one of them — Mahmoud Sarsak — who was held for three years without charges, and went on a three-month hunger strike to protest his detention.

But the detentions go way back: Palestinian soccer sensation Zakaria Daoud Issa, who died in 2012, spent 16 years in an Israeli jail for his alleged connection to Hamas.

‘The role of FIFA is to make sure that in both countries you can play football.’

It’s not the first time FIFA has attempted to facilitate the tense relationship.

In July 2013, Blatter launched the association’s Israel-Palestine task force after another trip to the region. In the video below, Blatter discusses the initiative, which included the appointment of liaison officers on both sides of the conflict.

“We are not in politics but you know that football also has a political dimension,” he says in the video, highlighting the challenges faced by Palestinian players in particular. “The role of FIFA is to make sure that in both countries you can play football according to the statute of FIFA.”

Blatter’s involvement in the region comes as part of his FIFA mandate: to promote the game worldwide and ensure everyone can play it.

But he also said he feels “at home” in Palestine and called himself the “self-declared ambassador of the Palestine people.”

In Ramallah, on Monday, Blatter participated in an event celebrating the PFA also attended by Sheikh Ahmed bin Hamad, a member of Qatar’s royal family and the chairman of the Al Ahli soccer club there. FIFA’s decision to award the 2022 World Cup to Qatar has been widely criticized — with Blatter himself recently calling it “a mistake.”

Human rights groups have denounced widespread abuse of migrant laborers employed in World Cup-related construction there, and criticized FIFA for its silent complicity in the abuse.

Zirin wrote that, “looking to FIFA for any kind of moral guidance is laughable.The locations of the next two World Cups, Russia and Qatar, contain enough human rights violations to keep Amnesty International busy until the next century.”

And while the plight of Palestine’s national soccer association is an important one, he added, FIFA and Blatter’s own motives are questionable.

“The man has an ego that would not fit in Maracanã stadium,” Zirin said. “I think he loves the idea of being seen as broker for peace between Israel and Palestine, because the enormity of that task reflects upon the enormity of his own ego.”