Obama defends his foreign policy, denies America is in decline 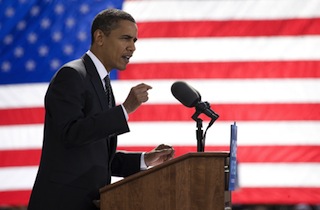 President Barack Obama defended his foreign policy record on Wednesday and laid out his plan for how to deal with future global events, but told those attending the graduation ceremony at the U.S. Military Academy that “America must always lead on the world stage.”

The military “always will be the backbone of that leadership,” Obama said, but U.S. military action “cannot be the only — or primary — component of our leadership in every instance.”

He also noted that since he took office, America had ended the Iraq war and was preparing to end the Afghanistan conflict, decimated al Qaeda’s leadership in the border region between Pakistan and Afghanistan, and eliminated Osama bin Laden.

“This lessens the possibility of large-scale 9/11-style attacks against the homeland, but heightens the danger to U.S. personnel overseas, as we saw in Benghazi; or less defensible targets, as we saw in a shopping mall in Nairobi,” Obama said. “We need a strategy that matches this diffuse threat; one that expands our reach without sending forces that stretch our military thin, or stir up local resentments.”

Returning to a theme he’s visited throughout his two terms in office, the President said he would continue to push for closing the terrorist detention facility at Guantanamo Bay “because American values and legal traditions don’t permit the indefinite detention of people beyond our borders.”

“What makes us exceptional is not our ability to flout international norms and the rule of law; it’s our willingness to affirm them through our actions.”

The President said “America has rarely been stronger relative to the rest of the world,” contending that “those who argue otherwise — who suggest that America is in decline, or has seen its global leadership slip away — are either misreading history or engaged in partisan politics.”

The world is changing with accelerating speed, which presents opportunity “but also new dangers.”

The President’s speech came a day after he spelled out a plan that would leave nearly 10,000 troops in Afghanistan at year’s end.

“We can not only responsibly end our war in Afghanistan and achieve the objectives that took us to war in the first place, we’ll also be able to begin a new chapter in the story of American leadership around the world,” Obama said in the White House Rose Garden on Tuesday, detailing his plan for Afghanistan and previewing his foreign policy address.

That next chapter comes as U.S.-led wars in Afghanistan and Iraq come to a close, leaving a chance for Obama and his team to think broadly about the U.S. role in the world going forward. On Tuesday, Obama announced that 9,800 troops would remain in Afghanistan after 2014, providing the next Afghan president signs on to a security agreement.

Although Obama enjoyed high-profile foreign-policy successes at the beginning of his time in office, including the military mission to find and kill bin Laden, he’s come under harsh criticism recently for what opponents say is a passive approach abroad.

They cite his record in Syria, where he backed away from airstrikes after President Bashar al-Assad’s regime was reported to have used chemical weapons on citizens. Congress balked at approving the military force, leaving Obama to instead negotiate a deal that would remove the chemical stockpiles from al-Assad’s control but keep al-Assad himself in power amid an ongoing civil war.

Before the President spoke on Wednesday, Secretary of State John Kerry defended U.S. policy for Syria, including the deal struck to get chemical weapons out of the country.

Speaking to CNN’s “New Day,” he said he found it difficult to believe that critics would have preferred a military strike and hurting the al-Assad regime temporarily. He said that 92% of Syria’s chemical weapons have been removed, and the other 8% are under control, waiting to be removed.

“It’s remarkable to me that people simply want to refuse to accept that we’re better off getting all of the weapons out than striking for one or two days and doing damage to some of them,” Kerry said.

Critics of Obama’s foreign policy also have said the President’s clear assertion that military force is off the table in Ukraine sends the wrong message to other countries — namely China — that have their own territorial disputes with neighbor states.

The United States and its allies have imposed tough economic sanctions on Russia for its incursion into Ukraine, though that step hasn’t done much to quiet the arguments coming from Obama’s detractors.

The President and his aides bristle at the notion that he’s been too passive, however, saying his approach avoids errors. On Tuesday, Obama hosted a lunch with leading foreign policy columnists to discuss his broader vision.

The President last spoke broadly about his foreign policy during a trip to Asia in April, defending himself against those who say his policy lacks a discernable direction.

“You hit singles; you hit doubles; every once in a while we may be able to hit a home run,” Obama said in Manila, lashing out at those who argue for greater use of military force in conflicts abroad.

“Why is it that everyone is so eager to use military force?” Obama asked. “After we have just gone through a decade of war at enormous costs to our troops and our budget. And what is it exactly that these critics would have accomplished?”

The President’s speech at West Point will begin a larger foreign policy push that will carry into his upcoming trip to Europe that includes a G7 summit in Brussels and a visit to Poland, which is designed to reassure Eastern European allies after Russia’s intervention in Ukraine.