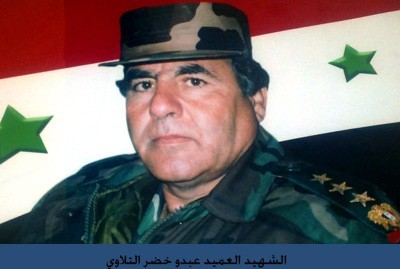 The General was identified as Eyad Ali Harfoush, aka “the Eagle” who hails from the town of Latakia in western Syria.

Harfoush is reportedly the highest ranking Syrian army officer in Aleppo, the largest city in Syria.

Another pro Rebels website reported that Syrian Army General Abdo Khodr el Tellawi was assassinated along with his kids Ahmad and Ali in the Zahraa neighborhood of the city of Homs. Khodr who also hails from the town of Latakia was buried on Monday, according to the report