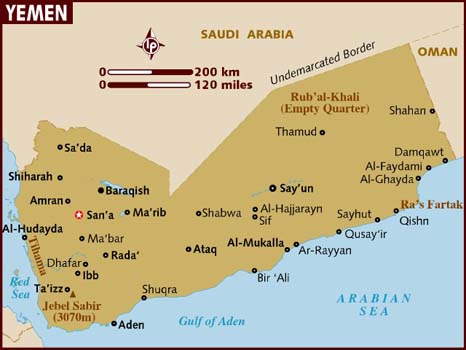 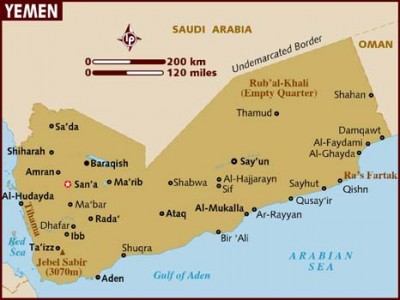 Yemen’s security forces killed an al Qaeda leader suspected of attacks on foreign diplomats on Sunday, the Defence Ministry’s news website said, in a raid north of the capital Sanaa in which four other militants died and four were captured.

A government official said an intelligence officer also died when anti-terrorism units raided a house in Bayt al-Othdri, in the Arhab region, and fought a gunbattle with its occupants.

Four other militants were captured alive, the official said.

The raid was part of an escalating campaign against militants responsible for a wave of attacks across the country.

“The forces exchanged fire with the wanted men who were holed up inside a house,” the official, who asked to remain anonymous, told Reuters. “Five were killed and four were captured.”

The Defence Ministry’s www.26sep.net website quoted “informed sources” as saying that one of the dead was Saleh al-Tais, who it said was involved in the killing in January of Ahmad Sharafeddin, a delegate at national reconciliation talks representing the Shi’ite Muslim Houthi group and a former dean of the law faculty at Sanaa University.

The website said Tais had also been involved in attacks on diplomats and other foreign targets, but gave no details.

President Abd-Rabbu Mansour Hadi said last month that Yemen was at war with al Qaeda, as the militants have stepped up attacks on government facilities after being driven out of strongholds in southern Shabwa and Abyan provinces.

Yemen has been in turmoil since 2011, when mass protests forced long-ruling president Ali Abdullah Saleh to step down.

As well as the al Qaeda threat, the country faces challenges from separatists in the south and an emboldened Shi’ite tribal militia trying to cement its control of the northern highlands.

Clashes have repeatedly erupted in the past months between government troops and members of the Houthi group – named after the Shi’ite tribe of its leaders – as Sanaa struggles to restore nationwide control.

Yemeni troops killed five Houthi members on Sunday in fighting outside the city of Omran in the northern province of the same name, tribal sources and local officials said. Three soldiers were killed.

The fighting followed two days of clashes outside Omran city last week in which a total of 24 from both sides died.

Government forces killed scores of al Qaeda militants last month in a campaign against their strongholds in southern Shabwa and Abyan provinces.

Al Qaeda in the Arabian Peninsula, regarded by the United States as one of the most active wings of the network founded by Osama bin Laden, has responded with a series of hit-and-run attacks across the country.

In the latest attack, dozens of militants in army uniforms hit government buildings and army and police outposts in Seyoun, the second biggest city in southeastern Hadramout province, early on Saturday. Authorities said 12 soldiers and 15 militants were killed.

The stability of Yemen, which shares a long border with the world’s top oil exporter, Saudi Arabia, is an international concern. The United States has stepped up its support for the government and military, including conducting drone strikes.