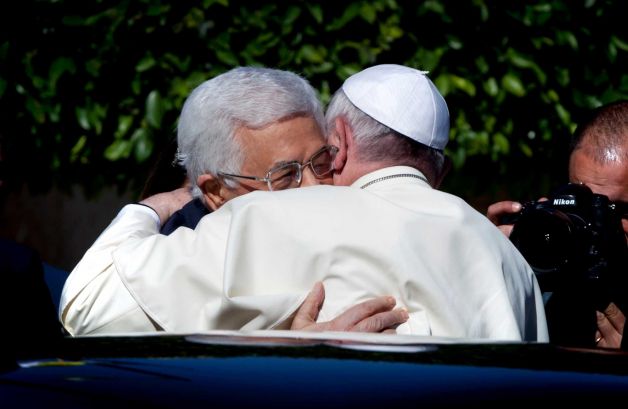 Palestinian President Mahmoud Abbas, left, and Pope Francis hug each other as Francis arrives at the Palestinian Authority headquarters in the West Bank city of Bethlehem on Sunday, May 25, 2014. Francis landed Sunday in the West Bank town of Bethlehem in a symbolic nod to Palestinian aspirations for their own state as he began a busy second day of his Mideast pilgrimage. Photo: Nasser Nasser, AP
Share:

BETHLEHEM, West Bank — Arriving here on Sunday, Pope Francis made an impassioned appeal for an end to the Israeli-Palestinian conflict and gave the Palestinians an uncommon boost by openly endorsing “the State of Palestine.”

Francis called for “a stable peace based on justice, on the recognition of the rights of every individual, and on mutual security,” and for intensified efforts for the creation of two states — meaning a Palestinian state alongside Israel — within internationally recognized borders.

“In expressing my closeness to those who suffer most from this conflict, I wish to state my heartfelt conviction that the time has come to put an end to this situation, which has become increasingly unacceptable,” he said in remarks after a meeting with President Mahmoud Abbas of the Palestinian Authority.

Referring to Mr. Abbas as “a peacemaker,” the pope then attested to “the good relations existing between the Holy See and the State of Palestine,” according to an official translation of the speech provided by the Holy See press office.

Mr. Abbas said he would welcome any initiative issued by the pope to make peace real.

This was the first papal visit to the Palestinian territories since the November 2012 General Assembly vote upgrading Palestine to a nonmember observer state of the United Nations, giving it the same status as the Vatican.

Ashraf B. Khatib of the Palestine Liberation Organization’s Negotiation Affairs Department expressed satisfaction, saying, “The whole visit marks a head of state coming to a state.” The pope was received at the presidential compound here by an honor guard and all the trappings of an official state visit.

Then, as the pope traveled in an open-top car from the compound toward Manger Square, he made an unscheduled stop at a section of the wall with a military watchtower separating Bethlehem from Jerusalem, part of the contentious barrier Israel has constructed along and through the West Bank. The barrier is loathed by the Palestinians, but Israel argues that it is essential for Israeli security.

Francis’ Holy Land visit has been billed by the Vatican as a purely religious pilgrimage centered around meetings in Jerusalem later Sunday and Monday with the Ecumenical Patriarch Bartholomew of Constantinople, commemorating the 50th anniversary of the historic reconciliation between the Roman Catholic and the Eastern Orthodox churches.

But for the Palestinians and for Israel, the political dimensions of the visit were inescapable, with every papal word and gesture coming under scrutiny.

“We and the Vatican are twins at the United Nations,” said Issa Kassissieh, Palestine’s ambassador to the Holy See, in a recent briefing with reporters. By arriving here directly by helicopter from Jordan, and not via Israel, Mr. Kassissieh said, the pope was sending “a political message that he is coming to the State of Palestine.”

But the visit is taking place at a time of upheaval in the Middle East, and weeks after the breakdown of the latest round of Israeli-Palestinian peace talks.

The Palestinian authorities were hoping to use the visit to the place where Jesus is said to have been born to highlight the hardships of Palestinian life under Israeli occupation and to press for a sovereign, independent state on the ground.

Manger Square, where Francis was to celebrate Mass in front of the Church of the Nativity, was bedecked with huge photomontages of classic artworks featuring Christian imagery superimposed with images from the Palestinians’ modern reality. So Caravaggio’s “Ecce Homo” merged with a photograph of Palestinians crossing an Israeli checkpoint on their way to Jerusalem, equating Palestinians with Jesus and his suffering.

The stage was decorated with a backdrop of a Nativity scene, Palestinian and Vatican flags, and a border of flowers in yellow and white, the Vatican colors. Up to 10,000 people were expected to try to cram into the square, mostly Palestinian Christians from the West Bank and about a third of them Christian Arabs and foreign workers from Israel who arranged to come through their churches.

A cheer went up in the square when a large screen broadcast Francis emerging from a Jordanian helicopter at the Bethlehem heliport, having landed half an hour ahead of schedule.

“I said I have to see our father, the peacemaker,” said Khader Azer, 39, a chef from Ramla, a mixed Jewish-Arab city in Israel. “Only God can make peace, but Pope Francis is trying.”

Francis’ reputation for humility as a pope of the people and the poor has resonated with many Palestinians, Christian and Muslim.

Later, at the Deheisheh refugee camp, the pope was to see more photomontages featuring refugee scenes from the 1950s. Jack Persekian, director of the Palestinian Museum, which produced the images, said the works were meant to reflect “a continuous ordeal.”

After celebrating Mass in Manger Square, the pope was to have lunch with five families who were chosen, according to Palestinian officials, to express the difficulties that Israeli policies cause the Palestinians. One family came from Gaza, the isolated, Hamas-ruled coastal enclave, where only about 1,300 Christians still live. Another family is split between Bethlehem and Jerusalem because of travel restrictions.

After a private visit to the Grotto of the Nativity, Francis was to meet 100 children from the refugee camps of the Bethlehem area at a community center on the edge of the Deheisheh camp, which is home to about 12,000 Palestinians exiled from their former family homes since the 1948 Arab-Israeli war.

In all, he was scheduled to spend six hours and 40 minutes in Bethlehem out of a three-day pilgrimage to the region. From Bethlehem, he was to fly by helicopter to Tel Aviv for an official Israeli reception at Ben-Gurion International Airport, and from there to Jerusalem, navigating the fraught politics of the Israeli-Palestinian conflict.

Late Saturday, the Israeli police arrested rightist Jewish activists during a protest on Jerusalem’s Mount Zion. Venerated by Christians as the location of the room of the Last Supper and by Jews as King David’s burial place, the mount has become a focal point of tensions ahead of a private Mass that Francis is scheduled to celebrate there on Monday.

Manger Square in Bethlehem is now relatively tranquil, but once it was the scene of fierce gunbattles. In 2002, the Israeli Army engaged in a five-week standoff with armed Palestinians who broke into the Church of the Nativity compound, fleeing from invading Israeli forces.

The other side of Manger Square is dominated by Bethlehem’s central mosque.

Though Christians once were a strong majority in Bethlehem, the community has dwindled, as elsewhere in the Middle East, after decades of emigration spurred by opportunities abroad, violence and economic hardship. Christians now make up only about 35 percent of the population of the city. In general, Christians in the Holy Land now make up barely 2 percent.

Paul VI was the first pope to visit Bethlehem, in 1964, when the West Bank was under Jordanian control. Just over a decade later, he called on Israel to recognize “the rights and legitimate aspirations” of the Palestinian people, marking a significant milestone in Vatican-Palestinian relations.

The next two papal visits to Bethlehem, which came under the partial control of the Palestinian Authority in the mid-1990s, were made via Israel.

In 2000, Pope John Paul II was received here by Yasir Arafat. During a visit to the Deheisheh camp, John Paul described the plight of the Palestinians there as “barely tolerable.”

Benedict XVI came to Bethlehem in 2009 and visited the Aida refugee camp. There, to the chagrin of the Israelis, he spoke just a few paces from the separation wall.

Bethlehem’s mayor, Vera Baboun, recently showed reporters pictures of the gift to be presented to Francis by the city: an oil lamp of reddish Jerusalem stone carved with scenes of Bethlehem, the work of local artists. The lamp was to be packed in an olive-wood box engraved with a drawing of the separation barrier and covered with a black-and-white kaffiyeh, the scarf that has become a symbol of the Palestinian struggle.