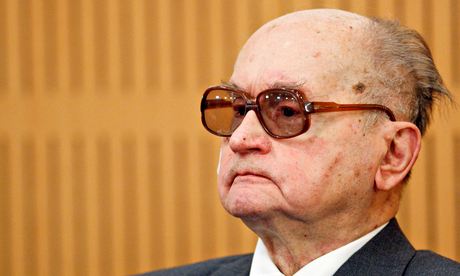 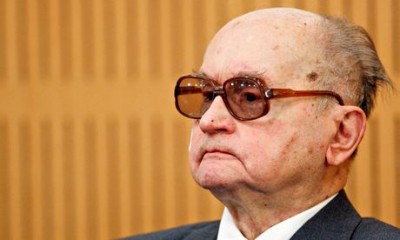 Wojciech Jaruzelski, the expressionless Polish general behind dark glasses who imposed martial law in 1981 to crush the independent trade union Solidarity and nearly eight years later participated in the negotiated revolution that led to the fall of communism in Poland, died Sunday at a military hospital in Warsaw. He was 90.

A hospital spokesman announced the death. The general had a stroke this month and had previously been treated for cancer.

Gen. Jaruzelski, the scion of landed gentry, was deported to the Soviet Union as a forced laborer in 1941 and returned to Poland during World War II as a committed communist in the ranks of the Soviet-created Polish First Army.

Starting in the 1950s, he rose rapidly in the military and political establishments of the new People’s Republic of Poland. After the Soviet-backed government’s fall in 1989, Gen. Jaruzelski’s past was at the center of post-communist debates about historical reckoning and justice.

Gen. Jaruzelski was accused of being Moscow’s stooge, and his political foes repeatedly and unsuccessfully attempted to have him punished for his role in the bloody suppression of protests against the system. He defended himself as a patriot who was forced into the impossible choice of smothering Solidarity himself or watching the Soviet army do it. He said he feared a Soviet invasion would result in carnage; his critics dismissed that as a convenient mirage.

“I served the Poland that existed,” Gen. Jaruzelski said in one of his many exculpatory assessments of his record.

Some saw something incorruptible in the ascetic and disciplined officer.

“He was perhaps the only man in Poland who was a Communist because he believed in communism,” journalist Tina Rosenberg wrote in her Pulitzer Prize-winning book, “The Haunted Land: Facing Europe’s Ghosts After Communism.” Even Solidarity leader Lech Walesa, the general’s onetime nemesis, thought Gen. Jaruzelski loved his country but was born in the wrong era.

Gen. Jaruzelski is survived by his wife, Barbara, and a daughter, Monika.

Wojciech Witold Jaruzelski (pronounced VOI-chekh, VEE-told, yah-roo-ZEL-skee) was born July 6, 1923, and grew up on an estate in eastern Poland. Local peasants bowed to the family as they passed in their carriage on the way to Sunday Mass, he recalled.

His aristocratic ancestors were Polish nationalists, and his mother read to him about the country’s heroes who struggled, generation after generation, to secure Poland’s independence. Distrust of Russia was ingrained, and Gen. Jaruzelski later wrote in his memoir “The Chains and the Refuge” (1992) that “in my childhood imagination, Russians — especially the Bolsheviks — embodied all possible evils.”

Gen. Jaruzelski was educated at a Catholic boarding school and graduated in June 1939, less than three months before Nazi Germany and the Soviet Union carved up his country. The Jaruzelskis fled to Lithuania, where they worked on a farm owned by a Polish family. In 1941, Soviet forces arrested them because of their “socially dangerous” background.

The family was split up, with Gen. Jaruzelski, his mother and younger sister sent to a remote Siberian village near the Mongolian border. His father was sent to a labor camp in another part of Siberia.

The young Jaruzelski cut wood, and the relentless exposure to light reflected off the endless snow damaged his eyes, which was why he later wore his signature tinted glasses.

The family was eventually reunited in the Siberian city of Biysk. Gen. Jaruzelski’s father died of dysentery in 1942.

The future general said he was desperate to fight in World War II , and he joined a Polish army organized by Polish communists and sponsored by the Soviet Union. He was sent to an officers’ candidate school in Ryazan, about 90 miles southeast of Moscow.

Political education at the school emphasized Polish liberation and the benefits of the Soviet alliance, not rigid ideology. But the reason for Gen. Jaruzelski’s conversion to communism is difficult to isolate.

He later spoke of his belief in social justice, but Rosenberg quotes Poland’s last communist prime minister, Mieczyslaw Rakowski, describing Gen. Jaruzelski’s newfound faith as springing from something closer to his fear and awe of Soviet power.

“Jaruzelski and the other generals came out of Siberia with the belief that this is such a force, such a power, that we have to accept this fact and all the consequences that spring from it,” Rakowski said. “It is a generation limited by the tremendous experience of that power.”

Gen. Jaruzelski crossed the Polish border in 1944, and Polish troops celebrated the moment by singing the national anthem and raising the Polish flag. The joy was short-lived.

Gen. Jaruzelski watched the Polish capital burn as the Germans put down the Warsaw Uprising; the underground resistance got no support from Soviet forces just across the Vistula River. Moscow saw a strategic advantage in having the Nazis kill off as many non-communists as possible. “Great empires don’t always act according to moral principles,” Mr. Jaruzelski concluded in “The Chains and the Refuge.”

After the war, Gen. Jaruzelski remained in the military and participated in the two-year campaign to eradicate the remnants of the underground Polish forces, which had turned from resisting the Nazis to fighting the imposition of communist rule.

He rose rapidly in an army that couldn’t find enough talented and pro-Soviet Polish officers. At 33, he became the army’s youngest brigadier general. Four years later, he was the army’s political commissar — a measure of his ideological purity.

By 1968, at 45, Gen. Jaruzelski became defense minister. One of his first acts was to approve the participation of Polish forces in the invasion of Czechoslovakia and the end of the reform movement known as the Prague Spring.

In December 1970, strikes broke out in Poland’s Baltic ports after the government, which set prices, increased the cost of meat and other staples by up to 20 percent. Workers in Gdansk burned down the local Communist Party headquarters. Two police officers were killed in the disturbances.

Polish leader Władysław Gomulka authorized the use of deadly force at a meeting of senior officials that Gen. Jaruzelski attended. Forty-five protesters were killed and 1,000 wounded.

“Some people asked, ‘Why didn’t you stand up and protest those decisions?’ ” Gen. Jaruzelski said in an interview with The Washington Post in 2000. “I can only say today that I regret that. But I also am not amazed that I didn’t do it. Gomulka was senior to me, a prisoner in Stalinist times, a man who did a lot for the sovereignty of this country, a person who maintained the borders. This authority was important.”

In August 1980, Anna Walentynowicz, a diminutive dockworker at the Lenin Shipyard in Gdansk, was fired on a trumped-up charge of theft. Workers at the shipyard, led by an electrician named Lech Walesa, went on strike, demanding their colleague’s reinstatement and a pay raise. As the strike spread, the range of demands expanded to include free-trade unions and the right to strike — alien concepts in the workers’ state and across the Eastern bloc.

Solidarity soon had 10 million members and became a parallel authority in Poland. It was inevitable that this new society, rising from the grass roots, would be seen in Moscow as challenging the very foundation of the communist state, even though Walesa insisted that Solidarity was not seeking to jettison “inevitable realities.”

Others within Solidarity wanted to press for as much power as possible by using strikes to cripple the enfeebled government. They dismissed Soviet exercises on the border as a bluff. The superpower was bogged down in Afghanistan, which it had invaded in 1979 to support a communist government, and could not afford the global political costs of a bloody invasion of Poland.

The Kremlin called for “radical steps” to end “anti-Soviet activity” in Poland. In October 1981, as the crisis deepened, Gen. Jaruzelski became first secretary of the Polish Communist Party’s Central Committee — effectively, the country’s leader. He, too, weighed the possibility of Soviet intervention, and he chose to send Polish tanks into the streets. “It was a lesser evil, but even a lesser evil is also evil,” he wrote of the crackdown in a later memoir, “Older by 30 Years.”

“Our motherland is on the verge of an abyss,” he said in a monotone. “The achievements of many generations and the Polish home that has been built up from the dust are about to turn into ruins. State structures are ceasing to function. Each day delivers new blows to the waning economy.”

The leaders of Solidarity were arrested and put in detention camps. Public gatherings were banned. A curfew was imposed, and censorship was restored.

But Gen. Jaruzelski’s attempt to revive the Polish economy failed. By 1988, strikes were again spreading. His government opened secret talks with Solidarity in an attempt to quell the unrest. The trade union demanded legal recognition.

Formal negotiations — known as the Round Table Talks — opened in 1989. The government agreed to elections, and Solidarity won every seat it was allowed to contest in the lower house of parliament and all but one in the Senate.

The system was doomed, and, with the reformist Soviet leader Mikhail Gorbachev in the Kremlin, there was no one willing to fight its collapse. By August 1989, Poland had a non-communist prime minister — appointed by Gen. Jaruzelski, who had become the Polish president by a vote of parliament the previous month. The Berlin Wall fell several months later.

Gen. Jaruzelski stepped down as president in 1991, and Walesa won the succeeding election.

For the past two decades, Gen. Jaruzelski was the subject of several attempts to prosecute him. In 2011, a court finally ruled that the elderly former general, who was battling cancer, was too ill to stand trial on charges of leading an “armed criminal gang” responsible for the imposition of martial law and for the shootings in 1970.

He was visited in the hospital in 2011 by Walesa, with whom he had found some measure of reconciliation. The meeting was private, but on his Web site, Walesa posted the message “Get well, General.”

Until the end, Mr. Jaruzelski continued to try to burnish his biography. He wrote several books and granted numerous interviews over the years, always replaying and justifying his decisions. He could never quite escape history’s loud echo.