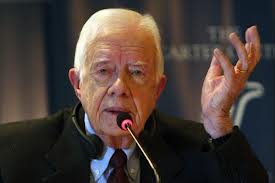 The former US president Jimmy Carter has warned Egypt that its transition to democracy after years of political turmoil is faltering, ahead of presidential elections later this month.

The Carter Center will not be sending observers for Egypt’s 26-27 May election, which many believe retired Field Marshal Abdel Fatah al-Sisi will win following the overthrow of Islamist president Mohamed Morsi last year. However, the center will be sending a small team of experts.

In a statement issued on Friday, the Carter Center warned that “Egypt’s political transition has stalled and stands on the precipice of total reversal,” and said Morsi’s overthrow deepened the political unrest in the country.

Egypt’s military-backed interim government has declared Morsi’s Muslim Brotherhood group a terrorist organisation, as hundreds of its followers have been killed and thousands have been arrested.

“I am gravely concerned that

,” Carter said in the statement.

Al-Sisi will face leftist Hamdeen Sabahi in the election, but his win seems assured as he is riding a wave of nationalistic fervour. A Brotherhood-led coalition says it will boycott the election. Nearly 210,000 expatriates have cast their ballots in embassies and consulates around the world and voting will be extended for a fifth day, election commission head Abdel-Aziz Salman said Saturday.

Carter also called on Egypt’s next president to take immediate steps to foster dialogue and political accommodation, “to ensure that the full spectrum of Egyptian society can participate meaningfully in politics”.

The Carter Center observed Egypt’s parliamentary and presidential elections in 2012, which saw Morsi come to power as the country’s first freely elected president. However, the Atlanta-based non-profit organization did not send monitors for Egypt’s last two elections, both polls on the constitution. It cited the government’s late release of monitoring regulations as its reason for not monitoring the constitutional vote under Morsi.

The European Union announced on Saturday that its election observers only will observe polling stations in Cairo, after not being able to meet its own requirements to observe elsewhere.

As president, Carter oversaw negotiations in the late 1970s that led to Israel and Egypt signing longstanding peace accords following wars. The Carter Center, which he founded with his wife, has been monitoring Egypt closely since the 2011 revolt against Hosni Mubarak.