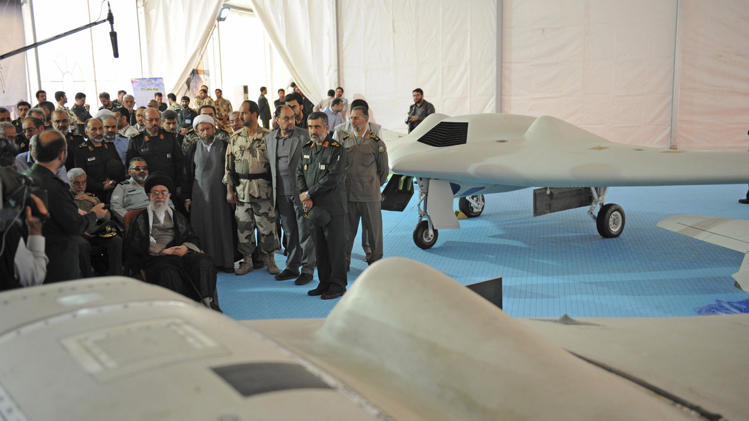 In this picture released by the official website of the office of the Iranian supreme leader, Supreme Leader Ayatollah Ali Khamenei, seated left, listens to an official during his visit at an aerospace exhibition in Tehran, Iran, Sunday, May 11, 2014. The exhibition revealed an advanced CIA spy drone, front, captured in 2011 by Iran, and its Iranian-made copy, back. Khamenei, during the exhibition Sunday, criticized the West for its demands Tehran restrict its missile power, the official IRNA news agency reported. (AP Photo/Office of the Iranian Supreme Leader)
Share:

By Patrick Hilsman, The Daily Beast

Iran has been providing Syria’s regime with drones — some of them inspired by American technology – and they’re already playing a significant role keeping Bashar Assad in power. On Sunday, Tehran announced it had replicated a top-of-the-line U.S. drone it claimed it captured in 2011, raising the possibility it will send still more sophisticated aerial robots into the skies over Damascus.

In some respects, this shouldn’t come as a surprise. Iran’s robust drone program dates back to the early 1980s, and it first tried to weaponize the birds some 30 years ago, long before American Predators and Reapers first soared aloft.

The Middle East was the first great proving ground for unmanned aerial vehicles, or UAVs, as they’re called. During the 1980s, Israel flew drones over Lebanon’s Bekaa Valley to spot Syrian artillery and anti-aircraft positions, allowing the Israeli Air Force to knock out the Syrian air defenses with minimal risks to its pilots. At about the same time, Iran began using drones to spy on Iraqi positions in its epic war against Saddam Hussein. It was during that bitter conflict that Iranian engineers crudely mounted Soviet rocket-propelled grenades on their drones and fired them at Iraqi troops.

Over the last decade, even as American drones grew fearsome and infamous, killing alleged terrorists and many civilians in Afghanistan, Pakistan and Yemen, the Iranians began expanding their own program dramatically.

According to Varun Vira, an expert at c4ads, a think tank in Washington D.C. that specializes in defense issues, Iran now has a couple of dozen airframes and platforms it can use. “In recent years,” says Vira, “the drone program appears to be maturing, judging from the number of new unveilings in 2012 to 2013, including variants of the Shahed, Azem, Mohajer, Hamaseh and Sarir drones, to name but a few.” Given the overwhelming support of Iran for the Damascus regime, it was probably inevitable that Tehran’s drones would go into action there. “They’ve been seen on several airbases in satellite imagery, including Damascus, Hama and Shayrat airbases,” says Vira.

In addition to the steady influx of Iranian military drones, civilian drones also have appeared on the Syrian battlefield. In November 2013 rebels released images of a DJI Phantom they claim to have brought down in the besieged city of Homs. These tiny quad-copters are available in hobby shops in the United States and are often seen filming sporting events or music videos when mounted with GoPro cameras.

The rebels claim the quad-copter was being used by government forces to spy on their positions. But given the fact that the Phantom was found intact and is far less capable than the military technology in the Syrian arsenal, it is possible that it was a rebel drone all along. Indeed it would make sense for rebels to invest in these miniature UAVs because a Phantom with a GoPro attached costs much less than the street value of an AK-47 assault rifle. According to Vira the DJIs can provide some basic “over the hill” intelligence, surveillance and reconnaissance capability for infantry, “but they’re far from what’s needed for persistent surveillance over combat areas, and they’re low-altitude and fairly easily shot down.”

The first evidence of Iranian drones in Syria appeared in early 2012, when opposition activists released video showing a Pahpad AB-3. The drones became known locally by the Arabic slang term wizwazi, and their presence was usually a good indicator of imminent shelling or airstrikes. There have since been numerous sightings of various models — in December 2013, the Al-Qaeda affiliate Jabhat al-Nusra shot down a small Yasir drone and displayed the wreckage on social media.

The Yasir drones are particularly interesting because Iran claims to have developed them by reverse engineering American technology captured in 2012. In this case, Iran says they developed their own model based on captured American ScanEagle mini UAVs, a claim Washington will not confirm, but which was widely reported in the media. When Tehran unveiled its own copycat Yasir drone, officials made a point of publicizing it with a press conference attended by a high-ranking military delegation from Russia. According to Vira, “Gauging Iran’s true UAV capabilities is very difficult,” but pictures of the crashed Yasir show that it appears to be quite similar in design, “so it is likely to have been at the very least inspired by the ScanEagle.”

The Yasir shoot-down provided solid evidence of advanced Iranian weaponry in Syria, as does recent footage of an Iranian Shahed-129 over Damascus. Iran has armed drones in its own arsenal, but so far only unarmed drones have appeared in Syria and their main purpose appears to be reconnaissance.

According to Vira, “It appears fairly clear that the Syrian Air Force suffered significant attrition, and that Iranian/Russian resupply of spare parts, jet fuel, technicians, etc., is what has kept them in the fight.” The Iranian drones “are important in providing relief to an overstretched [Syrian Air Force],” says Vira, thus “freeing up Syrian aircraft for combat roles.”

But “Iran likely has its own limits in terms of mission creep in Syria,” says Vira. In other words, the Islamic Republic does not want to be implicated in direct attacks by providing armed drones, but “given this backdrop, Iranian ISR help, no doubt, is much appreciated.”

Despite the expansion, improvement, and proliferation of Iran’s drone program, American technology remains far in advance.

Peter Singer, an expert on drones and author of Wired for War, says Iranian claims of reverse engineering are “plausible on the hardware side, but dubious on the full software side.” Singer says that despite being able to fly, Iranian technology cannot provide the same level of ISR support as its American counterparts and that reverse engineering is not enough to “shift the regional balance of power.”

There is, however, every indication that Iran keeps trying. In 2011, it captured a highly advanced “stealthy” American RQ-170 on its territory. The incident was embarrassing for Washington from the beginning, and has gotten moreso as Iran claims to have deciphered data captured from the UAV.

The jury is still out on whether Iranian engineers can effectively reverse engineer the RQ-170 Sentinel, but in 2011, Air force chief General Norton Schwartz said “there is a potential for reverse engineering clearly.” In a 2011 article for “Wired,” David Axe speculated that Iran would seek Chinese help in examining the RQ-170.

Iran now claims that it studied the American model to help create its first super-drone, the Fotros, and it seems quite eager for people to believe the new model is partially based on technology from the captured RQ-170. According to the Iranian ministry of defense, the new weapon is capable of delivering a 500-poun payload, can stay aloft for over 24 hours, and has a range of 2,000 miles. Extraordinary claims, to be sure, but Vira warns, “Iran has a history of hyping, exaggerating or even outright falsifying the capability of new military technology. The Fotros used in the unveiling appeared unfinished.”

Regardless of its true capacity and origin, the name “Fotros” appears to be a metaphor for the process of reverse engineering an American drone. In Shia mythology, Fotros was an angel who disobeyed God and was banished to Earth. After praying for forgiveness, Fotros was redeemed by the Imam Ali who gave him back his wings. On Sunday, Iranian state media reported that the Fotros would be flying soon. If so, it may only be a matter of time before we see those fallen angels in the skies over Syria.