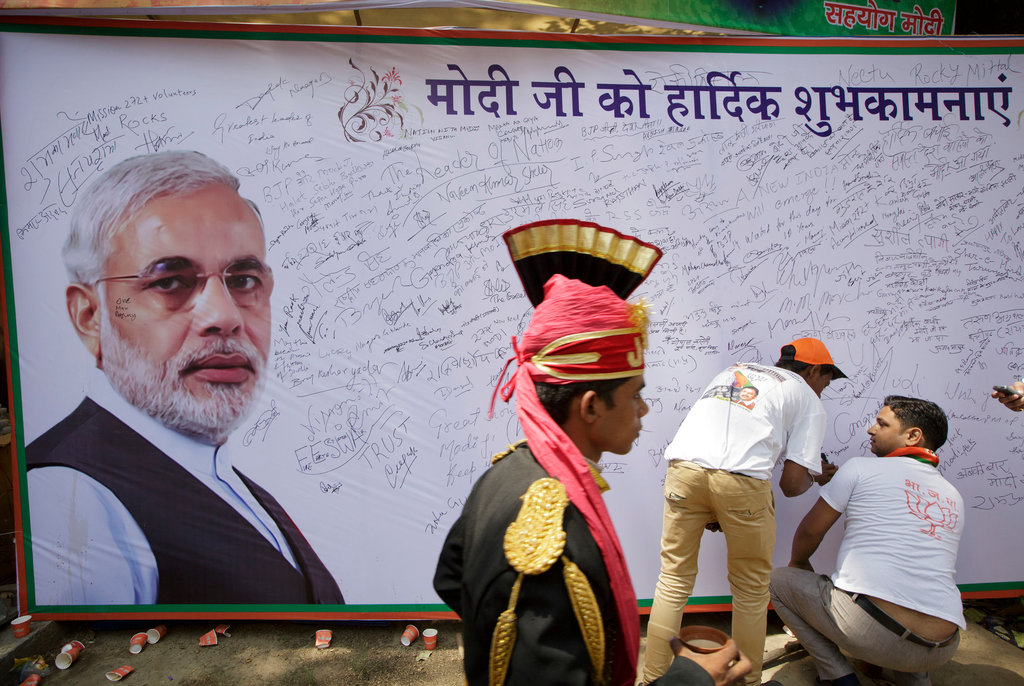 The Indian National Congress, which has headed India’s government for nearly all the country’s post-Independence history, conceded defeat to the opposition leader Narendra Modi on Friday, as voters rendered a crushing verdict on their country’s flagging economic growth and a drumbeat of corruption scandals.

Election officials had not yet finished counting the 550 million votes cast in the five-week general elections, but the contours of Congress’s defeat quickly became clear. Rahul Gandhi, the heir apparent to the political dynasty that forms the Congress party’s backbone, appeared headed for a narrow victory in his own home constituency, a stronghold he won by more than 300,000 votes in 2009.

In a humiliation for Mr. Gandhi, 43, a group of workers gathered around party headquarters in the capital city, chanting “Bring Priyanka, Save Congress,” a reference to his younger sister, who is seen as the more charismatic politician. Abhishek Manu Singhvi, a Congress spokesman, conceded that the party had been defeated.

“If the leads are correct, the results are conclusive,” he said, in a telephone interview. Another spokesman, Randeep Singh Surjewala, also confirmed the loss, saying “We humbly accept the verdict of the people of India. We shall continue to play with rigor the role of a constructive and meaningful opposition – the role that the people of India have assigned to us.”

After two hours of counting Mr. Modi’s Hindu nationalist party, the Bharatiya Janata Party, was assured of winning more than 272 seats, enough to form a government without brokering a coalition deal with any of India’s fractious regional leaders. If that happens, Mr. Modi will take power with the strongest mandate of any Indian leader since Rajiv Gandhi of the Indian National Congress took office in 1984, riding the wave of sympathy that followed the assassination of his mother, Indira Gandhi. 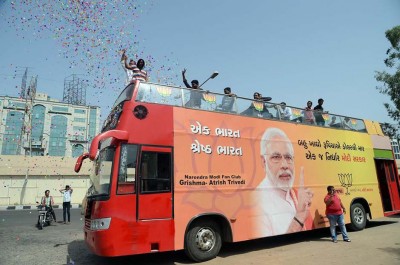 Drummers, stilt-walkers and women in colorful saris had converged at B.J.P. headquarters in Delhi, where party workers had laid out 100,000 laddoos, the ball-shaped sweets ubiquitous at Indian celebrations. Among the revelers was Surinder Singh Tiwana, 40, a lawyer.

“I can equate my jubilation today, probably, to my mother’s on the day I was born,” Mr. Tiwana said. “This is a huge change for our country, a change of guard. A billion plus people have announced their mandate in no uncertain terms. They have voted for a progressive, stable government.”

The elections came during a period of rapid transition in Indian society, as urbanization and economic growth break down generations-old voting patterns. With his conservative ideology and steely style of leadership, Mr. Modi, who came from a humble background and rose through the ranks of a Hindu nationalist group, will prove a stark departure from his predecessors in that office.

Mr. Modi is a regional leader — only the second ever to take the prime minister’s seat — known for maintaining tight control over the bureaucracy and political system in Gujarat, the state he has led for 13 years. His image as a stern, disciplined leader has attracted vast throngs of voters, who hope he will crack down on corruption, jump-start India’s flagging economy and create manufacturing jobs.

But it also worries many people. He is blamed by many of India’s Muslims for failing to stop bloody religious riots that raged through his home state in 2002, leaving more than 1,000 people dead. Others fear he will try to quash dissent and centralize authority in a capital that has long been dominated by the Indian National Congress and the liberal internationalists around it.

“He is very much the man who came from nowhere,” said Swapan Dasgupta, a senior journalist who supports Mr. Modi. “There is a great deal of nervousness that the old establishment which ruled, that it will somehow be threatened. That may not be a bad idea, in terms of encouraging a greater deal of social mobility.”

“I think over all we are going to see a churning process,” he added.

Last summer, when Mr. Modi’s campaigners insisted that the B.J.P. could win the 272 seats necessary to form a government, the ambition seemed far-fetched.

After a decade in power, Congress had succeeded in introducing a package of generous new welfare programs for poor and rural Indians, who still make up the majority of the electorate. Congress and its allies had a proven track record of campaigning in India’s villages, in contrast to the B.J.P., which has long been seen as a party of urban traders.

But Mr. Modi seemed to benefit from changes in the electorate. Nearly 100 million new voters were registered ahead of this vote, including a vast influx of young people, and turnout broke all previous records, hitting 66.4 percent.

Compared with their elders, these young voters were unmoved by the decade-old history of the Gujarat riots, which had prompted many Western governments, including the United States, to impose visa bans on Mr. Modi. They also proved far less emotionally bound to the Nehru-Gandhi dynasty, which has served as the backbone of the Congress party since India won its independence, surviving the wrenching assassinations of two of its members.

“These people are born after Indira Gandhi’s assassination,” he said. “For a lot of them, the 2002 riots are not even a faint blur. What is imprinted on their memory is five years of nongovernance, and a massive loss of white-collar jobs. Once you have gotten used to 7 percent growth, to go down to 4.5 is a real recession.”

The Congress-led government has often seemed rudderless in its second term.

Its prime minister, Manmohan Singh, a distinguished economist, was a barely audible figure on the national stage, and often appeared subordinated to the party’s president, Sonia Gandhi, who was setting the stage for her son, Rahul, to take over.

The party’s leaders responded slowly, if at all, to bursts of social media-driven street activism that coalesced around the issue of corruption, and after a brutal gang rape that shook Delhi in 2012. The party’s presumed prime ministerial candidate, Mr. Gandhi, was a stilted campaigner who always appeared reluctant to take the reins of the political dynasty. In the final stage of the campaign, he ceded the spotlight to his more charismatic sister, Priyanka.

In the end, Mr. Modi’s victory will be seen largely as a function of his opponents’ weakness, said the historian Ramachandra Guha.

“The context here is the opposition: His rival is an heir apparent who is a bad orator, unwilling to take administrative responsibility,” he said. Though Congress has, in the past, regularly returned to power after being voted out, Mr. Guha said he thought the dynasty’s younger generation might have trouble regrouping.

“The larger sociological shift is that Indian society is becoming more democratic and less feudal, less deferential to family privilege,” he said. “It’s possible that Rahul Gandhi and Priyanka Gandhi cannot revive Congress, because India has moved on.”