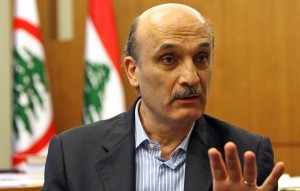 Lebanese Forces leader Samir Geagea lashed out on Thursday at the March 8 alliance, accusing it of “intentionally obstructing the presidential elections.”

“Some are stating that boycotting the parliamentary sessions to elect a president is a right guaranteed by the constitution but that’s not true,” Geagea said in a press conference held at his residence in Maarab.

“They are cheating the Lebanese people,” the Christian leader remarked.

He pointed out that “boycotting the sessions is an exceptional right during exceptional circumstances but cannot be used to obstruct the parliamentary sessions set to elect a new head of state.”

The presidential hopeful told reporters that he will not “compromise over his candidacy.”

Geagea said that the March 8 alliance is accusing the March 14 coalition of obstructing the sessions because it is holding onto his candidacy.

“It would be better if they support any candidate and result in loss through the ballots,” Geagea added.

The LF chief held the March 8 Christians responsible for the delay in electing a new president, saying: “We have no other choice but to continue our battle.”

He called on lawmakers to attend the sessions as “there is no intention to amend the constitution to renew President Michel Suleiman’s term despite our positive opinion of him.”

Any attempt to keep the president in power requires a constitutional amendment by the two-thirds majority of the 128-member parliament.

By law, if no president has been chosen by the last 10 days of the incumbent’s mandate, parliament cannot meet for legislative sessions except to elect a new president.

That means, starting on Thursday, legislative action will grind to a halt.

“We will not be able to agree on a single candidate that’s why voting must take place,” Geagea stressed.

He slammed attempts by the other political group to block the elections, which is seeking to push forward the election of its candidate or else vacuum will occur.

Thursday’s parliamentary session faced the similar fate of its precedents.

The first presidential elections session was held on April 23, but neither Geagea nor Democratic Gathering MP Henri Helou garnered the necessary 86 votes to emerge victorious.

Two other sessions were supposed to be held, but they failed over lack of quorum after a March 8 camp boycott on the ongoing disagreement over a candidate.