Over 40 dead after boat sinks off Tripoli 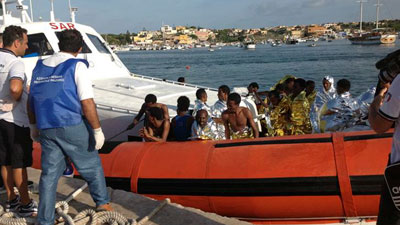 A boat carrying illegal migrants sank off the coast of Tripoli on Sunday, killing at least 40 people, the spokesman for Libya’s Interior Ministry told CNN.

Some 50 others were rescued, and an unspecified number remain missing, Rami Kaal said.

Kaal did not have information on the specific nationalities of the migrants on the vessel but said Libya is suffering greatly from the “huge number” of illegal migrants in his country.

According to the spokesman, most have come from sub-Saharan Africa, neighboring countries like Egypt and Tunisia and, more recently, more have come from Syria.

The migrants arrive to board boats headed to European shores, particularly Italy and Malta.
Kaal feels that the European countries have an obligation to help Libya deal with this “serious problem” but said, so far, they have done little.

According to Kaal, the flow of illegal migrants has contributed to the rise in crimes such as killings and armed robberies in Libya.

He referred CNN to the statements made by acting Interior Minister Salah Mazeq on Saturday. The minister threatened to “facilitate” the passage of migrants and “flood Europe” with them unless the countries stepped up and helped Libya.

“I warn the world, especially the European Union, unless they assume their responsibility … we warn that Libya could facilitate the passage of this flood (of illegal migrants) and fast,” Mazeq said. He went on to say Libya has paid the price; now it’s the EU’s turn to pay the price of combating the problem.

Libya’s porous southern borders have been a favorite launch pad for illegal migrants trying to reach Europe due to its proximity to countries like Malta and Italy. Since Libya’s revolution in 2011, the country has been struggling to deal with this growing phenomenon.

To give scope to the problem, Kaal told CNN last week more than 400 migrants were caught in one day as they tried to board vessels to Europe.

Asked how Europe can offer assistance, he offered the example of the delivery of boats for Libya’s coastguard from an unnamed European country that has been stalled for more than 18 months.

“The government also reaffirms it is continuing to cooperate with all concerned countries, especially Italy, in monitoring the borders to stem the flow of migrants. The Government renews its call to all countries to create development projects in the countries of origin in an effort to cut down on this phenomenon.”