Syrian regime takes back Homs, the former capital of the revolution 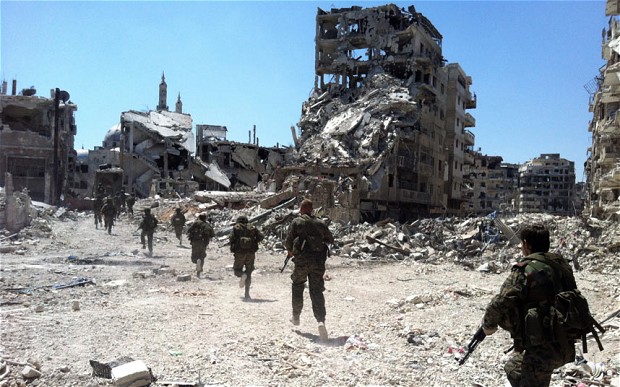 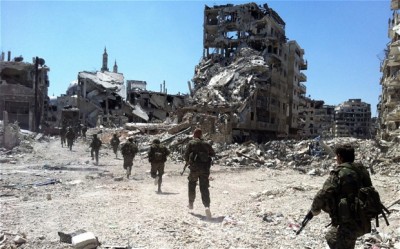 The last Syrian rebels left Homs’ Old City Friday under an evacuation deal that hands the government a symbolic victory, as civilians began trickling back in to find neighborhoods in rubble.

The pullout from the Old City leaves the rebels confined to a single district on the outskirts of the central city of Homs, once “the capital of the revolution” against President Bashar Assad.

As troops moved in to clear the Old City of explosives, hundreds of civilians began returning to see what remained of their homes in a Christian district within the area that has been under nearly daily bombardment during a two-year siege by Assad’s forces.

Many were shocked, with tears in their eyes, as they climbed over debris to inspect the ruins, said an Agence France Presse journalist at the scene.

The final convoy of rebels withdrew after a day-long delay blamed on fighters in northern Syria blocking an aid convoy destined for two pro-regime towns besieged by opposition fighters in Aleppo province.

The aid delivery had been pledged as part of an exchange for the safe passage of more than 2,000 people, mainly rebels, out of the Old City.

Homs Governor Talal al-Barazi said “we have completed the evacuation of armed men from the Old City of Homs,” referring to the withdrawal, which began Wednesday.

But seven buses carrying the last 250 rebels were stopped Thursday because Islamist fighters not involved in the deal blocked the pledged flow of food supplies into the Shiite towns of Nubol and Zahraa in Aleppo province, said the Syrian Observatory for Human Rights.

Barazi said negotiations were well advanced for the rebels to also leave that neighborhood, Waer, in the coming weeks.

The governor said the fighters and some of the civilians evacuated with them had been bussed out to the opposition-held town of Dar al-Kabira, 20 kilometers (13 miles) north of Homs.

State news agency SANA quoted the governor as saying government troops had entered the Old City on Friday and began clearing it of explosives planted by the rebels.

Jaqueline Fawwaz, a 30-year-old woman returning to the Old City, said “I had seen on Facebook that my home had been destroyed, but I couldn’t believe it. I wanted to see it with my own eyes.”

A 45-year-old who returned with her husband and did not identify herself said: “I came to check on my house, but I couldn’t find it. I didn’t find a roof, I didn’t find walls. I only found this coffee cup, which I will take with me as a souvenir.”

This is not the first deal between the government and the rebels, as a number of ceasefires have been agreed on the outskirts of Damascus.

But it is the first time that rebel fighters have withdrawn from an area they controlled after an accord.

It is also the first time Syria’s rebels and security agencies sign a deal after negotiations supervised by the ambassador of key Damascus ally Iran.

The government allowed the remaining rebels in Homs to pull out with their personal weapons in return for the release of 40 Alawite women and children, an Iranian woman and 30 soldiers held hostage by rebels elsewhere in Syria, a rebel spokesman said.

The Observatory said all the hostages had been released by Thursday afternoon.

Abu Wissam, a rebel fighter being evacuated from the city center, bemoaned the outside interests now at play in a conflict that began as an Arab Spring-inspired protest movement.

“Now, everyone is moved like pawns in a chess game” between regional and international powers, he told AFP.

There have been many sieges imposed by both sides in the three-year-old conflict but that of the Old City of Homs has been by the far longest.

Some 2,200 people were killed as near daily bombardment reduced the area to ruins.

The rebel pullout comes less than a month before a controversial presidential election, described as a farce by Western governments and the opposition, that is expected to return Assad to office.

In Washington, U.S. Secretary of State John Kerry stood side-by-side with Syrian opposition chief Ahmad Jarba in a public show of support on Thursday, but made no mention of the rebels’ plea for heavy weapons to help end the war.

Jarba, head of the Syrian National Coalition, has said he would ask the U.S. administration for anti-aircraft weapons to battle daily barrel bombings unleashed by Assad’s forces and help change the balance militarily on the ground.

U.S. officials privately acknowledged he made the request in talks with Kerry at the State Department, but they refused to be drawn on the response.

State Department spokeswoman Jen Psaki meanwhile pointed to a series of new U.S. measures including an extra $27 million in non-lethal aid for the rebels on the ground, as well as Treasury sanctions against Syrian officials.

“I have nothing to announce in terms of any change in our position,” said State Department Jen Psaki, referring to the long-standing policy of the U.S. administration to provide only non-lethal military support such as communications equipment, body armor and night-vision goggles.

“I’m not going to outline that or detail that from here, but we continue to consider a range of options.”

It is understood that Jarba will also meet with U.S. President Barack Obama during his eight-day trip to the US which ends on May 14.

Jarba “understands better than anybody, the stakes and the struggle and the fight against extremism,” Kerry said as he welcomed him to the State Department.

“We are committed to do our part to support the moderate opposition in its efforts to provide a legitimate voice to the aspirations and hopes of the Syrian people,” he added.

And he praised Jarba and the SNC for building “an inclusive and moderate institution” committed “to the protection of all people, all minorities, all rights within Syria.”

Speaking in Arabic through a translator, Jarba thanked Kerry for Washington’s support “for the struggle of the Syrian people, for freedom and democracy, and also to lift the injustice and fight oppression and dictatorship that Bashar Assad is engaging in. ”

But he stressed the Syrian people were looking “to the superpower and country that plays a leading role in the world.”