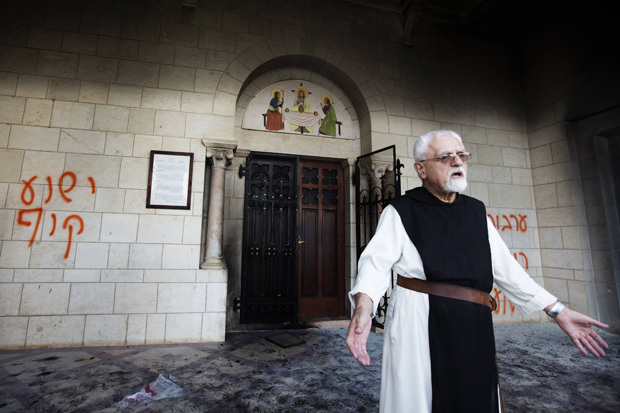 A Trappist monk gestures between graffiti reading in Hebrew, “Jesus monkey” (L) and “mutual guarantee, Ramat Migron and Maoz Ester” (West Bank settlements), which was sprayed on the wall of the Christian Catholic Latrun monastery between Jerusalem and Tel Aviv
Share:

The Roman Catholic official in charge of the Vatican’s properties in the Holy Land on Thursday urged Israel to safeguard Christian holy sites, following a number of vandalism attacks on churches and monasteries ahead of a visit by Pope Francis.

Vandals have recently scribbled anti-Arab and anti-Christian graffiti on several Christian holy sites and properties, including an attack this week on the Vatican’s Notre Dame Center in Jerusalem.

Israel’s Shin Bet internal security agency says it fears there could be similar attacks as the pope’s visit approaches at the end of the month. He is scheduled to visit Jordan, the West Bank and Israel from May 24 to 26.

The “Custody of the Holy Land” issued a statement expressing concern about the attacks and said the uptick in violence appeared to be connected to the visit. It called on Israel to “work urgently against extremist elements” to ensure peace and safeguard Christian holy places.

In recent years, vandals believed to be Jewish extremists have attacked mosques, Christian holy sites, Arab properties and even Israeli military bases and vehicles in Israel and the West Bank to protest what they perceive to be the Israeli government’s pro-Palestinian policies. The attacks are known as “price tag.”

Rosenfeld said police have “stepped up” patrols and surveillance across the country, and that thousands of police officers would be deployed during the pope’s visit to ensure it goes smoothly.