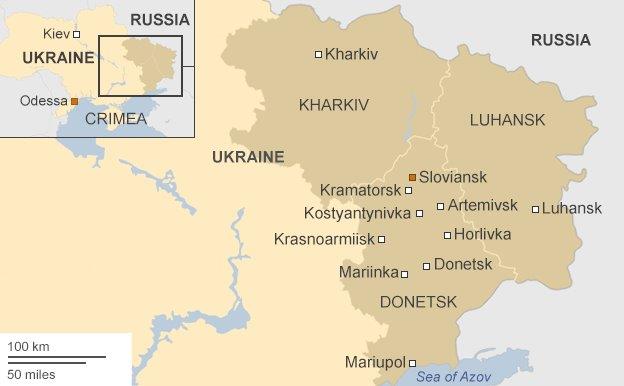 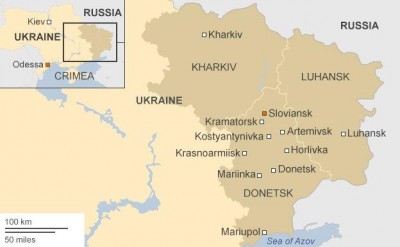 Russia’s President Vladimir Putin says Ukraine’s presidential election on 25 May is a step “in the right direction”.

But he said the vote would decide nothing unless the rights of “all citizens” were protected.

Ukraine’s PM described as “hot air” Mr Putin’s call for an independence referendum, planned this weekend by separatists in the east, to be delayed.

Mr Putin also said that Russia had pulled back its troops from the border, as tension remains high.

Moscow has said it will protect the rights of the largely Russian-speaking people in the south and east against what it calls an undemocratic government in Kiev.

Kiev has rejected pro-Russian activists’ demands for greater autonomy, fearing it could lead to the break-up of the country, and has sent in troops in recent weeks to seize back official buildings occupied by rebels.

Mr Putin suggested that Kiev’s military operation in eastern Ukraine could be halted in exchange for a postponement of the referendum scheduled to take place in several areas on Sunday.

Earlier on Wednesday, pro-Russian separatists took back the city hall in the southern port of Mariupol after it was briefly taken over by Ukrainian government forces.

President Putin made his suggestion after talks in Moscow with Didier Burkhalter, the Swiss president and current chairman of the Organization for Security and Co-operation in Europe (OSCE).

The organizers of the referendum in Donetsk – who have prepared some three million ballot papers – said they would meet on Friday to discuss his request.

On the forthcoming presidential elections, Mr Putin said: “I would like to stress that… while they are a move in the right direction, [they] will not decide anything if all the citizens of Ukraine fail to understand how their rights are protected after the elections are held.”

He also said he had pulled back Russian forces from the border with Ukraine to “places of regular exercises, at training grounds”, although Nato said it had “not seen any significant change to the disposition of troops along the border”.

The BBC’s Steve Rosenberg in Moscow says President Putin is not known for performing U-turns, but his latest comments on Ukraine do suggest a shift in the Kremlin’s position – which will be treated with some caution by the West.

For a brief time on Wednesday, Ukraine’s government forces had control of the city hall in Mariupol, before it was re-seized by pro-Russian activists.

In that time, they arrested 16 activists and took them to the city’s police station, leading to a violent confrontation between the detainees’ friends and relatives and the security forces who fired shots into the air.

In other developments on Wednesday:

– The government has asked Ukraine’s football league to hold remaining matches in the season without spectators and for those in the Donetsk, Luhansk, Odessa and Kharkiv regions to be moved to other areas.

– Russia’s education ministry has ruled that the government’s reasoning for annexing Crimea must be included on the curriculum.

Tensions have been high since Kremlin-backed forces seized control of Crimea, which then voted to join Russia in a March referendum that Kiev and the West deemed to be illegal.

That followed the ousting of Ukraine’s pro-Russian President Viktor Yanukovych in February by pro-Western protesters.