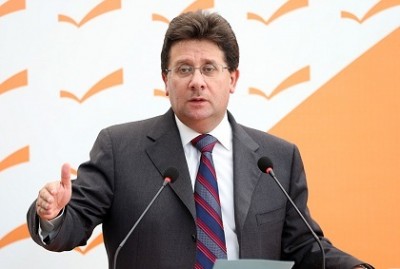 The Change and Reform bloc on Tuesday confirmed on Tuesday that the Free Patriotic Movement MPs will boycott the Wednesday parliamentary session set for electing a new president to replace Michel Suleiman whose term ends on May 25th.

“We do not believe in vacuum in the presidency , and it is not in our considerations,” MP Ibrahim Kanaan said after the bloc’s weekly meeting.

“But we are also against folkloric parliamentary sessions,” he added.

Kanaan said the bloc wants a president who is “strong in their community, but who is also capable of uniting the Lebanese people.”

“It is our duty to preserve this choice,” he stated.

On Wednesday the second round of presidential elections is scheduled to be held, because the MPs failed last week to elect a new head of state , since none of the candidates was able to secure the needed two-thirds of votes. Furthermore , as soon as the voting in first session ended the March 8 MPs left the parliament before the vote count. This prompted Speaker Nabih Berri to set April 30 as the date for the second session.

On analysts commented on Kanaan’s comment be saying”: “If FPM does not believe in vacuum , let its leader MP Michel Aoun declare his candidacy and announce his program and let the MPs vote”.