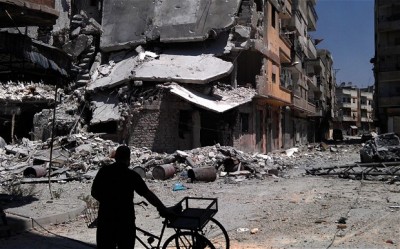 The attacks in Damascus and Homs heightened fears of an escalation ahead of the contentious June 3 vote and showed that despite a series of battlefield setbacks, the rebels remain capable of hitting the government and its core of support.

Now in its fourth year, Syria’s conflict has left the country a chaotic tableau of localized battles whose front lines shift back and forth, but have little impact on the wider war. The map of control has remained largely unaltered: Assad holds sway in Damascus and the corridor that runs up to the Mediterranean coast, while the rebels control most of the north along the Turkish border and the Kurdish minority controls a corner in the northeast.

But the rebels are feeling squeezed in the capital, Damascus, and in Homs, Syria’s third-largest city and an opposition stronghold since the beginning of the uprising against Assad. The government has taken a two-pronged approach to crushing resistance in both areas: suffocating blockades that eventually force cease-fires and a fierce offensive along the Lebanese frontier that has severely restricted the flow of weapons and fighters along cross-border supply lines.

In Homs, the rebels are growing desperate as government forces ramp up their assault on the last remaining pockets of opposition in the Old City. Among the hundreds of fighters still holding out in besieged districts, some talk of surrender while others have lashed out at the government with suicide car bombings in pro-Assad districts.

Tuesday’s double car bombing struck near the pro-government Zahra and Abbasiyeh neighborhoods — an area predominantly inhabited by Christians and members of Assad’s Alawite sect. At least 40 people were killed and another 116 wounded, the official SANA news agency said. The Britain-based Syrian Observatory for Human Rights also put the death toll at 40 and said more than 80 were wounded.

The explosions struck 10 minutes apart and 150 yards (meters) from each other on a busy residential and commercial thoroughfare.

“When I arrived at the scene, fire and smoke and medics were still carrying away the wounded,” said one resident, who declined to give his name for fear of reprisals. He said homes and shops were heavily damaged in the blast, which also set several cars on fire.

In Damascus, several mortar shells slammed into a school in the predominantly Shiite neighborhood of Shaghour, killing 14 people and wounding 86, the state news agency reported. The Observatory said 19 people were killed, including 14 children.

It was one of the deadliest mortar attacks on central Damascus since the conflict began in March 2011.

In footage of the aftermath broadcast on Syria’s pro-government Al-Ikhbariya TV, blood and glass littered the floor. Shoes were scattered about, along with a cap, a religious book and other belongings. One body was laid out on the ground and covered with a blanket. Two bloodied feet protruded from under the cloth.

Rebels frequently fire mortars into government-controlled districts in central Damascus from opposition-held suburbs, many of which have been under a crippling government blockade for months, with no food and medicine allowed to reach civilians trapped inside.

The government move to pacify Homs and shore up its hold on the Damascus suburbs comes ahead of the June 3 presidential election, which Assad is widely expected to win. The vote is widely perceived as an attempt to give Assad a veneer of electoral legitimacy even as the country remains engulfed in a bloody rebellion against his rule. The opposition and its Western allies have denounced holding elections now as a farce.

Samantha Power, the U.S. ambassador to the United Nations, on Tuesday dismissed the idea that the vote could be credible or fair.

“Although we all look forward to the day when meaningful balloting can take place in Syria, that day is not June 3, nor anytime in the near future,” Power said.

Meanwhile, the international chemical weapons watchdog announced it was sending a team to investigate recent allegations about the use of chlorine gas in the war.

The Organization for the Prohibition of Chemical Weapons said the Syrian government has agreed to the mission, and will provide security in areas under its control.

While chlorine was first deployed militarily in World War I, it is no longer officially considered a warfare agent and was not among the chemicals declared by Syria when it joined the chemical weapons treaty.

However, a spokesman for the chemical weapons watchdog, Michael Luhan, noted that “”using any toxic chemical to kill or hurt people would be a violation of the convention.”