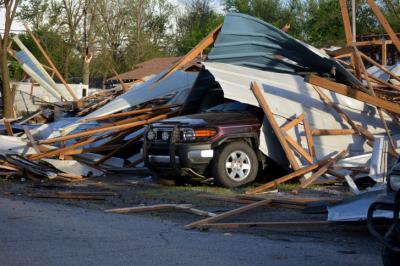 Emergency officials were hoping to get a better assessment of the devastation following daybreak Monday morning after a powerful storm system spawned multiple tornadoes across the central and southern U.S. on Sunday, killing at least 17 people in Arkansas and Oklahoma, authorities said.

In Arkansas, a large tornado roared through the center of the state, touching down around 7 p.m. local time and lashing the cities of Mayflower and Vilonia as it traveled just northeast of Little Rock, the state’s capital, according to the National Weather Service.

Emergency responders were still trying to confirm casualties and expected a more accurate survey of damage Monday morning. But the Arkansas Department of Emergency Management reported at least 16 dead as of early Monday morning, including 10 in Faulkner County, five in Pulaski County and one in White County.

Local television footage in Arkansas showed homes and trailers reduced to their foundations, trees shorn of all limbs and other severe damage in Mayflower, a city of about 2,300 people, and Vilonia, a city of about 4,100.

Vilonia had been hit by a tornado almost exactly three years earlier–on April 25, 2011–that killed four people and damaged numerous buildings, authorities said at the time.

Arkansas Gov. Mike Beebe, a Democrat, went to an emergency command center to get updates on the situation Sunday evening. Television stations in Arkansas quoted eyewitnesses saying the tornado that moved through the area appeared to be as big as a half-mile wide, though its size and strength weren’t immediately estimated by U.S. weather officials.

“It’s been a truly awful night for many families, neighborhoods and communities, but Arkansans always step up to help each other recover,” Mr. Beebe’s Twitter account stated, adding that the governor planned to visit the damaged towns in the morning.

The Arkansas tornado, the worst of the season so far, was one of several that swirled through parts of the country on Sunday as a dangerous thunderstorm system passed through the central U.S. The peak tornado season in the central U.S. is March through May, though the storms can occur beyond that interval.

Entergy Arkansas said roughly 16,000 of the utility’s customers were without electricity Monday morning, down from a peak of about 35,000 Sunday night, and that it was sending more crews into the area Monday to restore service.

Another tornado earlier Sunday evening hit Quapaw, Okla., killing one person and injuring six others in the town of about 900 near the Kansas state line, Ottawa County sheriff’s officials said.

The National Weather Service projected the storm system would create the potential for additional tornadoes, damaging winds and hail as it moved into the southeast on Monday, with potentially extreme weather possible in Mississippi, Alabama, Tennessee and Louisiana.