Wife of US Doctor slain in Afghan forgives gunman 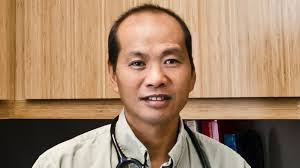 The wife of an American doctor who was one of three U.S. doctors gunned down today in an Afghan hospital emerged today to say that she forgave the man who shot her husband.

The doctor was identified as Jerry Umanos, a pediatrician who had given up his Chicago practice to spend the last nine years caring for children in Afghanistan.

Umanos’ wife, Jan Schuitema Umanos, read a statement today with their son Ben by her side. The couple’s two other children were not in Chicago, she said.

“I’d like to start by saying our family has suffered a great loss,” Mrs. Umanos said, but added, “We are also aching for the loss of the other families… as well as the loss that the Afghan people have experienced. My heart aches for the Afghan people.”

“I know Jerry would also like everybody to know about his love for the Afghan people,” she said. “And we don’t hold any ill will towards the Afghan people in general or even the gunman who did this.”

Mrs. Umanos, who said she also spent several years working in Afghanistan, made it clear that her husband was a religious man.

“Jerry always wanted us to serve underserved populations and Afghanistan was just one of them. He always had a desire to be the hands and feet of Christ,” she said.

Umanos practiced medicine at Lawndale Christian Health Center in Chicago for 16 years, becoming a beloved staff member at the hospital. There he treated many staff members’ children as their pediatrician, the hospital’s chief clinical officer said today.

“Today we have lost a very, very dear friend and devoted colleague,” Dr. Bruce Rowell, chief clinical officer of Lawndale, said at a press conference this morning. “Dr. Umanos has been a pediatrician for over 25 years and he was the pediatrician for many of our own children.”

Umanos left Lawndale in 2005 when he decided to become a staff doctor for a charity hospital opening in Kabul, Afghanistan. That hospital, CURE International, specialized in caring for women and children and was the site this morning of the deadly attack.

According to police, an Afghan security guard who worked at the hospital opened fire on a group that included Umanos. Umanos was killed along with an American father and son whose names have not been released. The pair was visiting Umanos. A female nurse who was with the group was also injured.

Rowell said that Umanos was teaching medical residents and seeing patients at CURE, part of a network of charity-run hospitals based in Pennsylvania.

“Early this morning we learned the news of his death in Afghanistan. For nearly a decade, he has volunteered to train residents and see patients in Afghanistan. This is a great loss for his family, for those of us he worked with, and for the people of Afghanistan,” Rowell said.

Staff members at the hospital cried and hugged one another after the press conference.

Umanos completed medical school at Wayne State University and residency at the Children’s Hospital of Michigan, according to ABC News station WLS in Chicago.

The shooting at Cure International Hospital in western Kabul was the third attack on foreign civilians in Afghanistan’s capital this year. CURE hospital is one of the most prominent in Kabul, partly because of its specialized offerings for women and children, including obstetrics and gynecology and surgery.