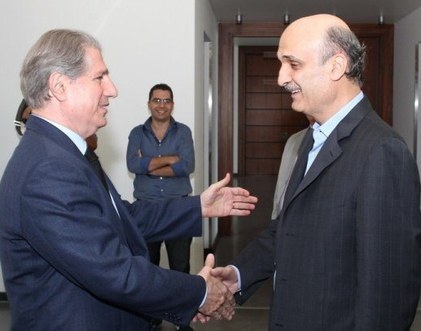 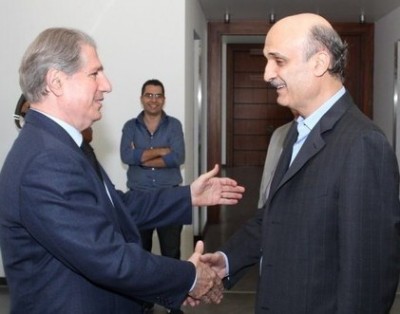 Phalange Party leader and former Lebanese president Amin Gemayel condemned Wednesday the move of an unidentified MP who had cast a ballot carrying his name during the first round of the presidential election, confirming that all of his party’s MPs voted for Lebanese Forces chief Samir Geagea, who remains the party’s candidate.

“The five MPs of Kataeb voted for Dr. Samir Geagea,” Gemayel said in an interview with LBCI television Wednesday evening.

“I don’t know who cast the ballot carrying my name and for what motive, and although the voting was confidential, our MPs respected the decision of Phalange’s politburo on voting for Geagea,” Gemayel added.

“Had it been one of our MPs, all of them would’ve done the same thing,” Gemayel said in response to a question, describing the behavior of the unknown MP as a “suspicious act.”

“I would have preferred if everyone respected certain ethics instead of casting ballots in this manner,” Gemayel said, noting that the move “does not honor the one who did it nor the parliamentary democratic course that we pride ourselves with.”

Citing unconfirmed reports, al-Manar TV had earlier reported that Phalange MP Samer Saade “was the one who voted for Gemayel.” However, Phalange sources dismissed the reports in remarks to OTV.

LBCI television said there is speculation that Future Movement bloc MP Mohammed Kabbara is the lawmaker who voted for Gemayel, despite the movement’s official decision to endorse Geagea’s candidacy.

Asked about the upcoming electoral sessions, Gemayel said the negotiations in the March 14 coalition will take place “according to the electoral course.”

“We will take the decisions that can achieve our goals and this is why I’m not in the race at the moment, although my nomination has been on the table since the very beginning,” Gemayel said.

“But at the moment, our candidate is Dr. Geagea,” he stressed.

According to observers Speaker Nabih Berri called in a hurry for a second electoral session for fear that if a second round was held on Wednesday Geagea could possibly muster the required 65 votes to win. Most of March 8 MPs left the parliament as soon as the ballot counting started.

124 MPs out of 128 attended the parliament session. The MPs who did not attend the session are former PM Saad Hariri, Oqab Saqr, Elie Aoun and Khaled al-Daher.

“There is a party in Lebanon that behaves as if it does not belong to this country,” Geagea said following the parliament session, that was adjourned until April 30th.