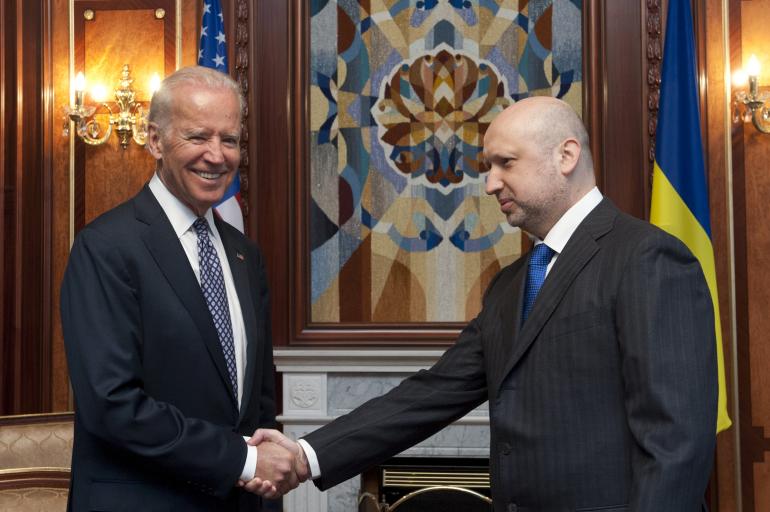 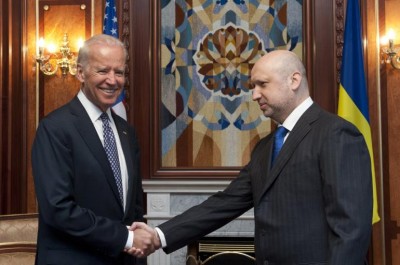 Hundreds of U.S. troops are headed for maneuvers in Eastern Europe through year’s end, the Pentagon announced, new deployments intended to reassure allies on Russia’s borders as violence took a sinister turn Tuesday in embattled Ukraine.

Vice President Joe Biden, in a visit to Kiev, warned Russia to pull back its troops and abide by last week’s international agreement or face the certainty of swift new sanctions. Mr. Biden also urged Ukraine’s leaders to adhere to democratic principles and respect cultural differences, reassuring them, “You will not walk this road alone.” (Read the latest updates.)

Despite Washington’s efforts, tensions flared as Kiev accused pro-Russian separatists of torturing and killing two people and of shooting at one of its military planes, prompting a call by the country’s interim president for a resumption of what he termed counterterrorism actions to uproot militants.

The Kremlin didn’t comment on the developments but has complained that Western military moves only serve to raise tension in the region.
Mr. Biden, who met in Kiev with Prime Minister Arseniy Yatsenyuk and other Ukrainian officials, said the U.S. won’t allow last week’s Geneva deal, intended to immediately begin easing tensions, to instead become “an open-ended process.”

“It is time for Russia to stop talking and start acting—act on the commitments they made,” Mr. Biden said. “Time is short in which to make progress.”

In Washington, Secretary of State John Kerry reinforced the message in a call to his Russian counterpart, Sergei Lavrov, expressing what the State Department said was “deep concern over the lack of positive Russian steps to de-escalate.”
Meanwhile, U.S. defense officials described plans to send 600 troops to four North Atlantic Treaty Organization member countries for exercises close to Russia.

Vice President Joe Biden visited Ukraine in a show of solidarity Tuesday. The United States is revealing a more solidified plan to help the government by offering aid and loans just before its election in May. However much larger questions about the stability of the Ukrainian economy persist.

The move is latest in a series of relatively small deployments this year to showcase the U.S. commitment to European defense. The U.S. previously has sent F-16s to Poland and Romania and F-15s to Lithuania, as well as assigned small groups of Marines to train in Romania and Latvia.

The deployments have fallen well short of demands by some members of Congress and Eastern European allies for a larger, more-permanent buildup of American forces in Europe, and for the shipment of arms to Kiev.

Republicans, while not proposing large-scale U.S. military action, have loudly criticized the Obama administration for failing to check Mr. Putin’s advances and have argued the White House policy on Russia has appeared weak. Sen. John McCain(R., Ariz.), during an MSNBC television appearance Tuesday, ridiculed Mr. Biden’s warning to Russia that time for adhering to the Geneva agreement is running out. “Or else what?” Mr. McCain asked.

“By rearranging U.S. forces already deployed in Europe, the President is doing something, however incremental, to reassure our allies,” he said. “It might have more deterrent value if he included the Ukranian military in the exercises.”

Privately, Pentagon officials dismiss the likelihood of a larger or permanent buildup of forces in Europe, but say they would consider stepping up the tempo of force rotations temporarily if Moscow doesn’t move to de-escalate the Ukrainian crisis.

The new U.S. deployments would stand little chance of countering Russian forces in a head-to-head military engagement, but defense officials said even small deployments would provide a deterrent to Russia. American forces in any array represent a physical reminder of U.S. treaty obligations to defend Poland and the Baltic states, the officials said.

For now, the exercises won’t involve Ukraine, which isn’t a NATO member. The U.S. Army is planning to continue an annual NATO exercise in Ukraine this summer, called Rapid Trident. On Tuesday, Adm. Kirby said that planning is continuing.

In Kiev, interim President Oleksandr Turchynov called for a renewal of the government’s stalled military operation against pro-Russian forces that have taken over several cities in eastern Ukraine.

Arizona Sen. John McCain talks with WSJ’s Sara Murray about the situation in Ukraine, including calling for the U.S. to arm the Ukrainian military as Russian forces showed little sign of retreating from the Ukrainian border. Photo: Getty Images.

His call was prompted in part by the discovery of two bodies in Slovyansk, which has emerged as a paramilitary hub of the separatists. One of the two dead men was apparently a local member of the president’s political party; both had apparently been “brutally tortured” before being killed, Mr. Turchynov said.

“The terrorists, who have taken the whole region hostage, have crossed the line when they started to torture and kill Ukraine patriots,” he said.

The local politician, Volodymyr Rybak, had disappeared days ago when a car pulled up alongside him as he was walking down the street of his hometown of Horlivka, near Slovyansk, according to a local press report. The identity of the other victim wasn’t immediately known.

Vyacheslav Ponomaryov, the separatist-appointed mayor of Slovyansk, said the corpse found in a river was possibly that of Mr. Rybak, but denied any rebel role in his death. He blamed Ukrainian nationalists for the killing, while citing no evidence.

Mr. Rybak had vehemently opposed the pro-Russian secessionist activities in Horlivka, where he served as a deputy in the city council. Just before he disappeared, he had tried to remove the separatist flag from the occupied city council building there, according to Gorlovka.ua, a local news website.

Separately, the Ukraine defense ministry said one of its planes, an Antonov-30, was shot at from the ground during a reconnaissance flight over Slovyansk. The ministry said the plane was hit by several bullets but landed safely.

In addition, there were reports that an American video journalist, Simon Ostrovsky of Vice News, had been detained by the separatists in Slovyansk.

The local leader, Mr. Ponomaryov, said that as of Tuesday night, Mr. Ostrovsky was at the militia-seized, state-security headquarters in Slovyansk “preparing a report.” Vice News said it was working with the State Department and other authorities to secure his safety.

In recent days, separatist gunmen in Slovyansk have detained about eight people, including a female activist from Kiev. Most of them are being held at the heavily guarded state-security headquarters. Separatist leaders here have also been threatening journalists at news conferences and warning them of consequences for what they deem to be inaccurate reporting.

The Organization for Security and Cooperation in Europe, which has been tasked with monitoring the Geneva deal, expressed “deep concern” about the safety of journalistsin eastern Ukraine and called for Mr. Ostrovsky’s immediate release.

On Tuesday, the separatists held a memorial service for three men who had been killed in a shootout Sunday at a checkpoint near Slovyansk. Separatists again blamed Ukrainian nationalists for that attack, but authorities in Kiev, and the nationalist group in question, Pravy Sektor or Right Sector, disavowed any role and accused the separatists of fabricating evidence.

Slovyansk’s previous mayor, Nelya Shtepa, who initially welcomed the militants when they arrived earlier this month, then switched sides and dropped from public view, re-emerged Tuesday on Russian television voicing support for the pro-Russian militants and showing off her office and shoe collection.

The acting president accused Russia of giving the separatists its “full support and indulgence,” and said Ukrainian security forces should relaunch the operation begun last week, but suspended after the Geneva deal, “to protect Ukrainian citizens living in eastern Ukraine from the terrorists.”

Previous attempts by the central government to retake separatist-held cities in the region were unsuccessful, however.

Mr. Biden’s visit to Kiev comes as U.S. officials have expressed concern that Moscow has failed to abide by last week’s Geneva agreement, including vacating pro-Russian forces from government buildings.

Mr. Biden said that Ukraine had held up its end of the agreement, including by offering amnesty to pro-Russia forces if they abandon the occupied public buildings in the east.

The U.S. is preparing a new round of sanctions against Russia in response that could be enacted by the end of the week.

In Brussels, several diplomats said Tuesday that the European Union has suspended its moves for any new sanctions to gauge the impact of last week’s Geneva deal. However, they said the bloc was ready to add 15 Russian and Crimean officials to its sanctions list if the Geneva deal fails.
Mr. Biden, in his talks with Ukrainian officials, stressed the need for national unity at a time when Russia is “trying to pull Ukraine apart.”

“Ukraine is in a struggle for its very future,” Mr. Biden said, insisting it remain one country. “No nation has the right to simply grab land from another nation, and we will never recognize Russia’s illegal annexation of Crimea.”

Mr. Biden said Ukraine’s elections late next month may be the most important in the country’s history and urged government officials to eradicate corruption.

The pressure to adopt critical constitutional changes came as the U.S. announced a new, $50 million aid package to Ukraine, including roughly $11 million to assist in the country’s May 25 elections.

The U.S. military exercises are separate. While the initial one will last about a month, the U.S. intends to replace the 150-troop companies with similar units to maintain a presence for the rest of the year, Adm. Kirby said.

“What we’re after here is a persistent presence, a persistent rotational presence in these exercises,” Adm. Kirby said. “We will rotate fresh troops in for more exercises.”

Speaking to Ukrainian lawmakers in Kiev, Mr. Biden stressed the need for the country to create a trustworthy judicial system and move toward energy diversity, instead of relying so heavily on Russian natural gas imports.

“You have to fight the cancer of corruption that is endemic in your system right now,” Mr. Biden said.

His 24-hour visit to Kiev was largely intended to send a signal to Russia of U.S. support for Ukraine ahead of its elections.