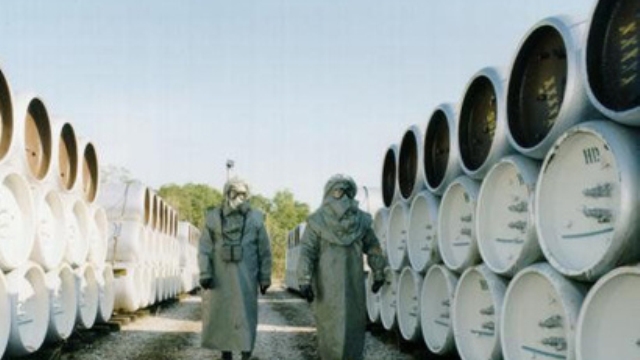 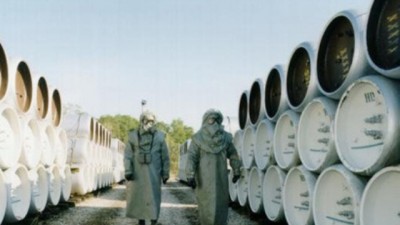 BEIRUT, Lebanon – Chlorine gas attacks in Syria this month, if proven, expose a major loophole in an international deal to remove chemical weapons from the war-torn country and suggest chemical warfare could persist after the removal operation has finished.

President Bashar al-Assad agreed with the United States and Russia to dispose of his chemical weapons – an arsenal that Damascus had never previously formally acknowledged – after hundreds of people were killed in a sarin gas attack on the outskirts of the capital last August.

Washington and its Western allies said it was Assad’s forces who unleashed the nerve agent, in the world’s worst chemical attack in a quarter-century. The government blamed the rebel side in Syria’s civil war, which is now in its fourth year.

Syria has vowed to hand over or destroy its entire arsenal by the end of this week, but still has roughly 14 percent of the chemicals it declared to the Organisation for the Prohibition of Chemical Weapons (OPCW).

In addition, chlorine gas that was never included on the list submitted to the OPCW is now allegedly being used on the battlefield, leading some countries to consider requesting an investigation, possibly through the United Nations.

Attacks this month in several areas of the country share characteristics that have led analysts to believe that there is a coordinated chlorine campaign, with growing evidence that it is the government side dropping the bombs.

U.S. State Department spokeswoman Jen Psaki said on Monday that Washington had indications that chlorine was probably used by government forces in Syria.

“We are examining allegations that the government was responsible,” she said. “Obviously there needs to be an investigation of what’s happened here.”

In the rebel-held village of Kfar Zeita in the central province of Hama, 125 miles (200 km) north of Damascus, opposition activists uploaded video of people choking and being fed oxygen following what they said were bombs dropped from helicopters on April 11 and 12.

Reuters could not verify the authenticity of the videos, and activists regularly make similar claims, but further footage of canisters provided an indication of what had happened.

One of the canisters had only partially exploded, and the marking CL2 was written along its side. CL2 is the symbol for chlorine gas. Also visible was “Norinco” – China’s biggest arms maker.

Since April 11, there have been repeated attacks on Kfar Zeita and also on the town of Al-Tamana’a in north west Idlib on Friday that shared the same characteristics.

If inhaled, chlorine gas – a deadly agent widely used in World War One – turns to hydrochloric acid in the lungs, which can lead to internal burning and drowning through a reactionary release of water in the lungs.

“The evidence is pretty compelling,” he said.

Amy Smithson, a leading American chemical weapons expert at the Monterey Institute, said that unless tests are run, it is not certain that chlorine was used or some similar agent.

“Once the Syrian government gets the remainder of the declared chemicals out, pressure should mount for Syria to revise its declaration again, to cough up the remainder of their offensive chemical programme,” she said, questioning whether Syria had weaponised its domestic chemical industry.

Chlorine, a so-called dual-use chemical that has industrial uses, is not on the list of chemical weapons submitted to the OPCW but was produced in Syria before the war. It should have been declared if the government has it, an OPCW spokesman said.

On Monday, opposition groups reported a further attack, this time 20 miles (30 km) northeast of Kfar Zeita in the town of Telminnes. Video footage was posted on YouTube by several opposition groups of men, women and children being treated in a field hospital.

Many appeared to have trouble breathing and medics held them down. One boy who looked less than 10 years old shook as a medic poured a liquid on his eyes and in his mouth.

A Reuters photograph of another young boy who had been transferred to a hospital closer to the Turkish border showed him lying dead on a stretcher with blood around his mouth. Medics said he had been exposed to chlorine gas at Telminnes.

Videos from the site of Monday’s bombing showed the same yellow canisters, this time twisted from an explosion.

Eliot Higgins, a British-based researcher who trawls daily through online videos of Syria’s civil war to verify weapons in them, said that these “chlorine bombs” have similar features to improvised barrel bombs the army has used in the war.

He said one bomb from Kafr Zeita shows metal rods, consistent with other large government barrel bomb designs, to hold the impact fuse plate in place.

Another video of an exploded barrel bomb shows a canister inside the barrel, which has fins on the back and what appear to be explosives around the top of the canister with a detonation cord.

“The interesting thing about these new videos is that there’s the same blue det cord you see in other DIY barrel bombs,” Higgins said.

Hundreds of videos confirm barrel bombs have been dropped from helicopters. Rebels have access to large rockets and missiles but there has never been a case reported of the opposition using air-dropped munitions nor commandeering a helicopter.

The OPCW mission to extract Assad’s chemicals has been beset by delays and inconsistencies. On Thursday, Reuters reported that Syria had submitted a “more specific” list of its chemical weapons to the OPCW after discrepancies were reported by inspectors on the ground, officials said.

Although it’s not public, officials have said the list includes more than 500 tonnes of highly toxic chemical weapons, such as sulphur mustard and precursors for sarin, as well as more than 700 tonnes of bulk industrial chemicals.

The OPCW, which is overseeing the destruction with the United Nations, has taken an inventory of the chemicals and facilities Syria reported to the joint mission, but has not looked into whether the list may have been incomplete.

“Chlorine has a host of commercial uses. Actually, it’s not very toxic. Sarin is probably 2,000 to 3,000 times more toxic. You and I can buy chlorine in a shop,” chemical weapons specialist De Bretton-Gordon said.

This makes it a grey area, he said, as industrial-use chlorine in canisters – which is what these bombs appear to be – is not strictly a chemical weapon until it is used as one.

Nevertheless, he says, “the OPCW and others have been frankly naive.”