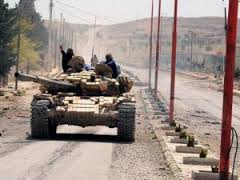 Syria will hold presidential elections on June 3, the country’s parliament speaker announced Monday, a vote President Bashar Assad is likely to contest, and win, as the country enters its fourth year of war.

Assad, who has ruled the country since taking over from his late father in 2000, has suggested he would seek another seven-year term in office, reflecting his determination to show he is the legitimate leader of Syria. He has strengthened his once-tenuous hold on power in recent months with a crushing military assault to recapture key urban areas, likely hoping to have them under government control before the vote is held.

The conflict, which began as demonstrations against Assad’s rule in March 2011, is now a civil war that has killed 150,000 people and forced one-third of the country’s population from their homes.

Anti-Assad activists immediately said they would boycott the vote, calling it a farce. World leaders have denounced Assad’s intention to hold elections with the country still engulfed in violence.

Parliament Speaker Mohammed Laham said candidates seeking to run for president may register their candidacy from Tuesday, April 22 until May 1.

“I call on the citizens of the Syrian Arab republic, inside and outside (the country) to exercise their right in electing a president,” Laham said from parliament in comments broadcast live on state-run television.

Syrians living outside of the country may start voting earlier, from May 28, Laham said. It was not clear whether he meant that to include more than 2.5 million refugees in neighboring states — an unlikely scenario due to logistical and political considerations.

Assad has not publicly said whether he would run, but in recent months he appeared to be in campaign mode, visiting areas recently retaken by his forces. State media have broadcast images of seemingly ecstatic residents welcoming the president during such trips.

On Sunday, Assad visited the ancient Christian village of Maaloula, where he projected the image of a protector of Syria’s religious minorities, many of whom feel threatened by the majority Sunni rebels.

The government has presented the elections as the solution to the crisis: If the people choose Assad in the election, the fight should end; if Assad loses, then he will leave.

In the chaos of the conflict, there are no official statistics on public support for Assad. But it appears Syrians are cleaved between those who support Assad and those who seek his overthrow, with many more mistrustful of all the country’s warring parties.

The armed rebellion is dominated by Syria’s Sunni Muslim majority, while Syria’s mix of Christian and Muslim minorities, including Assad’s own Alawite sect, tend to support the president, fearful of their fates should hard-line Sunni Muslims come to power.

The announcement raised questions on how the vote would be held, logistically, with hundreds of thousands of Syrians living either in rebel-held areas, contested areas, or under blockade by pro-government forces.

Highlighting security concerns even in areas under firm government control, the elections announcement Monday came just hours after a pair of mortar shells stuck some 100 meters (100 yards) from the parliament building in central Damascus, killing five people, according to state TV.

The announcement was expected since Syrian law says the vote must be held between 60 and 90 days before Assad’s seven-year term ends on July 17. Earlier this month, the Syrian parliament approved an electoral law opening the door — at least in theory — to potential contenders besides Assad.

The law states that any candidate running for president must have lived in Syria for the past 10 years and cannot have any other citizenship, apparently to prevent opposition figures in exile from running.

Hilal Khashan, a professor of political science at the American University of Beirut, said the election date was likely set for June 3 to give pro-government forces time to seize back key rebel-held urban centers in the northern city of Aleppo and the central city of Homs.

Aleppo is Syria’s largest city, while Homs is third largest. Parts of both cities are under rebel control. Assad has a firm grip on the capital, Damascus.

Syrian activists in Homs have said they expect blockaded rebel-held areas to fall, because fighters have been badly weakened by the surrender of hundreds of fighters, a lack of food, clean water and medicine, and after the government cut their key supply line on the Syria-Lebanon border in March. But Syrian fighters in Aleppo appear to be routing government forces in some contested areas.

“If the regime can control them, then it can claim to control the three largest cities in the country, which will give them a measure of legitimacy,” Khashan said. “That’s why they are waiting until June, hoping they can change the realities on the ground between now and then.”

He said elections were unlikely to lead to any real reforms — it was more of a move to show Assad was truly in power.

“Even the most despotic regimes want to give the image that they are the true representatives of their people,” he said. “Assad is no different.”